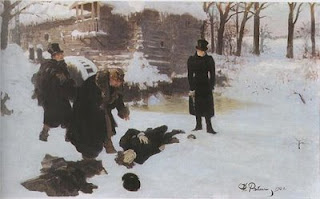 the ache/toská: No single word in English renders all the shades of toska. At its deepest and most painful, it is a sensation of great spiritual anguish, often without any specific cause. At less morbid levels it is a dull ache of the soul, a longing with nothing to long for, a sick pining, a vague restlessness, mental throes, yearning. In particular cases it may be the desire for somebody or something specific, nostalgia, lovesickness. At the lowest level it grades into ennui, boredom, skuka

I watched a version of Tchaikovsky’s Eugene Onegin and enjoyed it. Unfortunately that’s about all I can say…I just don’t get opera. The oldest boy did ask to watch “the movie where they sing the story” one night, so maybe the kids will appreciate it more than me. What I found interesting was how a slight change of emphasis at the end makes a world of difference. Pushkin highlights Onegin’s diminution over the last chapter, stopping just as he is about to be discovered by Tatyana’s husband—you anticipate further humiliation. Tchaikovsky leaves Onegin alone on stage, focusing on his despair. One of the last words he sings is toská, for which I’ve provided Nabokov’s multi-layered explanation above. Both are powerful endings but in completely different ways. (In the original opera version, the ending had Gremin catch Tatyana and Onegin together. Onegin leaves vowing to seek death. Tchaikovsky changed the ending before its professional debut.)

It shouldn’t take two months to write up Eugene Onegin, yet it did. The more I delved into it the more I enjoyed it. Pushkin’s style is very light and breezy, but his economy hides a depth of meaning and references. I’m fascinated by the response to the characters. Onegin’s rejection of Tatyana should endear him to the reader, yet it doesn’t. He has done the right thing and saved her from unhappiness (at least in theory), but his shallow self-righteousness turns the reader permanently against him as does treating Tatyana as just another plaything. He realizes his mistake and condemns Tatyana to a different hell. Both characters are doomed regardless of what Tatyana chooses at the end.

Below are a list of links on Eugene Onegin, Pushkin, and a few of his other works:

A tie-in between Pushkin, Repin, and Babel
A shortened version on Byron’s influence on Pushkin
Pushkin on Count M.S. Vorontosov
Discussion on Pushkin’s Mozart and Salieri
Pushkin’s poem “I Loved You Once” and Joseph Brodsky’s similar poem

You may be intersted that what I hope is a complete list of English versions of Eugene Onegin can be found on my website
http://www-users.york.ac.uk/~pml1/onegin/
Peter M Lee

Wow, thanks! I'll be sure to add that to the 'resources' page. I love seeing the different translations, too.