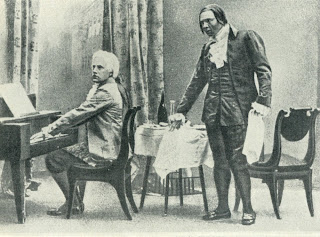 Thou shalt not, poet, prize the people's love.
The noise of their applause will quickly die;
Then shalt thou hear the judgment of the fool
And chilling laughter from the multitude.
But stand thou firm, untroubled and austere;
Thou art a king and kings must live alone.
Thine own free spirit calls to thee; pass on,
Make perfect the fair blossom of my dreams,
Nor ask for praises of achievement won.
Praise lives within; 'tis thou that art the judge,
And thine the strictest judgement of them all.
Art thou content? Then leave the herd to howl;
Leave them to spit upon thine altar fires
And on the dancing incense of thy shrine.

- To the Poet by Alexander Pushkin, translation by Constance Garnett

I finally had a chance to write about Eugene Onegin, but instead felt like posting something on this wonderful little “play” by Pushkin. Several other works used this short dramatic work as their basis: Rimsky-Korsakov’s opera Mozart and Salieri, Peter Shaffer’s play Amadeus, and the 1984 film of the same name (adapted by Shaffer and directed by Milos Foreman). While liberties are taken with facts, this is an amusing short work (9 pages in the library book I read). As with other of Pushkin’s works, it is crammed with insight in a brief and simple manner. For someone that billed himself as the Mozart of his day, this must have been delicious fun for Pushkin to write. Genius versus mediocrity seems to be a theme that Pushkin visited often.

The text can be found at Wikisource (translated by Genia Gurarie), or at Alan Shaw’s website (with a brief comments on the work...be sure to check out the rest of his site).

Quick links for Rimsky-Korsakov’s opera:
Opera Today
Joseph Shore (who has played Salieri) has a piece on the difficulties the Chamber Opera Theatre of New York had with their performance and existence (real life echoing the story).

For more on Mozart, In Search of Mozart is a documentary on his life. Information on Salieri can be found at The Metropolitan Opera’s Opera News. A comprehensive study of the Mozart / Salieri relationship can be found at the Apropos Mozart site—this is most of a chapter from John A. Rice’s book Antonio Salieri and Viennese Opera (the page has links to musical excerpts as well). The University of Texas School of Law has an in-depth study of the rumor (turned myth) of Salieri’s murder of Mozart in their Crimes Gone By section.

Scene I begins with Salieri remarking that while there is no justice on earth, neither is there any in the heavens. He recounts his self-denial and work that he put in dedicating himself to music. He approached it like a craftsman, learning the basics before allowing himself “creative fancy.” Salieri claims he has never felt jealous or envious of others until now:

O heaven, where,
Where is the justice, when the holy gift,
Immortal genius, comes not as reward
For any burning love or self-denial,
Labor, diligence or prayer, but lights
Its radiance instead in heads of folly
And frivolity?

(All quotes are from Alan Shaw’s translation)

Mozart enters, bringing a fiddler with him who mangles one of Mozart’s pieces. Mozart laughs at this but Salieri, placing art on a higher plane, cannot. Mozart plays a recent piece (he describes it as intruding gloom) and Salieri comments on the sublimity of it. Because Mozart can quickly compose a sublime piece like this, then stop at a tavern to listen to the blind fiddler, Salieri remarks that Mozart is unworthy of himself. The two agree to meet later for dinner.

Salieri decides he must be the one to stop Mozart, reasoning that he and other composers will be proved useless as Mozart creates even greater works. For someone that worshiped music and treated art as a gift from God, Salieri’s stated reason for killing Mozart is at odds with those beliefs. While Mozart provides glimpses of paradise with his music, the reason Salieri gives for murder is that Mozart will leave “no successor”. For Salieri, a composer that bases everything on what predecessors have accomplished, Mozart’s inimitability is the ultimate insult. So, his reasoning goes, Mozart must die in order to save art, the sooner the better. Salieri then undermines his “higher” reasoning when talking about the poison he will use. When tempted to commit suicide, he refused to take the poison himself for fear that he would eventually be inspired to create great works or he may witness a new Haydn. Yet now that he has witnessed such rapturous gifts in such a frivolous man, he is driven to commit murder. The envy at effortless (in his eyes) transcendent creations stand in stark contrast to his work and self-denial. Envy wins out, regardless of any reason given.

Scene II opens at an inn as the two composers dine. Mozart is gloomy, describing a mysterious man in black that has commissioned a Requiem. It’s clear that Mozart views this as Death, a subject he cannot shake from his thoughts. I found it interesting that Mozart is unwilling to part with his finished work—is that supposed to be true in general of all his works? Or only for this Requiem, something he makes clear he labored to create? When Salieri quotes his friend Beaumarchais, Mozart asks if it is true that the author once poisoned someone. Salieri doubts that Beaumarchais would stoop to that (“too droll a fellow / For such a trade”). Mozart agrees, saying “Besides, he was a genius, / Like you and me. And genius and villainy / Are two things incompatible, aren’t they?” Like everything else in Mozart's life, he insults Salieri without realizing it.

After drinking the poisoned wine, Mozart plays part of his Requiem for Salieri. Salieri weeps, both at the music and at the release he feels in murdering his enemy. Mozart misreads the tears, commenting that

If all
Could feel like you the power of harmony!
But no: the world could not go on then. None
Would bother with the needs of lowly life;
All would surrender to spontaneous art.
We chosen ones are few, we happy idlers,
Who care not for contemptible usefulness,
But only of the beautiful are priests.
Is that not so?

With this irony dripping off the page (stage?), Mozart takes his leave not feeling well. Salieri remains musing on his villainy and questioning whether it can exist with genius, his introspection both tortured and tortuous. Salieri’s final words pile the irony higher. Musing on Michelangelo’s alleged murder of the model Buonarotti, Salieri wonders if that is “just / A fable of stupid, senseless crowd”. Is that how Pushkin views the reader of this myth-based work? Doubtful, but given Pushkin’s identification with Mozart it is easy to see where he views himself in the genius versus mediocrity question.

Pushkin does a wonderful job of embodying two disparate views of art in his characters. Salieri places art on a lofty plane, able to justify murder in order to “save” it. Mozart’s quote above is in direct contrast to everything Salieri has worked for and the esteem he desires. Pushkin also pushes the idea of the sacred accessible through the profane. Salieri’s asceticism in his personal life carries over to his music. His repugnance of all things corporeal limits his reach for something higher. Mozart wallows in his humanness, enjoying life and obtaining something Salieri recognizes as divine. All of this in nine brief pages—highly recommended for happy idlers.

Thank you for this very informative post-there is little on Pushkin in the book blog world-I just did a post on his short story, "The Queen of Spades" in which I linked to your article-