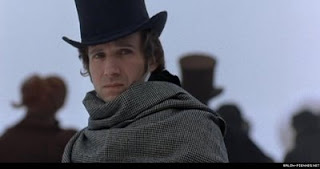 Never one to do things in a consistent order (or even an order that even makes sense), I wanted to write about this movie before discussing the book. So I apologize in advance for referring to the work without directly addressing it first. For those unfamiliar with Eugene Onegin, here is a brief synopsis shamelessly stolen from the Economist’s article on the film:

Onegin is a "lishny chelovek"--a "spare" or "superfluous" man. Bored and cynical about his life as a Petersburg dandy, Onegin dreads country life even more as he is summoned to the deathbed of his uncle. On arrival, he finds that his uncle is already dead and that he is master of a large estate. Perversely deciding to stay, Onegin is drawn despite himself into a minuet of Russian country life. He befriends Lensky, a poet, who introduces him to Olga Larin, his pretty but shallow fiancée, and to Tatyana, her sister, who falls deeply in love with him.

Inspired by the novels she reads to heed the call of her heart, Tatyana writes Onegin a passionate declaration of love. He rejects her, flirts with Olga instead and, when challenged by him to a duel, kills his friend, Lensky. Years later, he meets Tatyana again. She is now a married grande dame, and it is his turn to write letters of adoration--and Tatyana's, despite her love, to reject him.

Despite changes to the text and flaws in the movie (at least to me), I recommend the film. The framework of Pushkin’s story rolls with the changes while some extra touches add to the story. Since I’m recommending it, I’ll start with the positives first. Many events from the book are compressed but carry the story forward, sometimes more economically than the text. A few examples of the compression/expansion:

Much of the novel conveys an internal world, so the obvious question arises how to portray that world of feelings on film. Ralph Fiennes does a great job as the title character, letting his face and actions transmit what is going on beneath the surface. Liv Tyler got horrible reviews, but I think she did about as well as could be expected for the written role. Some scenes she carried extremely well, her pivotal rejection scene at the end, for example. Others…well, not so much. Some scenes it feels like Fiennes is making up for her lack of depth by overdoing it. Which is admirable, but distracting and overwrought. I’ll be happy to host a parlor game on who could have carried that role in 1998/1999.

And since I presented some positives, I’ll mention a few negatives that sprang to mind:

Which leads to the biggest disappointment for me. Pushkin’s playfulness and irony are rarely glimpsed. Some of the invented moments (Onegin letting the tutor know he is aware of his past, for example) show more subtlety and slyness than many of the events copied semi-faithfully from the story. I realize this would be a difficult task…how do you capture Pushkin’s simultaneous love and disdain? To make yet another allusion, this time to works influential on Pushkin, it is as if the movie tends to side with Byron’s Childe Harold instead of Don Juan. To me, the latter seems closer to the novel in tone and touch, a difference that alters what to highlight.

Also, Tatyana does develop in the movie but not as dramatically as the novel. Pushkin has her reach a level of understanding despite her feelings, something that felt muted in the movie. Yes, it’s there, but it didn’t have the same force (to me…as always, my understanding or interpretation is based on my limitations). One clue to the differences I felt in the movie (versus the novel) may be captured with Ralph Fiennes’ comment “It's about chances missed because you're so preoccupied with yourself”. Yes, that happens in the book but I don't think that is the central theme. While Fiennes goes on to highlight the note contrasts within the story (yes, getting warmer...warmer...), the movie seem to only hint at one of the (if not THE) central theme of the book: the contrast and relationship between art and life. I’ll expand on that more when I actually get a chance to post a discussion on the book. But the movie skirts around the edges of that theme nicely but never quite brings itself to address it directly. The many scenes taking place in Onegin’s uncles library or showing (the addition of) Onegin’s doodles lent itself perfectly as a springboard to explore the art vs. life theme. Not that it would have been easy—how do you capture the wealth of literary references Pushkin makes, for example? As it is, addressing that theme seems limited to a conversation between Onegin and Lensky.

As I said, I still recommend the movie on its own terms. As I mention in other film reviews, I don’t hold it against a movie when it veers away from the source material. If it stays true to the original spirit during additions or modifications, then I’m all for it. What struck me about Onegin, since I’m reliant on a translation from Russian to English, is that the movie represents an additional translation from English to the screen. Does it become too removed from the source? I don’t think so, but it does add some distance. However those that get the full impact of the original Russian may come to a different conclusion. If you’re so inclined, I also recommend Ralph Fiennes’ essay on “Shooting Pushkin”.