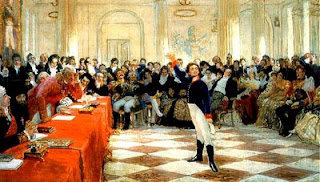 Alexander Pushkin was a member of the first Imperial Lyceum founded by Alexander I. (Several of his classmates would lead the Decembrist uprising.) The painting above is by Ilya Efimovich Repin. A quick overview of his life can be found at Rollins College's Russian Painting site, designed by Dr. Alexander Boguslawski. The Art Renewal Center has more of his works, and a wonderful article on Repin, Shiskin and Kramskoi by Steven Levin (highly recommended).

The reason I'm posting that picture is because it reminded me of a passage from Isaac Babel's "The Story of My Dovecote". An excerpt from the story can be found here, along with an interview of George Saunders. A little background on the story: the narrator (whose family goes by the name Babel, but it is not autobiographical) is preparing for an entrance examination to a prestigious lycée. Out of forty entry slots, only two were reserved for Jewish students (plus their questions were harder than for others). During his first year of attempting to enter the lycée, the young Babel loses his chance when a merchant bribes officials to accept his son. For the next year's entry examination, the young Babel has worked himself into such a frenzy that he momentarily goes blank during one of the questions, then answers (quoting Pushkin) while in a frenzied trance:

Behind my back, my family talked my tutor into going over the lessons for both the preparatory class and the first class within one year, and, as we were completely desperate, I ended up learning three books by heart. These books were Smirnovsky’s grammar, Yevtushevsky’s book of mathematical problems, and Putsikovich’s introduction to Russian history. Children no longer study these books, but I learned them by heart, line by line, and the following year Karavayev, the schoolmaster, gave me those unattainable five-pluses in my Russian language examination.

Karavayev was a ruddy-faced, indignant man who had been a student in Moscow. He was barely thirty. His manly cheeks blossomed with the flush seen on the cheeks of peasant children. He had a wart on his face from which a tuft of ashen, feline hair sprouted. Also present at the examination besides Karavayev was the deputy warden, who was considered an important figure not only in the lycée but in the whole province. The deputy warden asked me about Peter I, and a blankness came over me, a feeling that the end, the abyss, was near, a dry abyss surrounded by delight and despair.

I knew by heart the passage about Peter the Great in Putsikovich’s book and Pushkin’s poems. I recited the poems in sobs. Faces swarmed into my eyes, mixing and shuffling deep inside like a fresh deck of cards, while I, shivering, straight-backed, shouted out Pushkin’s verses with all my might, as fast as I could. I went on shouting the verses for a long time, nobody interrupting my crazed rambling. Across my crimson blindness, across the freedom that had taken hold of me, I only saw Pyatnitsky’s old face leaning forward with its silvery beard. He did not interrupt me, but turned to Karavayev, who was rejoicing in Pushkin and me, and whispered, “What a nation! The devil is in these Yids!”

(translation by Peter Constantine)
Posted by Dwight at 9:05 AM