Dying Every Day: Seneca at the Court of Nero by James Romm 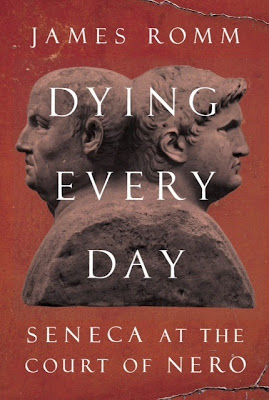 Seneca was born in 4 B.C. on the Iberian peninsula to the son of a accomplished rhetorician (Seneca the Elder). The young Seneca moved to Rome to study rhetoric and was introduced to Stoic philosophy. Entering politics he rose to the rank of Consul but ran afoul with Caligula. Banished to Corsica under Claudius (at the bidding of Claudius’ third wife Messalina), Seneca eventually returned to Rome to tutor the future emporer Nero, Claudius’ fourth wife’s (Agrippina’s) son. His writings include philosophical essays and letters along with chilling tragedies. Seneca became a close adviser to Nero on the emperor’s ascension to the throne. Nero spiraled out of control and Seneca was implicated in a plot to assassinate the emperor. Seneca committed suicide in 65 A.D. at Nero’s request.

How should we view Seneca? James Romm opens his book with divergent possibilities passed down through history: a Stoic philosopher, doing his best to minimize the actions of a deranged emperor, or maybe an opportunistic manipulator, enriching himself at others’ expense while hypocritically preaching virtue and ethics. Maybe a truer course in evaluating him lies somewhere between these two extremes, where “Seneca merely got more adept at weaving his opportunistic stratagems into the weft of his philosophic discourse” (page 217, footnote to page 14)

The debate ofver the appropriate view of Seneca began in his own lifetime and included some of Rome’s most famous early historians, adding to the difficulty in uncovering a “real” Seneca. Cassius Dio, relying on writers close to Seneca’s own time, paints a negative picture in his Roman History. The anonymous writer of the play Octavia (written around 70 A.D.) emphasizes Senca’s role as Stoic philosopher. The Annals of Tacitus walks between those two extremes, providing an ambiguous account of Seneca. As Romm puts it, “Seneca posed a riddle he [Tacitus] could not solve.”

There are two terms describing Senca that were used during or just after his lifetime, capturing the difficulty in a conclusive evaluation. On one hand Seneca is described by an ancient Greek term, tyrannodidasklalos (“tyrant teacher”), emphasizing his role as tutor to Nero, an emperor obsequiously lauded when he became emperor but eventually spun out of control. Pliny the Elder, though, provides the description princeps eruditorum (“princeps of the wise”), a wry phrase that may contain layers of irony.

While in exile Seneca wrote about how much he enjoyed his life in Corsica:

Why would any devoted Stoic, having found a paradise of Reason beneath a benign firmament, ever return to the cesspool [he] called Rome? The question goes to the heart of the enigma of Seneca’s life. Seneca’s friends and supporters recognized its importance, for the suggested, in the play Octavia, and elsewhere, that his return to Rome from Corsica, eight years after leaving the city, was not voluntary. But Seneca gives them the lie in his own writings. In a second open letter from exile, probably written a year or two after the first, Seneca showed, obliquely but urgently, that he was desperate to be recalled by the emperor Claudius. (28)

There are plenty of great characters around Seneca that come to life in Romm’s account. Central to the story is Nero, becoming emperor as a teen but lacking anything resembling a moral compass. Nero’s mother Agrippina viewed anything deviating from her plans, including Nero’s sexual partners, as subversive. There’s the dissent of Thrasea Paetus, a curmudgeonly senator who made a persistent show of not supporting Nero. Seneca found himself in the center of a scheming, violent world, where his guilt by association (and likely more) is probable in several murders carried out by or for the emperor. Just reading Seneca’s transparent lies in support of Nero leaves a bitter taste that could (and probably should) taint all judgment on his writings.

To partially mitigate some of that harsh judgment, Romm provides details on the nature of political power in Seneca’s time. The line of emperors had been hereditary (or some convoluted version) down to Nero. Regime change was extremely unlikely, carrying a high price for unsuccessful attempts, while simply mentioning it could prove an unhealthy exercise to the writer, his family, etc. In addition to these circumstances, what tied Seneca to Nero? Romm highlights how members of Seneca’s family were dependent on Nero's good graces, providing something akin to a hostage situation. There was the wealth that Seneca amassed since his return from banishment. It’s possible that Seneca believed he could soften Nero’s rule, avoiding situations that would be far worse without him as an adviser. There’s evidence that Seneca may have tried to escape from Nero’s court, or at least reduce his role. Unfortunately the moral stature that landed Seneca his job as Nero’s tutor kept him chained to Nero’s rule to provide legitimacy. Romm stresses the fateful return from exile, a decision that determined the remainder of Seneca’s life. Seneca revisited that decision, directly or obliquely, in his writings, most powerfully in his drama Thyestes.

Romm explores the two worlds of Seneca, political and philosophical, and admits he is unable to reconcile the “two Senecas together into a single personality.” While slightly emphasizing the political angle, Romm stresses the equality of the two worlds. A major focus of the book is to place Seneca’s work in a historical context, understanding what was going on politically at the (estimated) time of a work’s writing as well as what was happening in Seneca’s personal life. In evaluating any writer's work there is a question of how much of their personal life to attribute to the text, and Seneca’s writings raise the same issue. An additional drawback to this approach is the uncertainty of the timing of most of Seneca's work, so if Romm is wrong in his estimation then much of what follows could be called into question.

Romm stresses the need to read Seneca’s philosophical writings and his tragedies as a whole, even though they "inhabit two nearly opposite moral universes at the same time." (76) Despite the differences between the two forms—the tragedies contain plenty of despair and nihilism while his philosophical prose works are optimistic about humanity (linking piety, reason, and the gods)—they need to be evaluated together to provide a clearer picture of the writer.

Romm walks a fine line in the book by evaluating many of Seneca's writings as playing a "double game," which would "expound his Stoic ideals and improve his political image." (54) He makes it clear that Seneca's work should NOT be read for coded messages or ulterior motives, rather that his works have dual purposes and should be read accordingly. I have put together a summary of what I got from Romm's text on these dual purposes in some of Seneca's works (and added a few things I found strange about these works).

If you get turned around in following the Julio-Claudian family tree (as I do), Romm does a good job of describing the intricacies and importance of the relationships. Fortunately there are some helpful graphics available online, such as this one, to help keep things straight. It would have been nice to have something similar in the book, pared down for the principle characters and lines mentioned.

Romm’s writing (as in Ghost on the Throne: The Death of Alexander the Great and the War for Crown and Empire) is fast-paced and easy to follow. The question that lurked in the back of my mind while reading this, though, was who is this book written for (besides my obvious interest)? In focusing on Seneca’s careers and his writings in particular, the reader gets plenty of historical background on the author and Nero, but the book isn’t a biography of either man nor a complete history of Rome during this period. Romm stresses this point in advance. His focus is on reconciling the two sides of Seneca, a task he admits may be impossible. For someone that knows little or nothing about Seneca and wants to read his work, this book provides one way *how* to read him and what to look for in addition to the standard introductory summaries of his works. For anyone more familiar with the writer or the times, it would still provide a good overview on the arguments of how to view Seneca and his writings.

Romm explains how he arrives at many of his opinions given the many contradictory facts and opinions about Seneca. He doesn’t shy away from providing competing positions either…be sure to read the footnotes for some interesting places to dig deeper for various viewpoints. Romm may feel he has failed at unifying the two sides of Seneca, but he has succeeded in highlighting the human nature of Seneca and what that meant for both the courtier and the writer. Highly recommended.