The Expedition to the Baobab Tree By Wilma Stockenström 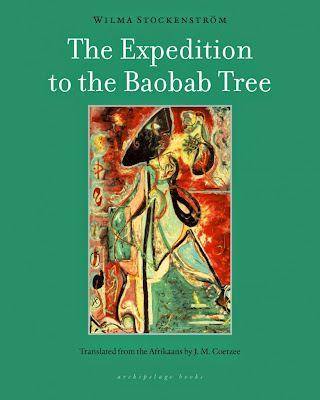 The insult of not being allowed to be human that I have overcome. All ugly visions too, of hairy huts and skew door openings that try to entice me in and lock me up, all false solutions, all wrong exits; for I myself determine appearance and reality. I rule. I dream outwards and with the self-assurance of those who have long ago discerned that it is all just appearance I smile to myself, follow my own path diligently, will drink this parting poison gift in the nourishing awareness that dream leads to dream. (117-8)

I have so much to tell of a trip to a new horizon that became an expedition to a tree. (34)

In this disturbing and lyrical novel we follow the many paths of a former slave’s memory. The narrator had been sold into slavery as a little girl, passed along to other owners once she has either served her purpose or her owner dies. The story begins with her describing her life in a southern African veld, where she now lives in freedom and relative safety of a baobab tree. Her life now provides plenty of time for her to muse on her past life as a slave and her current status as a free woman.

As a little girl she was captured along with other villagers and sold to an owner who specifically acquired young girls to deflower them. Although she gave birth to several babies they were all taken away from her and sold. Other owners have used, abused, or befriended her. Upon the death one owner his youngest son “inherits” her and treats her as a companion. She accompanies him on an expedition across southern Africa, where both of them are betrayed by her benefactor's oldest brother and left to die in the veld. She survives, barely, and makes finds a home in a baobab tree.

Stockenström avoids presenting a clichéd character by providing the unnamed narrator (none of the characters are given names) with complex, often contradictory thoughts. The mixed messages provide the most disturbing and realistic parts of the story, especially when she notes how much she enjoyed some of her roles as a slave. The narrator notes, “It was the privilege of a slave girl to have everything given to her.” She luxuriated in what one owner provided her, reminiscing, “I was the head slave girl of the richest man here. I had more power than many a wife. Love of ease characterized my life.” Compared to her free life she recalls that it was “pleasantly advantageous and easy to be property.” When reflecting on the mentality of several of the owners, she tends to see herself as a parasite, assessing her worth only by the price she brings in the marketplace.

Disquieting meditations also temper her initial enjoyment of freedom. She feels inferior to the beasts in the wild since she has little knowledge of survival—her former refinements are of no use here—while at the same time she becomes irritated when wild animals treat her as an equal (the correlations are too easy). She finds her language and intellect inadequate when she is unable to name things, such as trees or fruit, but she’s able to provide moving descriptions about how she feels. Her relationship with the “little people” of the bush turns problematic. She would have not survived without their help of food and clothes, but when she tries to obtain a formal recognition of her existence from them she realizes she has stepped over unspoken rules. Even though she relies on the “little people” for survival, it’s a voluntary arrangement on both their parts. She believes at times she only exists in dreams, hers and others, feeling most alone when she discovers a piece of ‘humanware’, which reminds her she has no one to share it with. “It is a strange experience to share a life without contact.” Given the nature of contact she has survived provides quite a pause for what it is she actually longs for.

Most of the second half of the story covers the expedition her last owner and his oldest brother take to discover an overland route to a rumored city. While the entire story is just over 120 pages and even that feels too long at times, this extended episode gives the narrator time to highlight the “dream of the unknown. The enticement of the foreign.” It also allows her to focus on the dissoluteness of much of the current owner's family while providing some detail on how she ended up living in the baobab tree.

The last few pages include several heartrending moments, the most moving for me was the narrator’s musing on death, leading to thoughts about her stillborn child:

I crouched in the belly of the tree and understood the flickering train of thought in my baby who had chosen darkness over the light of life. It was an ecstasy of never being. It was the only true victory: neither death nor life had meaning. It was equilibrium. It was the perfection of non-being. (122-3)

Is that what the narrator has been striving for? She reaches a state where she longs for nothing anymore, but that doesn’t seem enough for someone that has witnessed and experienced so many atrocities. It’s a disturbing journey through the many pathways of this former slave’s memory, which gives this short book its power. Highly recommended.

Excerpts can be found at Aymptote Journal and Guernica. The page at Asymptote also has a translator’s note from J. M. Coetzee.

Note: A version of this review is also posted at The Mookse and the Gripes.