Ghost on the Throne: The Death of Alexander the Great and the War for Crown and Empire 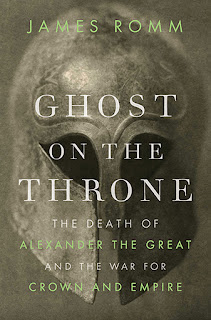 Ghost on the Throne: The Death of Alexander the Great and the War for Crown and Empire
by James Romm
Knopf, 341 pp., $28.95

This book covers in gripping detail the events that began on June 1, 323 B.C., when Alexander the Great became ill with what would be a fatal fever, and ended seven years later with the death or imprisonment of his two surviving heirs. It follows the machinations of the half-dozen generals who grappled for the right to succeed Alexander as commander of the army, as well as the dynastic intrigues that played out among the royals who had sole rights to the throne. For those intrigued by how Alexander won his empire, this book tells the equally compelling story of how that empire was lost, fragmenting into the rival blocs that would dominate the Hellenistic world for centuries.

The power vacuum after Alexander’s death was filled with everything listed above and more. The tumultuous week after his death saw a temporary solution headed by Perdiccas that began to disintegrate almost immediately. Romm’s book goes into detail of the many theaters of plotting and conflict that followed Alexander’s death. Here’s one of my favorite quotes, summing up some of the divisions occurring in the first four years of the internecine struggles :

Civil war, already raging in Alexander’s overseas conquests, was about to find its way to the Macedonian homeland. The pattern of mitosis that had beset the empire since Alexander’s death seemed to be recurring without end. First the royal army had split into two factions and designated two kings to take Alexander’s place; then the designs of Perdiccas had become split between two wives; finally all of Asia had been split by the falling-out of Perdiccas and Antipater, and by the war those two had handed down to their surrogates, Eumenes and Antigonus. Now Macedonia was splitting as well, between Cassander and Polyperchon, and with that split would come a division of the Greek world over which Macedon held sway. (page 205)

Anyone following this blog knows that I have been part of Reading Odyssey, Inc.’s book group that has been reading The Landmark Arrian: The Campaigns of Alexander, edited by James Romm over the last few months. Even though I had been immersed in all things Alexander for a while, I couldn’t wait to read this book because I find the subject matter fascinating. Most biographies on Alexander I’ve read condense the demise of his empire, hinting at additional events and intricacies that cannot be conveyed in a few pages. Another factor is that I enjoyed Romm’s book on Herodotus in the Hermes Book Series and his epilogue in The Landmark Arrian, titled “The Breakup and Decline of Alexander’s Empire”, the latter leaving me wanting more detail on the extraordinary events.

The elements in the breakup can be extremely complex but Romm does a good job presenting the major and minor ones, the combination of which, or sometimes the absence of which, lend or deny power to the characters in the history. Off the top of my head, here are a few elements that helped determine how the action unfolded:
- Location: where were the generals / satraps / bodyguards at the time of Alexander’s death and what was their sphere of influence.
- Leadership: how bold or clever were they? How much authority did they really wield? How did their personality come into play? How did they handle their enemies?
- The backing a leader had, in bodies and money, proved crucial,
- The loyalty a leader commanded played out in many different ways, whether in looking at the generation (Philip II vs. Alexander), country (Macedonia vs. Greece vs. others), from which strand of the Argeads they descended, or some other division that played out. Even loyalty within a unit, such as those soldiers called the Silver Shields, would sometimes trump everything else.
- Legitimacy, or at least the appearance of legitimacy, proved to be a tangled web with many possible components. Leaders would grasp at anything tangible (Alexander’s signet ring or even his corpse) or intangible (relations or nationality) to back them up in their claims.
- Fortune or fate: sometimes events seem to be above anyone’s control.

Over all the events that occur looms the ghost of Alexander, figuratively and at times literally. The vacuum in leadership, that no one claimant was able to completely fill, reinforces just how powerful a leader and personality Alexander proved to be. Alexander bequeathed fighting forces that had overrun much of the known world but they would also prove to be extremely deadly when fighting each other. The empire without borders and without nationality that Alexander dreamed of was shredded by his family and closest companions. I highly recommend Romm’s book for those looking to understand the turbulent and bloody transition of Alexander’s short-lived empire to “a multipolar world marked by rivalry, shifting alliances, and long-running small-scale conflicts”. (page 282)

I want to add a few words about the style of the book that I would think would prove useful for members of the reading group moving from The Landmark Arrian to this book. The cast in these events numbers several dozen while the settings for the conflicts and intrigues occur throughout Alexander’s vast empire. Keeping track of all the names and places can be difficult—I was already familiar with many and still got turned around at times. Romm does a good job of occasionally stepping back and summarizing the storyline to date which is helpful in keeping the overall picture in focus given his chronological approach, relaying events in bite-size chunks and moving around the empire as events happen. I also found helpful his way of “reintroducing” characters that not been mentioned in a while, helping me recognize or remember their role so far. Even so, a “cast of characters” broken down between royal family, military leaders and political actors would have been helpful. It’s a minor quibble and something I easily compiled to assist in keeping everyone straight. The bibliography is presented by subject matter, which I think will prove more useful than the standard method for non-scholarly readers like me. Also in the bibliography is a list of translated primary sources available on the internet--wonderful for geeks like me!

Update (2 Nov 2011): James Romm can be heard talking about his book online on the The Leonard Lopate Show.