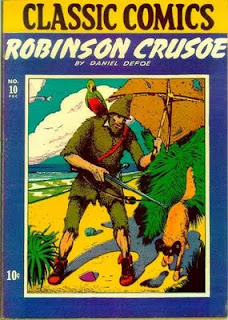 The cover of Classic Comics No. 10, April 1943
Picture source

I had trouble trying to discuss Robinson Crusoe, mainly because there are so many ways you can approach the work. One point I would hope to convey is that this is not just a kid’s book or a clichéd movie theme…the original work is worth exploring at any age.

Some online resources on Defoe and the work

Where I started reading Robinson Crusoe

I’ll include one more quote, one on Providence that Defoe develops over the work regarding the nudge that intuition can give us in ways to act for our benefit. A decidedly Puritan outlook on life, it is a message that runs through the book, even before Defoe calls attention to it:

I resolved it all at last into thankfulness to that Providence which had delivered me from so many unseen dangers, and had kept me from those mischiefs which I could have no way been the agent in delivering myself from, because I had not the least notion of any such thing depending, or the least supposition of its being possible. This renewed a contemplation which often had come into my thoughts in former times, when first I began to see the merciful dispositions of Heaven, in the dangers we run through in this life; how wonderfully we are delivered when we know nothing of it; how, when we are in a quandary as we call it, a doubt or hesitation whether to go this way or that way, a secret hint shall direct us this way, when we intended to go that way: nay, when sense, our own inclination, and perhaps business has called us to go the other way, yet a strange impression upon the mind, from we know not what springs, and by we know not what power, shall overrule us to go this way; and it shall afterwards appear that had we gone that way, which we should have gone, and even to our imagination ought to have gone, we should have been ruined and lost. Upon these and many like reflections I afterwards made it a certain rule with me, that whenever I found those secret hints or pressings of mind to doing or not doing anything that presented, or going this way or that way, I never failed to obey the secret dictate; though I knew no other reason for it than such a pressure or such a hint hung upon my mind. I could give many examples of the success of this conduct in the course of my life, but more especially in the latter part of my inhabiting this unhappy island; besides many occasions which it is very likely I might have taken notice of, if I had seen with the same eyes then that I see with now. But it is never too late to be wise; and I cannot but advise all considering men, whose lives are attended with such extraordinary incidents as mine, or even though not so extraordinary, not to slight such secret intimations of Providence, let them come from what invisible intelligence they will. That I shall not discuss, and perhaps cannot account for; but certainly they are a proof of the converse of spirits, and a secret communication between those embodied and those unembodied, and such a proof as can never be withstood; of which I shall have occasion to give some remarkable instances in the remainder of my solitary residence in this dismal place.