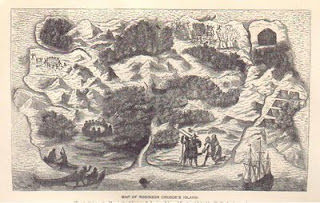 You are not to take it, if you please, as the saying of an ignorant man, when I express my opinion that such a book as Robinson Crusoe never was written, and never will be written again. I have tried that book for years—generally in combination with a pipe of tobacco—and I have found it my friend in need in all the necessities of this mortal life. When my spirits are bad—Robinson Crusoe. When I want advice—Robinson Crusoe. In past times when my wife plagued me; in present times when I have had a drop too much—Robinson Crusoe. I have worn out six stout Robinson Crusoe s with hard work in my service. On my lady's last birthday she gave me a seventh. I took a drop too much on the strength of it; and Robinson Crusoe put me right again. Price four shillings and sixpence, bound in blue, with a picture into the bargain.

- From The Moonstone, Wilkie Collins

It turns out there was quite a bit different from what I expected of Robinson Crusoe as well as many things I anticipated. A few of the major differences:

- Crusoe has two major shipwrecks before the one that strands him, becoming a slave after the second mishap. I have mixed feelings about the beginning of the novel, but in general I think it sets things up fairly well.

- The ending, where he treks over land to avoid sea-travel, was startling and felt badly out of place. I would say I hated the ending, but that might understate my feelings about it.

- Expecting to see him marooned without any assistance, Crusoe salvages the better part of his ship before it sinks. While many items are rudimentary and he knows how to use few of them, without the ship’s stores he would have perished quickly.

- I expected Friday to enter the picture earlier. Crusoe was on the island almost eighteen years before he saw another footprint besides his own, and it was (I believe) another seven before he saw (and rescued) Friday. As the full title mentions, he was stranded on the island a total of twenty-eight years.

- The evolution of the religious element, especially since it is nonexistent for quite a while in the novel. The discovery Crusoe makes involves more than just understanding himself. Developing his understanding of his relationship with God plays a major role in the story.

- I never knew viz., or videlicet, could be used so often (which is why I had to work it into the resources post).

Dickens’ comment about the novel may be true but the overwhelming irony between Crusoe’s nature, self-described as rambling and restless, and his isolated situation on the island (along with Defoe’s dry wit) can at least bring an occasional smile. Defoe’s language and focus reflect a very different approach to conveying Crusoe’s isolation from the rest of the world with what we would probably see today. Rich with details in certain areas, the reader can picture Crusoe’s life as he educates himself on many different aspects of survival and being. Yet other areas and details of his life and the island are missing. If I had to describe the island, I could give great detail on a few things but in some areas I would fall back on a ‘typical’ Caribbean island motif to fill in many gaps. Likewise Crusoe’s description of isolation can be over-detailed while in other instances it can be laconic. Hiding behind the economically described realization that he is the only survivor of the shipwreck resides a desolation that is conveyed with a brief inventory:

I walked about on the shore lifting up my hands, and my whole being, as I may say, wrapped up in a contemplation of my deliverance; making a thousand gestures and motions, which I cannot describe; reflecting upon all my comrades that were drowned, and that there should not be one soul saved but myself; for, as for them, I never saw them afterwards, or any sign of them, except three of their hats, one cap, and two shoes that were not fellows.

The language, like much of the story, is of a utilitarian nature. The focus while on the island revolves around survival and to do this Crusoe must work. He does not realize that the island is uninhabited or that the wildlife is not much of a threat. As has been noted many times, Crusoe is an Everyman, an ordinary person placed in extraordinary circumstances. His self-education and achievements are the results of resiliency and hard work, representing what man can achieve by simply willing things into being. It's a very Puritan outlook, to be sure, richly conveyed through Defoe’s morality tale. Crusoe, in a sense, follows his role as the prodigal son, but achieves (and surpasses) what his father had advised. Unfortunately neither parent survived long enough to see the return of their ‘lost son’.

There are many approaches available for writing about Robinson Crusoe since it covers many different aspects of human life. The book seems to be a type of Rorschach test where readers project their biases or leanings onto Defoe and/or Crusoe. Which explains how the introduction in my book can portray religion as simply another utilitarian tool, helpful only when Crusoe figures out how to make it useful. If that’s what you want to see, instead of his spiritual travail being just as important as his existential test, that’s all you are going to see.

Also of interest to me is how the tale can survive so many adaptations and still be entertaining. Glancing through a few versions in the children’s section of the library, it is easy to note that religion is effectively excised. The ‘marooned on an island’ story can be entertaining by itself (and maybe even more so to kids who can view Crusoe’s maturation and self-dependency as something they want to achieve). Still, I’m glad I have discovered the book in its original form for myself, even if it was later in life. The book survives because many of the messages and themes are timeless.

If interested in the book, I recommend visiting some of the sites on my online resources post as they go into much more detail on the work, in particular the work ethic and religious aspect of it.