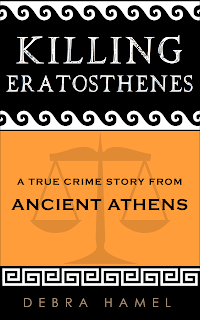 Killing Eratosthenes: A True Crime Story from Ancient Athens by Debra Hamel
CreateSpace Independent Publishing Platform: 2016 (978-1523995691)
My first introduction to Debra Hamel was with Reading Herodotus: A Guided Tour through the Wild Boars, Dancing Suitors, and Crazy Tyrants of The History, a great introduction to one of my favorite books, The Histories (and yes, a post on it is overdue). She has recently written a fun little book looking at a murder trial in ancient Athens. Although no accurate date is available for the trial, it would have been within a decade or so of 400 B.C. Here are a few quick comments on this entertaining and educational book.

Euphiletos was on trial for having murdered Eratoshenes, a man committing adultery with Euphileots’ wife. Lysias, a speechwriter included in the ten Attic orators of the Classical era, wrote the defense speech for Euphiletos. (Don’t confuse the murdered Eratoshenes with the Greek mathematician who calculated the circumference of the earth).

The defense speech at times seems full of Athenian comedic tropes with Euphiletos as the cuckolded husband. His main points lay out the story of the adultery and how he came to discover it as well as going into detail about what happened the night of the murder. Even though the prosecution’s argument is lost to history, the emphasis placed on the discovery of the adultery with witnesses as well as the non-premeditation of the murder show what Euphiletos would have been most worried about in establishing as fact.

While Lysias’ text is fairly straight forward (and can be found online in my notes below), Hamel walks the reader through some of the intricacies of the speech, what Euphiletos had to establish in his defense, and relevant social background that helps place the admitted murder in proper context. Here are two quotes straight from Lysias’ speech:

“Wherefore I, sirs, not only stand acquitted of wrongdoing by the laws, but am also directed by them to take this satisfaction: it is for you to decide whether they are to be valid or of no account. For to my thinking every city makes its laws in order that on any matter which perplexes we may resort to them and inquire what we have to do. And so it is they who, in cases like the present, exhort the wronged parties to obtain this kid of satisfaction. I call upon you to support their opinion: otherwise, you will be giving adulterers such licence that you will encourage thieves as well to call themselves adulterers; since they will feel assured that, if they plead this reason in their defence, and allege that they enter other men’s houses for this purpose, nobody will touch them. For everyone will know that the laws of adultery are to be given the go-by, and that it is your vote that one has to fear, because this has supreme authority over all the city’s affairs.” (Sections 34 – 36)

“I therefore, sirs, do not regard this requital as having been exacted in my own private interest, but in that of the whole city. For those who behave in that way, when they see the sort of reward that is in store for such transgressions, will be less inclined to trespass against their neighbors, if they see that you also take the same view. Otherwise it were better far to erase our established laws, and ordain others which will inflict the penalties on men who keep watch on their own wives, and will allow full immunity to those who would debauch them.” (Sections 48-49)

These were major arguments in Euphiletos’ defense. He has explained the circumstances he found himself in, how he did what the law allows him to do, and why finding him guilty of murder runs counter to the laws of Athens. Hamel does an extremely good job of showing how shadowy some of these argument actually are and how they might not fully acquit him. Let's just say the speech is slanted in his favor, and Hamel shows exactly why that is.

To put it another way, I would call Lysias' speech a modified Eric Stratton defense. (Please note these are my comments, not Hamel’s.) For readers who haven’t seen Animal House in a while, I’ll give the gist of the defense:

This is part of the direction of Euphiletos’ defense after he established the adultery part (lurid details that would have been entertaining for the jury). “I followed the law. If anyone or anything is at fault, it’s not me…it’s the law!” I’ll emphasize again, Hamel goes into detail while this is a reductionist summary, but I couldn’t help thinking of it in reading her analysis and Lysias’ text.
Highly recommended.

After reading the book, you can vote on the outcome of the trial

The Wikipedia page on Lysias’ speech

On the Murder of Eratosthenes by Lysias, translated by W.R.M. Lamb
Available at the Perseus Project

The work can also can be found in Loeb Classical Library # 244, starting on page 2 of the text.

In the notes on sources, Hamel also mentions a more recent translation by S.C. Todd published by the University of Texas Press. I’ve not had a chance to look at it, yet.

Something I thought more worthy of inclusion in the main text instead of the notes was a mention that John R. Porter has argued that Lysias’ speech was a rhetorical exercise instead of an actual case. That seems rather important, but upon further (albeit limited) investigation, there’s no way to know for sure (which is a good reason to relegate it to the notes, as I'm doing here, too). A helpful rebuttal to Porter’s argument can be found in Pavel Nývlt’s article Killing of Eratosthenes Between Reality and Mime (Or, was Lysias 1 Really Pronounced?). Despite believing the defense really occurred as written, Nývlt has to concede that it is possible the speech may be a modification to a real case for rhetorical practice or, as he believes and argues, the speech was genuine.