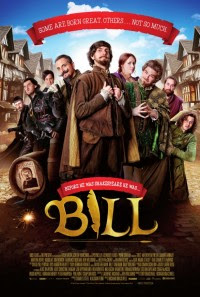 Last night my wife and I went to see the 2015 movie Bill, which has the tagline of "How Bill became Shakespeare." As far as I know, this was the only U.S. screening before its DVD release in the states next month. Thanks to Fathom Events for another wonderful media experience.

If you're familiar with the live Horrible Histories series, you'll know exactly what to expect with the movie (seeing as it's mostly the same people). The movie supposedly fills in some of the gaps of Shakespeare's "lost years"—how he moved from obscurity in Stratford-upon-Avon to a famous London playwright. Don't look for it to make sense...just let the lunacy and gags wash over you. And the gags come at warp speed. The musical group "Mortal Coil," after kicking Bill out of the band (for doing an extended solo on his lute), doesn't just leave...they shuffle off. After being told, "Saying things in a short snappy way instead of a long drawn-out way is the soul of wit," Bill asks, "You mean brevity?" When Bill stands on a stage in an empty theater that looks eerily familiar, you hear strains of music in the background that sound a lot like the Shakespeare in Love soundtrack. You get the idea, and either you enjoy this kind of humor or you don't.

Much of Shakespeare's entire career and the surrounding history of both Elizabethan and Jacobean eras are crammed into the few days during the Lost Years shown. The Gunpowder Plot of 1605 provides a crucial plot device (even though it's...well, I'm not really sure how many years earlier since I'm not sure what year it is exactly). And for me, that was the fun of it. There are running gags throughout about an espionage agent not understanding the meaning of a Trojan Horse. Lines from Macbeth and Romeo and Juliet get mashed together. There's a musical number providing a lot of insight into theater at the time. Christopher Marlowe not understanding some of the basic principles of humor. And even if some of the themes are ahistorical, it serves the purpose of the movie.

Catching the references. Understanding the sight gags. It may be geeky fun, but non-geeks can like it, too. Many reviews I've seen of the movie say it is Monty Python-esque, and while I don't disagree, I think the "Horrible Histories" people have established themselves well enough to say that it faithfully follows their franchise's family-friendly approach, even though it isn't officially affiliated. I look forward to seeing it with my boys, where they might actually learn something by accident. Which is the whole point of "Horrible Histories."

The showing had bonus content, with an introduction on special facts about Shakespeare and a behind-the-scenes look at the making of the movie, some of which I'm sure will be on the upcoming DVD release. All in all, a lot of fun if you like snarky humor. Definitely recommended.