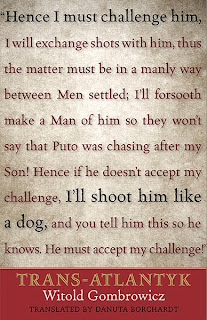 
The need for a new English translation of this novel has been well documented, but I'll point to Michael Orthofer's post at 'the complete review' for how bad the previous effort was regarded.

So is this translation a success? I'm not sure. As Gombrowicz and others have pointed out (mentioned at Gombrowicz.net),

Witold Gombrowicz himself qualified Trans-Atlantyk as a “parody of an old-time tale, in an old-fashioned and stereotypical genre.”

Inspired by the classics of Polish literature, this satire of Polish emigrants in Buenos Aires is a pastiche of the 17th-century Polish Baroque style known as Sarmatism.

I'm not familiar with the style so I can't comment on that. This translation of Trans-Atlantyk feels very similar in narration style to that of Ferdydyrke, also translated by Danuta Borchardt. The first few paragraphs definitely feel quaint, substituting metaphors of food rather than a story for example, but once the action in his tale begins I didn't notice much different from his other writing.

I do have a confession to make on Gombrowicz, though. Other than his Diary, I've felt his books and plays rather cold and I've been unable to initially 'connect' with them. Oh sure, there are many laughs at the outrageousness of it all but there's an initial distance between us. After I've finished and put the book down, though, his story worms its way into my thoughts and I can't stop thinking about it. I find myself revisiting sections of the book or play and feeling much more of a warmth and connection when reading it again. That held true for Trans-Atlantyk, too.

So, on to the story: A character named Gombrowicz, much like the author himself, finds himself stranded in Argentina at the outbreak of World War II. One night Gombrowicz finds himself befriended by the rich homosexual Gonzalo, who begs the author to assist in his seduction of a young Polish sailor. When the sailor's father figures out what Gonzalo is up to things become much more complicated. What is Gombrowicz to do? Is he going to help Gonzalo? Or is he going to help the father retain his son (for the moment, since the intention is to send him off to war)? Gombrowicz initially leans toward helping the father but soon he finds himself over his head, embroiled in plots from many directions. Gombrowicz's fascination and revulsion with many of the parties in this farce unmoors him and the scheming ends with everyone tangled in a heap (similar to how each scene in Ferdydurke ends). Everything and nothing is resolved.

Behind the farcical nature of the action lies the question of what a citizen owes his fatherland. Gombrowicz complains that he doesn't want to "incite the Son against the Father" and that "Poles are exceptionally respectful of our Fathers." While his questions are general at times, often they are specifically framed for Poland:

“Has the fate of the Poles been so delightful up till now? Hasn’t your Polishness become repugnant to you? Haven’t you had enough of Suffering? Not enough eternal Torture and Torment? Forsooth, today they’re tanning your hides again! You’re thus sticking by your hide? Don’t you want to become something Else, become something New? Do you want all your Boys to repeat in circles everything in the manner of their Fathers? Or, let the Young Guys out of the paternal cage, let them run free across the wilderness, let them likewise glimpse the Unknown!” (77)

There's a constant conflict in Gombrowicz's mind between the Land of the Sons and the Land of the Fathers. Where should his allegiance lie? With the torture and torment of the past? Or the promise, despite what it might lead to, of the future? Meanwhile, Gombrowicz pulls no punches in describing the Polish émigré community. The Polish envoy to Argentina leads the foolishness in many ways. He shows a slavish respect for formalities, such as anything read into meeting minutes must be adhered to, no matter how silly. His insistence that Polish troops are marching on Berlin, despite every newspaper report to the contrary, gives rise to many sad jokes. In the envoy's mind, the planned duel between Gonzalo and the Father provides an opportunity to counter the destruction of the Polish army, as well as providing Gombrowicz (the author, not the character) chances to comment on the war:

Thereupon, having shown the Duel to their Excellences the Ladies and to the invited Foreigners, they will thereby show their Manliness, Honor, Prowess, likewise their immeasurable Valor, Earnest Blood, their Steadfast Reverence, their Faith sacred and Invincible, their Power sacred and Highest, and the sacred Miracle of the entire Nation. (90)

The duel provides a metaphor for the war, where everyone leads each other deeper into the morass despite the lack of desire to do so. Everything becomes "Empty," theatrical, with action only for appearance's sake. It's almost as if the "impotence" of the country they are all experiencing will be offset with the sacrifice of a generation:

He wants to fight his Country’s enemy! And when his advanced years to Impotence condemn him, he gives up his only Son to the army to die or to be maimed. Hence he throws on the scale not only his Dearest Son but also his own emotions, an Old Man’s Sacrifice, heavy and bloody! But worthless is his Sacrifice. Not frightening his gray hair. Futile are the Old Man’s emotions! (121-2)

The struggle between young and old to the detriment of each other fits in with Gombrowicz's view of forms—the instant you rebel against a set form you establish a new form. Actions become only a gesture, a theatrical act where there is little behind the gesture. The heap of people at the end of the novel relieves the immediate tension but does nothing to offset the fact that the world is falling apart…the laughter is an inadequate mask / form. As I mention in the previous post on the novel and the quote from Czesław Miłosz, there is a tension between liberation and submission towards what is expected. Neither seems to adequately address what is needed or desired.

It's a tour de force of Gombrowicz's style and ability, something that didn't hit me immediately but wormed its way inside me. Very highly recommended.

I've been waiting to read this in Spanish, Dwight, and Gombrowicz has quite a number of fans in Argentina as you might imagine. Interestingly, what you've reviewed here sounds fairly similar to G's Argentinean Diaries, another book I must get back to at some point. Cheers!

There's a big difference between his Diary and his novels (# read = 2) and plays (n=1) that I've found, although Trans-Atlantyk does cover address some of the same topics he addresses in the Diary as well as reflecting ( in part) his own experience.

I have to occasionally remind myself when reading his Diary that he is manipulating and shaping the character of himself he wants the reader to see. Everything I've read so far by him, though, I definitely recommend.

I couldn't get a hold of a Spanish translation of the novel without too big of a headache, so I finally read the Yale Borchardt translation and am happy I did. I get the thing about the occasional trouble connecting with the fictional Gombrowicz, though; G's Diary is much easier to relate to on a first reading than parts of this were. Happy New Year to you, by the way!

Happy New Year to you, too! I'm glad you finally got to this book...despite the initial distance it's definitely a powerful novel.