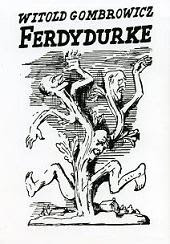 Previous posts on Ferdydurke:
Introduction: who’s read it is an ass
Source of the title? Freddy Durkee
The first chapter: do you know what it feels like to be diminished within someone else?
An overview: they’re NOT a bunch of harmless duffers
Online videos

Gombrowicz had published two stories that appear in Ferdydurke after the release of his first book: “The Child Runs Deep in Filidor” and “The Child Runs Deep in Filibert.” The first story is a philosophical parable on the conflict between synthesis and analysis. The second story looks at a tennis game that devolves into violence, absurdity, and insults. In both stories “the child runs deep” in several of the characters. Both chapters are fun reads and can stand alone, although the diversions they provide parallel the rest of the story quite nicely.

The prefaces to each story are the chapters where I want to spend the most time because they provide the heart(s) of the book. The chapter Preface to “The Child Runs Deep in Filibert” shows a playful Gombrowicz, belittling his own work while providing some of the motivation for this preface:

And again a preface…and I’m a captive to a preface, I can’t do without a preface, I must have a preface, because the law of symmetry requires that the story in which the child runs deep in Filidor should have a corresponding story in which the child runs deep in Filibert, while the preface to Filidor requires a corresponding preface to Filibert. Even if I want to I can’t, I can’t, and I can’t avoid the ironclad laws of symmetry and analogy. But it’s high time to interrupt, to cease, to emerge from the greenery if only for a moment, to come back to my senses and peer from under the weight of a billion little sprouts, buds, and leaves so that no one can say that I’ve gone crazy, totally blah blah. And before I more any further on the road of second-rate, intermediate, not-quite-human horrors, I have to clarify, rationalize, substantiate, explain, and systematize, I have to draw out the primary thought from which all other thoughts in this book originate, and to reveal the primeval torment of all torments herein mentioned and brought into relief. (ellipsis in original; page 193)

So what is the source of all thought in the book? What is the chief torment?

Gombrowicz goes on to list many “murderous torments” that lie at the base of the book, my favorite being “the symmetrical torment of analogy, and the analogous torment of symmetry”. The strictures placed on us all lies at the heart of three situations Joey finds himself—as a student at school, living with a bourgeoisie family, and watching the master/servant relationship. Gombrowicz makes it clear that immaturity has nothing to do with age or with innocence. I don’t see Ferdydurke as a celebration of immaturity, as is sometimes described, rather it strikes me more as a lament for that immature part of us put aside as we join society (or with whatever group we associate) and the related absurd strictures placed on us. The conflict between our outer appearance and our intimate self is resolved when we put on the Ferdydurkian mask.

The chapter Preface to “The Child Runs Deep in Filidor” covers a remarkable amount of ground in less than twenty pages. The heart of the book lies in the entire chapter, summarized in the short phrase: “A total inability to encompass wholeness marks the human soul.” (page 72) Gombrowicz focuses on forms in this chapter, how the forms are imposed on us and we let them define us. The next passage begins by looking at forms as it applies to writing but then expands its coverage :

Doesn’t all form rely on the process of exclusion, isn’t all construction a process of whittling down, can a word express anything but a part of reality? The rest is silence. And finally, do we create form or does form create us? We think we are the ones who construct it, but that’s an illusion, because we are, in equal measure, constructed by the construction. (page 72)

The only complaint I have about the book is that Gombrowicz seems defensive in this chapter. He distances himself from the critiques he makes in the book most of the time, but in this preface he goes after second-rate writers and the cultural aunts that judge art. Maybe I’m reading too much into it because he also provides a lament for writers that are second-rate. Gombrowicz spends a lot of time looking at the relationship of Art and Reality and how “art is the perfecting of form. … [W]e always, unceasingly, seek form, and we delight in it or suffer by it, and we conform to it or we violate and demolish it, or we let it create us, amen. Oh, the power of Form!” (pages 79-80)

Gombrowicz’s takes the irony of the situations he paints and blows them up to absurd levels. The forms do not hold in education at the school, nor with the family, and not in the master/servant relationship. Instead they get in the way of meaningful learning or interaction because their assumptions aren’t valid, leading to the “inability to encompass wholeness.” The forms are flawed because of their reliance on other people that are just as incomplete (or more so) as we are:

Isn’t it true that every being who is at a higher level of development, who is older and more mature, is dependent in a thousand different ways on beings who are less well developed, and doesn’t this dependence permeate us through and through, to our very core and to the extent that we can say: the elder is created by the younger? When we write, don’t we have to accommodate the reader? Just as when we speak—don’t we depend on the person we’re addressing? Are we not mortally in love with youth? Are we not obliged then, at every moment, to ingratiate ourselves with beings who are below us, to tune in with them, to surrender, be it to their power or to their charms—and isn’t this painful violence that’s being committed on our person by some half-enlightened, inferior being the most seminal of all violence? (page 83)

Gombrowicz’s solution sounds like a contradiction coming from someone criticizing forms—it’s to develop a new form, but one that recognized that “our element is unending immaturity.” His advice to writers can carry over to everyone: “Instead of fleeing from immaturity and shutting himself within the ambit of the sublime, he would realize that a universal style is one that knows how to embrace lovingly those not quite developed.” (page 84) It seems to be a tacit recognition that we need forms….just not the ones that are in place (or at least those in place at the time). Recognizing and dealing with our immaturity instead of falsely covering over it is the first step Gombrowicz recommends.

“It is the grotesque story of a man who becomes a child because others treat him as one. Ferdydurke aims at unveiling the Great Immaturity of humanity. The man, as described by the book, is an opaque and neutral being that must express himself through certain behaviors, and by consequence, becomes, on the outside—for others—much more defined and precise than he is in his intimate self. This causes the tragic disproportion between man’s secret immaturity and the mask that he wears to interact with others. He can only adapt in his inner self to this mask, as if he really were what he seems to be. We can say that the ‘Ferdydurke’ man is created by others, that men create themselves by imposing forms, or what we call ‘ways of being,’ upon themselves.”

Of course, Gombrowicz may just be pulling our leg and everything I read and everything I’ve posted is total bullshit. If ever a twinkle in the author’s eye comes through in a novel, it is on these pages. Highest recommendation.

One of many books I've bought ready to read and then quickly laid aside for no real reason until a more auspicious time. You've helped bump it back up the ladder a bit, Dwight, thanks.

Thanks. I should have made it clearer it's not for everyone, especially anyone with a low threshold for absurdity. I hope you enjoy it!