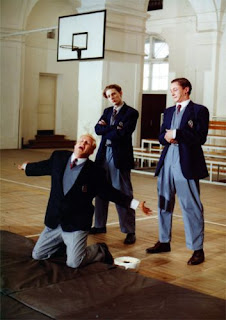 I was unable to find a copy of 30 Door Key, the 1991 English adaptation of Ferdydurke directed by Jerzy Skolimowski (who just directed The Avengers) and starring Iain Glen and Crispin Glover. All copies available on WorldCat were at institutions that don’t participate in interlibrary loans for audiovisual material. There are a couple of clips on YouTube that will have to do for now:

Joey meets the “modern girl” Zoo (Zuta), causing him to swing back and forth between the ages of thirty and seventeen. He unsuccessfully debates on how to act (Zoo is played by Judith Godrèche, who I’ve been in Ferdydurkian love with since Ridicule).

I think you would either need to read the book or be very familiar with the story in order for the scenes to make sense but they do give a good idea of the absurdity of the book.

Thanks to Artur Rosman and Dr. Leroy Searle at the University of Washington for letting me know about a 1985 Polish TV show that is available on YouTube. I only understand a word or two of it (especially “Pupa, pupa, pupa!”) but still found it well done in parts. Most of the clips are nine-minute bites for a total of just over two hours. During the low-budget PBS/BBC feel (reminding me of a series of extended SCTV skits) you’ll have to overlook Joey’s appearance as a 40-year old. I don’t recommend the whole series unless you’re really into Ferdydurke. If you have some curiosity, I’m listing what’s in each clip (it seems to follow the book fairly faithfully) so you can target what’s of interest:

Part 2: At school; faculty lounge; Pimko drops his note for the students; Kneadus vs. Syphon

Part 7: Being alone with a girl; Kneadus appears, visiting the housemaid; Kneadus dreams of his farmhand; beginning of fruit compote dinner; “Mommy”

Part 8: Dabbling in his fruit compote; bearded man with twig in his mouth; peeping; rummaging through Zuta’s letters; writes letters to Kopyrda and Pimko

Part 9: Spies on the Youngloods; Kopyrda and Pimko arrive; “Thieves!”

Part 12: Zygmunt and Joey; Kneadus slapped by Valek, fraternizes with the servants; aunt and uncle concerned about Kneadus’ behavior

Part 15: Joey and Zosia leave; they kiss; movie ends with Joey back in bed, alone