Ferdydurke by Witold Gombrowicz: who's read it is an ass 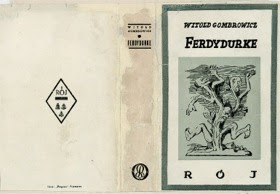 Since mash-ups are popular now, imagine a combination of Kafka (particularly The Trial), Voltaire, and François Rabelais. It turns out something akin to this combination has already been done in Ferdydurke by Witold Gombrowicz. Any description of the book will fall short of encapsulating it as the absurdity of the above description demonstrates but I'll include one at the end of this post. I’m not sure how well known the novel or author might be, although Gombrowicz seems to have an increased popularity in the English-speaking world in the past decade because of new or updated translations. I hope posts on this novel (and on his diary and Pornografia in the next few months) will help that momentum—he deserves it.

Published in Polish in 1937, Ferdydurke was translated into English in 1961 from French, English, and (possibly) Spanish translations. Finally in 2000 a direct translation from Polish into English was published by Yale University Press. Translator Danuta Borchardt comments on the importance of body parts and two particular words central to the story but difficult to translate:

The Polish word pupa (pronounced “poopa”) presented a special problem. It means the buttocks, behind, bum, tush, rump, but not one of these (nor any others that I considered adequately conveys the sense in which Gombrowicz uses “pupa” in the text. While the “mug” is Gombrowicz’s metaphor for the destructive elements in human relationships, the pupa is his metaphor for the gentle, insidious, but definite infantilizing and humiliation that we inflict on one another. We made the decision to stay with the Polish word.

Ferdydurke is a tragi-farce, in which events are often tragic and comic at the same time, and in which the mug and the pupa are the metaphors for violence and belittlement. Names of body parts are given meaning beyond the usual, often through wordplay. This wordplay is, whenever possible, translated literally. Some plays on words are impossible to translate—for example, Gombrowicz uses the fact that the Polish term for fingers and toes is the same word to create wordplay between “fingers” and “tiptoeing.”

For a work focusing on immaturity or inferiority and the two-way degradation in relation to maturity or superiority (and the way in which these relationships are breaking down), using body parts makes a perverse sort of sense. They are what the immature can understand and provide the perfect focus for the id run amuck. And there are a lot of body parts…as well as a lot of id. In the Foreword, Susan Sontag puts it perfectly:

Ferdydurke is one of the most bracing, direct books ever written about sexual desire—this without a single scene of sexual union. To be sure, the cards are stacked from the start in favor of eros. Who would not concur in the silencing of this social babble by the clamor of rumps, thighs, calves? The head commands, or wishes to. The buttocks reign.

So how does Gombrowicz do all this? Czeslaw Milosz in The History of Polish Literature has a succinct overview of the book's plot:

Ferdydurke’ is a story of a thirty-year-old whom a malicious schoolmaster-magician, Pimko, transforms into a schoolboy. The first part deals with the hero’s adventures in high school, where the teaching is frozen into formulas repeated ad nauseam and where the youngsters are forced to admire such and such a great poet only ‘because he is great.’ Moreover, the youngsters, when they are by themselves, submit to a frozen convention of ‘boys will be boys’ (dirty words, bragging, etc.). The hero, who is also the narrator, loses his battle for self-liberation, since his escape from high school ‘patterns’ merely lands him in a Warsaw family of young intelligentsia, and this means a new serfdom: progressivism, lack of prejudices, a daring approach to sex, everything that seems to be ‘anti-Establishment,’ but, again, is frozen in forms, rules, and canons. The hero escapes a second time, with the vague hope of recovering his authenticity in the countryside, not through any union with nature but through fraternization with a fellow man who personifies primitive health, the country lad. The third part recounts a new disaster, as on the estate where the hero lives, both masters and servants repeat automatically the gestures and attitudes prescribed for masters and servants.
(page 433)

I’ll have another post or two that looks at the story and a couple of side-trips taken during the tale. It turns out the original English translation of the novel did not have the author’s parting words, which I’ll include here.
"It's the end, what a gas,
And who's read it is an ass!"
W.G.


For more on Gombrowicz the info at gombrowicz.net provides a quick introduction and overview of his life and work. Translator Danuta Borchardt’s essay on translating Ferdydurke (adapted from a lecture) covers much of her notes in the book plus additional details about Gombrowicz’s life, how his work has been viewed, and additional difficulties in the book’s translation. Bacacay: The Polish Literature Weblog has several posts and links on Gombrowicz and his books.