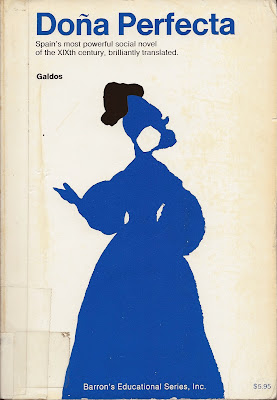 My erratic posting on Galdós’ novels resumes…hopefully I’ll have most of his English translations reviewed by the end of the year.

Doña Perfecta (1876) may be one of Galdós’ most read English translations and it's available at Project Gutenberg. I read the introduction by William Dean Howells and recommend it to anyone interested in reading the book. I’m reviewing the pictured translation, though, by Harriet de Onís. Her introduction, also excellent, covers more of Galdós’ career.

The story: José de Rey (Pepe) arrives in the decrepit town of Orbajosa to visit his Aunt Perfecta. Pepe’s father assisted Perfecta when her husband died, saving his sister from ruin and bankruptcy. She had promised her daughter, Rosario, in marriage to Pepe when the children had grown. Pepe’s father has just informed Pepe of the deal but puts no pressure on his son unless he wants to follow through on it. Pepe and Rosario quickly fall in love and plan to marry but Pepe, an engineer and very much a man of science, clashes with the traditional and religious fervor of Orbajosa. He suspects Perfecta of organizing a plot against him as numerous lawsuits attach to his property, he loses his position on a nearby project, and Rosario supposedly falls ill and is unable to see him. When Pepe confronts Perfecta she defiantly acknowledges her role in sabotaging his suit with Rosario and declares he will never marry her daughter. Pepe schemes to elope with Rosario but townspeople, whipped up by Perfecta’s anger, insure tragedy occurs.

Howells notes that Emilia Pardo-Bazan believed Doña Perfecta to be a transitional novel (and Howells agrees), only partially demonstrating the realism that would be his trademark in the next decade’s “contemporary” novels. Onís spells this out further: “The setting and the personages are abstractions, symbols which represent, in synthesis, the drama of nineteenth-century Spain.” (xi) The drama Onís refers to is the conflict between old and new, tradition and progress, religion and science. The characters in the novel aren’t the same fully formed people present in later works by Galdós.

Despite the ultimate tragedy, Doña Perfecta is full of humor. The names of the places and the characters establish the irony Galdós intends from the beginning of the novel. Orbajosa, said to be a corruption of urbs augusta, is anything BUT a majestic city. Pepe notes on his way to Orbajosa that the area and town names would make a blind man happy, “for it’s paradise to the tongue and inferno to the eyes.” The difference between intent and reality provide themes for much of the novel. The character’s names often provide laughs, too, Perfecta being the most obvious. Her Father Confessor is Inocencio, a former Latin scholar that remains innocent by washing his hands of impending tragedy in the manner of Pontius Pilate.

Perfecta turns out to be nothing short of a monster, using her religious faith as a cudgel while breaking every Christian precept in the process. Her fanaticism reaches absurd levels, especially at the end when she believes that she is the only figure that can absolve Rosario of her sin. She states her conscience is clear on all she has done and will do while believing changes in education and science undermine and corrupt the Christian faith. Pepe symbolizes progress, embracing scientific publications and changes of the times (the novel is set in the late 1860s). While damning Perfecta for her perversion of the Christian faith, Galdós seems to equally condemn Pepe’s contempt for traditions and customs. In both cases you have characters believing that they alone hold the true way and are intolerant toward anyone not believing as they do.

Behind this conflict is a divergence between the locals’ idyllic beliefs and reality. Galdós never explicitly makes a connection between the local town and Spain regarding such a divergence but Galdós prefigures later writers in showing a city, and by extension a country, resting on past laurels, many of which are illusory, while the foundation rots. His insistence that Orbajosa is neither near nor far from Madrid, that it could be any town in Spain, helps reinforce that extension—by being nowhere in particular it’s everywhere. The local historian shares the following idealized vision of the town with Pepe:

“Thanks to me, it will be clear that Orbajosa is the illustrious cradle of Spanish genius. But what am I saying? Isn’t their illustrious stock already widely recognized in the nobility, the chivalry of the present urbsaugustine generation? We know of few localities where the plants and shrubs of the virtues grow more luxuriantly, free from the noxious weeds of vice. Here all is peace, mutual respect, Christian humility. Charity is practiced here as in the times of the Gospel; here envy is unknown; here criminal passions are unknown, and if you hear talk about thieves and murderers, you may be sure they are not the sons of this noble land, or if so, that they belong to the number of those unfortunates who are led astray by demagogic preachments. You will see here the national character in all its purity—upright, honorable, incorruptible, clean, simple patriarchal, hospitable, generous.” (114-5)

Echoing the battles between Perfecta and Pepe is the conflict between Orbajosa and the Spanish government. Madrid may have earned much of the demonstrated contempt, but the disrespect from Orbajosa has a more organic origin, one that could be applied to conflicts of any nature. Orbajosa “boasted of a kind of rebellious independence, regrettable traces of anarchy which on occasion had caused the governor of the province many headaches. … In spite of its decadence, it still felt from time to time a violent urge to great things, even though they might prove in the end to be follies and barbarous acts. ” (129) These skirmishes echo the war between science and religion. Peasants bewail the audacity of the government while bowing to the authority of religion and the power of emotion. Perfecta plays this perfectly, calling the men of Orbajosa cowards to incite them to violence on moral grounds. Emotion proves more powerful than reason, even to a student of the enlightenment. One of Pepe’s letters to his father explains why he isn’t following his father’s prudent advice, blaming his uncontrolled passions of love and anger. Perfecta and Pepe both believe the problem comes from the other party and their actions are justified in response. A constant theme Galdós reiterates, whether in the lives of these characters or with Spain in general, is that passion trumps reasoning and leads to greater errors and catastrophes. Perfecta’s ‘reasoning’ demonstrates just such an instance: “God will send him his punishment by one of his own admirable means. The only thing we can do is to work to remove any obstacles to God’s designs.” (186) Needless to say, she isn’t just "removing obstacles" but taking an active role in Pepe's fate.

It’s far from Galdós’ best novels but still a wonderful read. As Howells notes in his introduction, Galdós shows an admirable management of the story and its characters. Definitely recommended.

Here are a few extended quotes to expand on some of these notes and give a taste of Galdós’ writing at this stage:

(Update: 21 Feb 2014) It's been acknowledged in several places I've seen that Doña Perfecta is based on Galdós own mother. Here's a footnote from the copy of Angel Guerra I'm currently reading (Pérez, Galdós Benito. A Translation of "Angel Guerra" by Benito Pérez Galdós. Lewiston [N.Y.: E. Mellen Press, 1990. Page 78) that provides more information on that point:

The portrait of Doña Sales is almost ertainly based on his mother, referred to by all the family as Mama Dolores. She was a loving but very domineering mother—so much so that the author is almost always known by Galdós (Dolores’ maiden name) rather than Pérez (his father’s name) or Pérez Galdós, as would be correct. Benito was the youngest of ten children, and only managed to give her the slip when she sent him off to study at the University in Madrid in order to separate him from what she considered to be a budding undesirable connection with one Sisita, the illegitimate daughter of an uncle. Once away, he steered fairly clear of the Canaries—and of her. He was close to his family and certainly loved her, but he seems to have felt it wiser to love her from a good safe distance. There is an earlier and far more horrifying depiction of her in the protagonist of Doña Perfecta (1876). The portrait in Angel Guerra is gentler, more disposed to give her credit for her strengths as well as her flaws.

I guess I need to get back to Fortunata y Jacinta this year so I can stop missing out on Galdós' "lesser novels" afterward. This review makes DP sound like a juicy read.

This might be the better introduction to Galdós. Even though the characters are more symbolic than real, it's still a fun read. Not to mention juicy. And much shorter. You'll appreciate what he did in F&J so much more, too.

And then you need to tackle La Regenta! Probably my favorite novel I've read in the last 10 years.

Great write up. I just finished reading Dona Perfecta (the Spanish version) and some of the quotes you refer to I had highlighted during my own reading of the book. Definitely worth the read and - I think - still carries relevance today. Thank you!