The End of the Old Times by Vladislav Vančura 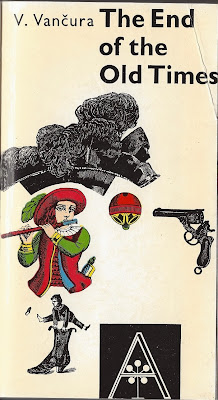 Something I get the feeling that when I say a book is a delight to read people seem to think I mean “lightweight” and “popular,” or possibly “frivolous.” I guess I’m sensitive because what’s available by Vladislav Vančura in English *is* lightweight. And delightful. I posted on Summer of Caprice a couple of years ago, which I enjoyed. Vančura’s output has been acknowledged as swinging between “enduring linguistic and narratorial challenges” and “more lightweight, popular works like Rozmarné léto [Summer of Caprice] and Konec starých časů [The End of the Old Times].” (from Chitnis, Rajendra A. Vladislav Vančura: The Heart of the Czech Avant-garde. Prague: Charles University, Karolinum, 2007, page 119) I’m excited that Twisted Spoon Press will be releasing Marketa Lazarová in a few months, a work that (according to Chitnis’ study) “represents an acceptable compromise between Vančura’s radical treatment of language and narrative…and his more lightweight popular works.”

As I noted in my post on Summer of Caprice, it is both superficially enjoyable while hinting at deeper meanings. The End of the Old Times performs the same feat even better. There are deeper meanings, but the meanings can be illusive or contradictory. Chitnis’ study highlights this last point by looking at “Vančura’s paradoxical attitude to contradictions, which he seeks simultaneously to overcome and preserve” (from the back cover).

So what is the novel about? Bernard Spera, the former librarian at the Bohemian castle of Kratochvile, recounts the time just after World War I when a colorful character visits and makes himself at home. Josef Stoklasa was the regent and hopeful buyer of the castle and grounds, which had been forfeited when the former owner fled the country during the formation of Czechoslovakia’s First Republic. Or as Spera puts it:

It was at this time, and in the circumstances which I shall describe, that Prince Alexander Nikolaievitch Megalrogov, colonel of the Czar Nicholas the Second, came to our estate. This man turned Kratochvile upside-down. He cast a spell on Suzanne, little Marcel, Kitty, Michaela, even my master, Josef Stoklasa. Through the activities of this strange man I lost Cornelia’s friendship, and when I afterwards wanted to achieve a closer relationship with Mademoiselle Suzanne she showed me the door solely on his account. I think it was the devil who sent this fellow to us. He tormented people with his mockery, caused no end of commotion, disrupted everything with his love intrigues, intrigues with truth and lies, money intrigues, and finally the intrigues of his companion, too, in which I detected a kind of poetic overtone. The Colonel was re-named BARON MÜNCHHAUSEN in our household. He is an adventurer, a conglomerate of deceits, beauties and graces which often ravished me, and which I curse now, hardly knowing where my next meal’s coming from. (12)

Megalrogov is a wonderful creation. Appearing out of nowhere and claiming to be a Prince and a White Russian colonel, he invites himself to stay at Stoklasa. He’s a charming throw-back to earlier times in his manner and zest for life. But his stories often change and, as Spera notes, some of them are adaptations of folk tales. A crucial scene seems to unmask Megalrogov as a fraud but appearances can be deceiving (a reiterating theme). His outlandish behavior and stories earn him the nickname of Baron Münchhausen among the castle’s servants.

An interesting, albeit minor, thread is the incorporation of political dynamics during the early stages of the First Republic. The change in power disrupts Stoklasa’s plans for buying the castle, mirroring the disorder Megalrogov causes while residing there. Spera, at times a spokesman for the author, muses on the divided nature of the new country: “My God, are we Czechs never going to achieve a sense of background, dissimulation and thematic unity?” (248)

Spera also embodies, in a sense, the debased new times. The librarian is a pale imitation of the lusty, lively Megalrogov. Vančura’s contradictions are present in Spera, who suffers from many of the same faults as the Russian, although on a smaller scale. He simultaneously recognizes his own errors and turns a blind eye toward them. When musing on what is going on in Stoklasa’s head at one point Spera’s rhetoric takes on the same exorbitant style as in Megalrogov’s stories. Spera acknowledges he is an unreliable narrator even when he claims omniscience. Megalrogov’s stories and Spera’s narration provide a constant challenge to what’s believable and what isn’t. But then Vančura, through Spera, explains why we find such imperfect characters entertaining while expressly noting the importance of accepting contradictions:

“The perfect man, in whom there’s no fault to be found, the man who’s fully worth of respect and love, is usually extremely unentertaining. Honour, the righteous mind, purity, smoothe out on their lathes every notch and every protrusion of the spirit, and in the end their products are bland, regular and symmetrical, so that you shrug your shoulders over them. Can you love them? No. Your spirit is at peace. To universal agreement you affirm their superiority, and not a nerve in you is moved (except, perhaps, that you may experience a lively desire to write rude words on the skin of such marmoreal beings). Then what, on the other hand, does move and animate you? Tension, conflict, the imminence of a fall. The single mark of beauty soaring from a heap of faults and errors. That moment when you can say yes and no, believe and deny, at the same time.” (200)

The new times also include members of the nouveau riche attempting (and failing) to adopt aristocratic ways. In looking at his master, Spera generalizes about the new moneyed class: “Whenever some boor insinuates himself into a duke’s breeches, he always bursts them.” (28) Members of the old aristocratic class classify the new times as a degradation. In a conversation Spera imagines between Stoklasa and Mr. Jacob (head of a political party in the region), the powerful man is supposed to have said, “In these times we live in,” sighed Mr. Jacob again, “one owes it to oneself to observe three things: to walk in down-at-heel shoes, to eat sausages, and to be as voluble as possible.” (136) Spera’s comments about Megalrogov near the end of the novel places the presumed Prince firmly in the camp of the old times, but adding a less than favorable twist. Spera notes that if Megalrogov allows two of the castle’s adolescents to accompany him on his journeys it would be “the end of the old times, my friend. The end of the journeys and the end of the seeking, the end of the secret, and the catalogue of your sins treading hard on its heels.”(296) So which period does Vančura think represents the better of the two?

As I mentioned in my alternate year-end post, this is a book I believe deserves to be in print with an English translation. Unfortunately the Artia edition is very difficult to find (and has plenty of typos). I’ll close with a few additional quotes to provide a flavor of Vančura’s style in the book:

My notes on the novel.

Email ThisBlogThis!Share to TwitterShare to FacebookShare to Pinterest
Labels: The End of the Old Times, Vladislav Vancura, Vladislav Vančura

I would really like to read this. Looks like finding a copy of anything by Vančura will be a little tricky, though. I'll have to see what I can do.

I was unable to find a copy to buy so I went the interlibrary loan route (through WorldCat). There weren't a lot available even that way.

I consider Antal Szerb a delight to read, but that doesn't make him frivolous, so I take your point.

This sounds great and very me. It's a shame translations are so hard to come by.

I'm hoping the upcoming release of Marketa Lazarová will be successful and more of his work gets translated.

Milan Kundera wrote a book on Vančura,which is quoted in the Chitnis study. According to Alex Zucker, though, Kundera has made sure none of his early Marxist-influenced works (like this one) are translated. If you haven't already done so, check out Zucker's essay on Marketa Lazarová, the movie and novel.