Summer of Caprice by Vladislav Vančura: I sampled some perch 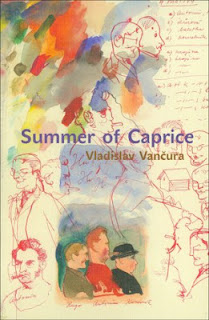 Vančura’s novel appealed to me because of the playful descriptions in a meandering story, combining the normal and ridiculous while highlighting the very special friendship between Antony Hussey (a bathing superintendent), Canon Gruntley, and the major. Their abrasive and insulting conversations (barely) mask their close friendship. The same could be said for the interaction between Antony and his wife Catherine—they are much more in love than they reveal to each other. When Ernesto the magician and his assistant Anna arrive in Little Karlsbad, though, the caprices of this group are given free reign. All three men attempt to seduce Anna, who seems a willing participant. Catherine, flirty and obstinate, moves in with Ernesto. The magician comes to regret both Catherine’s imposition and his visit the spa town.

The narrator’s comment of “Heaven help Ernesto, who lingered too long in Little Karlsbad” could include the other characters, too, who seem to have atrophied in the spa town and are unable to fully realize the opportunities presented to them. Their caprices, in other words, don’t live up to their desires. The humor is usually tongue-in-cheek, delivered with a straight face while the reader has to decide which side to believe in Vančura’s deliberate ambiguity.

One example…Antony, caught in a compromising position with Anna, claims he fished her out of the river Orsh and saved her from drowning (although the reader is led to believe something else had been happening). The next night, after Ernesto’s performances, the canon decides to visit the wagon where the magician and Anna live:

The canon paced up and down the pavements and was just at the point where he was making one of his repeated approaches to the waggon, when he observed its little door opening and two people stepping down from it. One of them was slight and the other, judging from volume, strongly reminiscent of Mrs. Hussey.

“I can see and recognise,” said canon Gruntley to himself, “the thin calves and the crooked thighs of the magician. I can see that good lady is going to fall into sin.” Then he extracted a book from his pocket and taking it in his hand he approached Ernesto’s abode. The window shone with a reddish glow.

“This very day,” he said, when the little window had opened slightly, “time and tide have already failed to wait. I should have been more careful and I should have given you this book at the very beginning, seeing that it contains beautiful narratives and several modest love stories which would be suitable for your hearing.”

“If you will allow me a moment,” replied Anna, “I have some fish in the frying-pan and I’m afraid that I might burn the dinner.”

“It is quite pointless to fuss about such things,” insisted the canon. “The fish are not fresh and it is not a day for fasting.”

“In that case,” replied Anna, “I will open up for you and you can be the one to turn the pan nicely over the fire.”

[Angry drunken townspeople pass by the wagon after this scene and pound on the wagon and jostle it. One of the drunkards pokes his head in the window only to have the canon hit him several times. The drunk’s companions, incensed at the attack, force their way into the wagon but the canon escapes. Asked about the events of the evening by his friends, the canon begins to explain…]

“I stopped in the square and meeting no objections I began to strike up a conversation with Anna, who was preparing a dinner of fried fish.”

“Did you join her in eating this meal?” inquired Antony, his face a picture of gloom.

“I sampled some perch,” replied the canon, “and it was the very fish that you had pulled out of the Orsh yesterday at midday.”

“That’s enough,” came the further retort from Antony, who proceeded to fly into a rage (because he couldn’t bear the idea that the canon had dined on his own fish with Anna), “Enough, keep your shameful little saga to yourself. It is not a subject fit for my ears. I know it already. O the ways of the poet-roué!”

In a novel where events and things have multiple meanings the reader may believe what he wishes to have happened. The characters often reminisce about past events but the reader (and the characters) finds any recollection suspect. Vančura sets a wistful tone, less for past times that were less than advertised and more for the special friendship between the characters.


Update - additional posts related to Summer of Caprice:
An introduction, with an excerpt from the book and from an interview with translator Mark Corner
A look at Jiří Menzel’s movie Capricious Summer