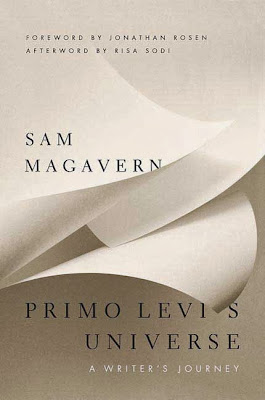 [W]hen we read all of Levi’s writings together, we find that he has woven a great and terrifying testament, one of the most vital bodies of work in modern literature. We find that his various writings combine to make a bildungsroman rivaling Proust’s. A bildungsroman, or “education novel,” follows the moral and psychological growth of its main character. In a minor bildungsroman, we watch a character adapt to an adult reality that we, the readers, already know. In a major bildungsroman, like Proust’s or Levi’s, we watch as the character finds and creates not only a self, but also a cosmos–a new interpretation of the world.

Levi’s main character is Primo Levi: a mostly factual version of himself created in a long series of memoirs, stories, essays, poems, and interviews. In Levi’s core work, he focuses on his youth: the classic age for the bildungsroman, the age of adventures. Levi’s youth included both adventure and tragedy; it did not end until his late twenties, when he returned from the war, married, and began working as an industrial chemist. But, as important as his youth was to him, Levi continued to grow and change–to re-work himself and his cosmos–until his death.

Sam Magavern goes through many of Levi’s works to support his claim that they provide the key to his life and the cosmos he created in his books. Magavern also intertwines Levi’s biography with his works to provide comparison and contrast between his his writings and his experiences. With this approach, “Primo Levi’s Universe allows us to appreciate how Primo Levi became Primo Levi.” (page 206, in Risa Sodi’s Afterword) While the book isn’t long, it is packed with plenty of information that will assist someone wanting to explore Levi’s books. Magavern investigates the cosmos and ethos reflected in Levi’s work, looking at how he recorded how we live and how we should live.

The central event in Levi’s life was his experience in Auschwitz, a subject he revisited many times in his stories. Magavern’s longest chapter focuses on the time at Auschwitz because of its importance in Levi’s life. The challenges from the Lager went beyond the test of survival. In Levi’s first book, If This Is a Man (the American title is the butchered Survival in Auschwitz), Levi presents his time in the camp as a descent into hell. In contrast to Dante’s circles of hell based on religious justice, Levi provides a senseless depiction of what a man can do to another man. The dehumanizing aspect of the camp, for the Nazis and the victims, troubles Levi the most. Evil does exist, and some of the worst characters in the book are prisoners. Recounting his experience tests the limits of language–words are inadequate when describing the unmaking of men. Later versions of the novel would soften his outlook as he added sympathetic characters and more literary passages, making the book less bleak. Magavern takes care to point out things Levi left out of the story or events he altered, providing as much information about Levi as what the author included. Because it’s a novel it is not meant to be a precise recounting. Instead, Levi attempts to provide deeper truths from the experience. Levi often noted that he may have not been accurate in his depictions beyond the literary licenses he took since memory is fallible, but there are other aspects of stories he changed that can be troubling. I’ll stop here regarding this book since I will have a separate post (or posts) on it.

Magavern also looks at Levi’s life after his return to Turin and compares his writings on family life, literary life, depression, retirement, and feelings about writing that appear in his works. Levi’s major influences appear in his books and poems in many different ways. Family members and friends (and enemies) are represented by characters in his works many times over. The influence from and references to favorite authors, such as Dante and Rabelais, appear often, too. While his dual experiences and dichotomous roles are often noted, it bears repeating that the tensions or contrasts in Levi’s life helped synthesize his works into something greater than the sum of their parts.

I don’t know that I’m completely sold on Magavern’s premise that Levi’s writings constituting a major bildungsroman, but his approach of discovering the man through his works provides a rich assessment on both his life and writings. Levi continually claims that language isn’t adequate to present what happened yet he finds a way to do just that, helping others understand what man is capable of doing, whether good or bad. In the meantime, Levi doesn’t task us to transcend our humanity and become something greater. Instead, he exhorts us to remain worthy of the name ‘man’ and prevent us from devolving into beasts.

All in all, this books is an excellent introduction to the man and his work as well as providing a very good companion when exploring his writings. Very highly recommended.