A Literary History of Alabama: The Nineteenth Century by Benjamin Buford Williams 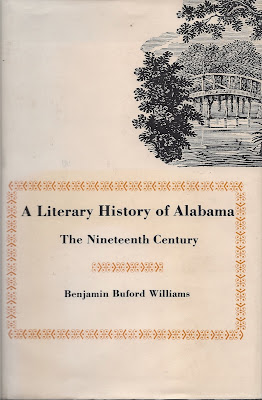 This post is dedicated to the memory of Dr. Ben and Marilyn Williams. I consider myself fortunate to have been friends of theirs.

This study is a biographical, bibliographical, generic, critical, and chronological survey of nineteenth-century Alabama authors. ... Creative writing in Alabama originated with the prose and verse published in local newspapers, and with the stimulus provided by the opening of the University of Alabama in 1831. ... In presenting a literary history of Alabama and bringing to light many lesser-known, but talented writers, and their works, Dr. Williams has expanded the current boundary of Souther and American literature. His contribution can only enrich America’s literary heritage. (from the book jacket)

This volume should appeal to readers interested in popular genres of the time or southern U.S. writers and personalities. The study covers some of the political history of Alabama since many of the writers were political figures, too. So are any of the works mentioned in the study worth reading? Fortunately Dr. Williams doesn’t sugarcoat the works mentioned, supplying qualifications (if necessary) for even the best works. I’ll run through some of the authors and their better works for exploring some of these genres. I’m not covering all the authors mentioned, focusing mostly on novelists, humorists, and famous figures.

Anne Royall was an author and newspaper editor on the Washington, D.C. scene, considered the first female journalist in the U.S. Her travel writings included the years she spent in Alabama. There are plenty of great anecdotes about her, including the successful trial against her for being a ‘common scold.’ While her literary talent wasn’t great, she provided some of the first widespread descriptions of the Alabama territory/state.

Next comes the intersection of the literary, political, and educational arenas of antebellum Alabama, focusing on William Russell Smith, Jeremiah Clemens, and Alexander Beaufort Meek: “These three men, Smith, Clemens, and Meek, thrown together by fate at the outset of their careers, along with their brilliant and gifted young English instructor at the University [of Alabama], Henry Washington Hilliard..., were to become dominant forces in both the political and literary arenas of antebellum Alabama.” (21) The influence of the previously mentioned opening of the University of Alabama in 1831 coincides with the time Tuscaloosa was the capital of the state (1826 - 1846). The city was considered one of a handful of cultural centers in the southwestern frontier. Mobile was another center, with both cities having many, varied publications (that usually didn’t last very long). Writing for many of these early authors was a part-time vocation:


The familiar pattern of lawyer-politician, and its variations of lawyer-editor, lawyer-historian, and editor-politician, is found in the biography of nearly every pre-Civil War writer in Alabama. It was not until the fifties that writing became, in any sense, the sole pursuit of the author. ... Professional authorship and the rise of Alabama literature were postwar developments, although the foundations for them were laid in the prewar years. (27-8)

So about some of these writers... William Russell Smith led a fascinating life, finding himself at the center of many historical events. His greatest contribution may be his history covering the speeches given during the January 1861 Alabama convention held to decide whether or not the state would succeed from the U.S. and his memoir (which paints a colorful picture of life in the early years of Alabama). Alexander Beaufort Meek was another lawyer/writer. His most famous work is Red Eagle, highlighting the significant Creek War of 1813-14 while weaving a love story with the history. Williams notes it isn’t a great American poem, rather judging some of the best poetry written in the area of the time. (Copies are easily found online) His best work may be Songs and Poems of the South, which includes better work while including “a theory of poetry based upon his earliest notions of the use of local themes and upon his later ideas of a literature distinctly Southern.” (52)

Outside of the literary periodicals, which were always failing for various reasons, the regional newspapers dominated the Alabama landscape with historical essays or humorous sketches. There were other fertile sources of literary interest, the most interesting to me was provided by Octavia Walton Le Vert and the salons she established wherever she went. She only wrote one book but her social and cultural impact spread far beyond it. Her influence covered not just Mobile and Alabama but America and Europe, too. Her travels provides a who’s who of social conquests.

Frontier humor and sketches became popular in periodicals of the time, and Alabama writers were included in those most read. John Gorman Barr provided many publicized sketches for local and national publications. Johnson Jones Hooper’s Some Adventures of Captain Simon Suggs, Late of the Tallapoosa Volunteers was a successful collection of sketches published in many formats. It provided fictional biographical sketches of a man who believes it is best to live “as comfortably as possible at the expense of others.” (73) Hooper’s humor varies from many other examples of the time by limiting the physical violence and focusing on Suggs’ shifty wit. These were some of my favorite pieces I read from this survey.

Joseph Glover Baldwin was another frontier humorist. The Flush Times of Alabama and Mississippi demonstrates Baldwin’s focus on writing a "chronicle of frontier life," with legal jokes that the average reader might miss.


Baldwin is remembered today for his droll sketches and anecdotes of life in Alabama and Mississippi during the years of transition that turned uncultivated and lawless lands, recently vacated by the Choctaw Indians, into the rich and law-abiding agricultural regions of those states. (94)

Two local colorists writing in a style similar to that of “Bill Arp” and “Uncle Remus” that I recommend sampling are Idora McCullan Plowman Moore and Louise Clarke Pyrnelle. Idora Moore wrote as “Betsy Hamilton,” providing sketches of Alabama hill country and tales from plantation slaves. Louise Clarke Pyrnelle wrote similar stories but from the Alabama Black Belt, further south than Moore, in order to keep “alive many of the old stories, legends, games, hymns, and superstitions of the Southern slaves.” (102) Her plantation sketches in Diddie, Dumps, and Tot (1892) includes a slightly different version of “The Tar Baby” than that of Joel Chandler Harris’ Uncle Remus stories, which came out two years earlier. “Her writings and those of Idora Moore constitute the best of Alabama’s prose local-color stories before the turn of the century.” (104)

A few other writers of interest, providing information of a bygone era, and including some successful novels of the time:


Williams also surveys several Alabama poets, dramatists, and historians, which I won’t go into detail here, but Williams provides remarkable research on authors and topics usually forgotten in the particular but remembered in general (such as Abram Joseph Ryan’s ‘Lost Cause’ poetry). Williams’ survey and study provides plenty of information and resources for anyone interested in studying nineteenth-century U.S. literature. The only suggestion I could think of was adding a map or two to highlight all the cities and regions of the state mentioned as well as a timeline of relevant Alabama history. While I didn’t need the maps (nor will anyone that is a serious student of the region), I’m sure some people would benefit from them. Regarding the timeline, Williams does a good job of explaining the history so this suggestion probably isn’t needed. Very highly recommended.

Update: Many of the links were incorrect in the original post. Hopefully all are fixed now. If not, please let me know. Thanks to William Michaelian for the heads up that something was wrong.
Posted by Dwight at 6:27 PM