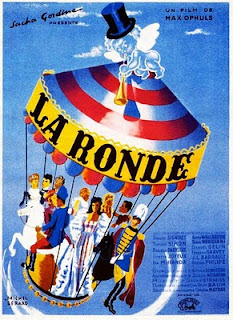 Note: See this post for more detail on the play and storyline.

The elegantly structured Arthur Schnitzler play La Ronde lends itself to a movie adaptation and in the hands of director Max Ophuls, who made some wonderful additions, it’s a pleasure to watch. Ophuls keeps the spirit of the play intact, using the same storyline and many of the same lines. Ophuls uses a merry-go-round as the central motif, replacing the round dance of the title and it works extremely well (and lends itself to a wonderful gag for the young man’s impotence). The biggest addition, though, is master of ceremonies Anton Wellbrook. He pushes the action along, providing the hint of a narrative so there is more than just ten separate scenes. In addition to tying the movie together, the emcee also becomes a character in the scenes. If he interacts with the female characters he “directs” them, telling them what to do. When interacting with the male characters the emcee appears in a role consistent with the story.

Fortunately Ophuls doesn’t try to make La Ronde something it isn’t, focusing on the wit and irony of the human state Schnitzler developed in the play. There’s no real backstory for the characters—they simply exist as stereotypes of their role, displaying the societal expectations and judgments of that role. They are allowed to develop as individuals during their liaisons when cajoling or deflecting advances, then ruminating or running away after sex. Since each character (other than the emcee) has two love scenes with two separate characters I found it interesting to note the differences in the way they interact with their two paramours. For example, the husband keeps his wife emotionally at arm’s length while he becomes passionately attached to the sweet young miss. Personal inconsistencies are nothing new but Schnitzler humorously highlights their exaggerated nature when it comes to passion and Ophuls emphasizes the differences.

Both the play and the movie highlight an unsettling topic—passion may be durable but its subject need not be. Or to put it more directly, is it sex that makes the world go round instead of love? The emcee seems resigned that this has been and will be the case, but there’s more than a hint of melancholy in delivering this sentiment. Even though the act is never actually shown, the power of sex remains on full display—it overcomes all social and class barriers in the play and movie. To complicate things further, time after time the relationships are less than satisfying. For such a simple storyline there are plenty of emotional layers and insights.

Other things I loved about the movie:

The acting is superb, combining up-and-coming talent with established French actors. Ophuls doesn’t rely on gimmicks—he lets the actors carry the scenes. Did I mention Simone Simon and Odette Joyeux are in the movie? (Did I say that out loud?)

The simple feel of the movie hides the complicated technical work. There are many long shots of extraordinary length that provide a natural feel to the scenes. See the opening sequence with Anton Wellbrook as he moves across several (literal) stages in the link at the end of the post for a great example.


The movie is available in sections on YouTube. Sample it and enjoy (embedding disabled for the video—click to see the opening scene from the movie), and if the movie interests you be sure to check out the specials on the Criterion Collection DVD.

Another promising title, Dwight. I think I'll save my first Ophüls till after I recover from my Renoir letdown, but the things you say about his talents here back-up what made me purchase The Earrings of Madame de... when Criterion rereleased that round of Ophüls films a few years back. The critics really seem to appreciate his work.

I'd like to get to more Ophuls soon...this was fun. Hopefully there are some good extras on The Earrings like there were on La Ronde.

I've been meaning to watch this ever since I read the play and Schnitzler's short stories and novellas. I think he an extremely interesting writer.
I'm not sure I've seen any of Ophüls movies.
Thanks for the review.

My pleasure. I just checked out a collection of his stories. I enjoyed Road to the Open very much and I'm hoping these are just as good.