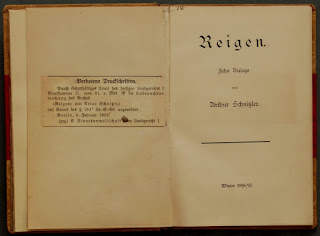 Arthur Schnitzler’s play La Ronde (Reigen in German), written in 1897 but not performed until the winter of 1920/21, looks at a chain of ten sexual encounters. While known by several names depending on the language of translation, the title, named after a circular dance, often goes by La Ronde since France was the one country Schnitzler allowed the play to be performed after the initial riots and complaints in Berlin and Vienna. An English version, translated as Hands Around, can be found here (no translator noted other than it was ‘authorized’).

In general each of the ten scenes focus on a pair of lovers, fades out for their sexual encounter, then returns for a post-coital conversation. Each character appears in consecutive scenes, except for the prostitute who starts and ends the play. The scenes as listed using the linked translation's names are as follows:

1. The Girl of the Streets [Prostitute] and the Soldier
2. The Soldier and the Parlor Maid
3. The Parlor Maid and the Young Man
4. The Young Man and the Young Wife
5. The Young Wife and the Husband
6. The Husband and the Sweet Young Miss
7. The Sweet Young Miss and the Poet
8. The Poet and the Actress
9. The Actress and the Count
10. The Count and the Girl of the Streets

As you would guess from such a topic and structure, Schnitzler was very open on sexuality despite the veiled language used at times. The structure goes well beyond the alternating couples. The one licit coupling appears at the center of the play between the wife and husband, but even that scene involves the exertion necessary in a marriage (as opposed to the exertion needed for…other things) in addition to the baggage that is brought into a marriage. In a sense, this is the most complicated pairing in the entire play.

There are other devices used in the structure that adds to the play. Generally there is a rise in class from scene to scene until we get to the count and a shift back to the lower class with the prostitute--we have come full circle. To complicate that pairing with her and the count, the sex happened the night before, or so she says…the count can’t remember. Another part of the structure I found interesting was the transition between male dominance in the pairings early on that transitions to female dominance in the latter pairs. Or maybe it would be more correct to say the female sexual power is better disguised in the early pairings.

The play is fun to read to see how each pairing unfolds. It’s clear both parties are willing participants early in each scene, the woman sometimes putting up the appearance of resistance for propriety’s sake. Her actions usually don’t match her protestations, though. The resistance is more pronounced in the earlier scenes, less so in the latter ones. There’s more to explore in the pairings, especially the similarity between scenes with the common character. Often there is a hitch in the pairing, the funniest (to me) is the temporary impotence of the young man in Scene Four. His discussion of Stendhal after the disappointment leads to a successful conclusion. So to speak.

Highly recommended. It would be easy to dismiss the play as simple fun that Schnitzler intended for his friends but the deceptions, and more importantly the self-deceptions, lend themselves to deeper meaning. The married couple provides the most philosophical pairing as the husband waxes eloquently on friendship, love and passion while the wife provides a wistful counterpoint, sardonic at times. His simultaneous understanding and ignorance yields some of the funniest lines of the play. The wife complicates things by bringing up past lovers while the husband does his best to evade the topic. For all his bluster, the husband sums things up rather well:

Husband: If we hadn’t sometimes forgotten that we are in love with each other during the five years we have been married—we might not be in love any longer.

Young Wife: That’s beyond me.

Husband: The case is simply this. We have had perhaps ten or twelve love-affairs with each other [in five years of marriage]…. Doesn’t it seems that way to you, too?

Young Wife: I haven’t counted them!

Husband: If we had enjoyed the first one to the last drop, if I had from the very beginning surrendered without restraint to my passion for you, the same thing would have happened to us that has happened to millions of other lovers. We would be tired of each other.


Update: I've added some comments on the play in my post on Max Ophuls' 1950 movie version of La Ronde.