The Eyewitness by Ernst Weiss 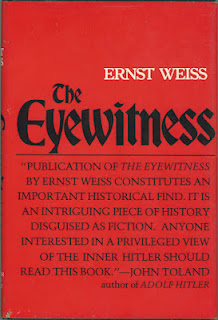 With the years going by, emptiness is growing around me. I am still living, feeling, having desires and hopes. I do not fear death itself, but I dread the hour, when, out of exhaustion, there is no more hope left within me for anything.
- Ernst Weiss, 1933

The Eyewitness follows the life of an unnamed narrator in Germany from the end of the 1800s to the late 1930s. The narrator, trained to be a doctor, serves in various capacities during World War I and at the close of the war treats patient “A.H.” for hysterical blindness. After the war he closely follows the rise of Hitler and the decline of the German mental state. The narrator’s early life repeats some of the same troubling family dynamics as in Georg Letham: Physician and Murderer. The troubled father-son dynamic he’s employed in both novels I’ve read make me wonder to what extent he’s using that symbolically—his own father died when he was five (or four, depending on which biography you read). While struggling to become a doctor, he emphasizes his passive role in life as an eyewitness, eager to learn while remaining dispassionate. He believes he is an objective viewer of life until a defining moment makes him realize there is evil in the world: “I realized that my former view of the world had been too neat, that I had not seen much because I had not wanted to see it.” The echo of this willful blindness is seen in several characters, particularly his mentor, in addition to the German collective. The outbreak of World War I provides the narrator a chance to examine the role of the individual and the state during this particular crisis.

As time moved on, the whole nation entered into war service, which gradually included everything in its jaws and which never gave up anything. No more great and small; everything was valuable in the mass, valueless singly. Whether an attack was worth a hundred thousand lives or “only” ten thousand was determined by the strategic situation. None of the people who died was asked. All swore an oath because to refuse to swear was suicide. All obeyed. This was their honor. A few technicians conducted the war, technicians who were specialists and who did not trouble themselves as to why it was happening and when or how it would end. There were only strategic, political goals—no moral, religious ends. The nation was God. Everyone was assigned a place—there he had to stay, to work or to shoot or to labor in a factory. Most people were glad, however, that they were not asked. Such passive obedience dulled worries, conscience, fear about life.

The section with the treatment of patient “A.H.” allows the narrator to look at Hitler’s appeal and how best to treat him:

- “Out of a political movement a religion developed.”
- “He was really a man with a quick mentality; he was intelligent, but when he lied, he believed that he was telling the truth. He captured others by means of his idealism; he moved them with his simplicity, and many followed him without question. They did not want to think, to doubt again.”
- “‘Without scruples, brutal’—these words occurred in his case history again and again.”
- “His motto was: God helps those who help themselves. Everything is permitted to the stronger. Even the slightest respect is too much for an opponent.”
- “I had to approach this man not with logical premises but with a tremendous lie in order to conquer him; for he lied, probably not in the single detail with deliberate purpose, but in his being, for he was really one gigantic lie for whom there was no absolute truth but only the truth of his imagination, his striving, his urges.”

With the healing of the patient, the narrator temporarily steps out of his role as an eyewitness and became a participant, complete with corresponding feelings of grandeur. “Everything happened as I wanted. I had played fate—God…”. He reverts back to his observational role at the end of the war, describing what it was like to be carried along by a political movement in general and specifically what it was like to attend a meeting led by “the corporal.” The narrator goes into great detail on Hitler’s early political speeches, including their message (hatred of the Jews unsurprisingly occupies a central role), the techniques used, and the impact they had on the crowds. The narrator’s comment on having helped his patient—“Was he not my production?”—expands the meaning of “my” to include Germany and Europe. The narrator’s story parallels some of German psychiatrist Edmund Forster’s life (see my introduction), including imprisonment and torture. Instead of committing suicide like Forster, though, the narrator eventually finds a purpose in life, although choosing to help the Spanish Loyalist cause in the civil war was akin to suicide. The fascinating part of the second half of the novel is Weiss’ clear analysis of Hitler’s continued rise to power and his horror at watching events unfold: “His hatred was a source of monstrous power.” The earlier sightlessness of the corporal becomes symbolic of his blind hatred and the country’s heedless obedience.

The narrator’s exhortation to himself not to commit suicide also sounds like it could be Weiss’ own determination to live as an eyewitness, which lasted until June 1940 when he took his own life as Paris fell to the Germans.Weiss considered this novel rushed—he wrote it in less than two months in order to enter it in a competition by the American Guild for German Cultural Freedom for the best German novel by an exiled writer. While the novel was awaiting judgment he spent six months revising it and sent a letter to the Guild:

”I would like to inform you that in the meantime I have considerably restructured this novel and essentially deepened its artistic message. The first version I sent you was composed in too short a time for it to meet my standards. I believe that half a year’s serious work on The Eyewitness has been successful.”

The revised manuscript has not been found. The debate about Weiss’ access to Hitler’s treatment records has, at times, overshadowed this compelling rough draft of a novel. The narrator’s admonition, and probably Weiss’ as well, about the impossibility of conveying what it is like to fight in war and also encompasses the difficulty in explaining the psychological effects of living in interwar Germany with the rise of Hitler:

What I describe is only the external consequences. The monster, grinding, crushing, consuming, the splendid bestiality, the barbaric happiness and intoxication cannot be described. In a quiet room one cannot write down the words so that someone else alone in another quiet room, his cigar in his mouth, his dog at his feet, can understand this and then know how one feels.

Note: the link to the previous post on the novel again: What, then, wrought that change?

Email ThisBlogThis!Share to TwitterShare to FacebookShare to Pinterest
Labels: Ernst Weiss, The Eyewitness