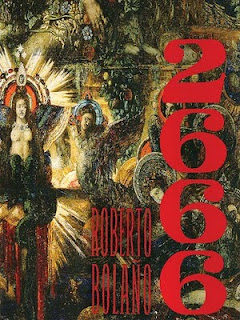 …there was something revelatory about the taste of this bookish young pharmacist, who in another life might have been Takl or who in this life might still be writing poems as desperate as those of his distant Austrian counterpart, and who clearly and inarguably preferred minor works to major ones. He chose The Metamorphosis over The Trial, he chose Bartleby over Moby-Dick, he chose A Simple Heart over Bouvard and Péuchet, and A Christmas Carol over A Tale of Two Cities or The Pickwick Papers. What a sad paradox, thought Amalfitano. Now even bookish pharmacists are afraid to take on the great, imperfect, torrential works, books that blaze paths into the unknown. They choose the perfect exercises of the great masters. Or what amounts to the same thing: they want to watch the great masters spar, but they have no interest in real combat, when the great masters struggle against that something, that something that terrifies us all, that something that cows us and spurs us on, amid blood and mortal wounds and stench.

More detail on Roberto Bolaño and his final novel, or five separate novels if he had had his wish, can be found on Wikipedia's biography page and at the book’s summary page.


I’ll include a summary of the book from the review in The Washington Post since it is more concise than I could be:

While the murders of Santa Teresa occupy the center of the novel, the perimeters make for the most satisfying reading. In the first of the novel's five semi-independent parts, we're told how three European literary critics became obsessed with the work of a mysterious writer named Benno von Archimboldi -- think B. Traven or Thomas Pynchon. They travel to Santa Teresa after hearing the elusive writer may be there researching his next novel. Part 2 concerns an Archimboldi expert currently living in Santa Teresa and watching over his daughter, who seems destined to be another victim in the femicide epidemic. In part 3, a black American reporter travels to Santa Teresa to cover a prizefight and becomes embroiled in the ongoing murders. Part 4, the longest of the novel's five parts, is a numbing chronological account of individual murders from 1993 to 1997, narrated in police-report fashion, along with digressions on various officials, policemen, lawyers and reporters involved in the cases. And finally, part 5 is a mesmerizing account of how a strange Prussian boy became the enigmatic Archimboldi, an author neglected at first but considered Nobel-worthy after he's rediscovered by the scholar-detectives of part 1. We also learn his real reason for going to Santa Teresa.

So what to make of the book and does it live up to the hype? After finishing the book I envision Bolaño smiling from beyond at everyone reading his book, laughing with the reader at any puzzlement and confusion rather than laughing at them. But I may be wrong…he may be laughing his a** off at me.


One probable clue when reading the novel lies with the artist Giuseppe Arcimboldo, the artist chosen for a character's nom de plume:

Giuseppe Arcimboldo (also spelled Arcimboldi; 1527 - July 11, 1593) was an Italian painter best known for creating imaginative portrait heads made entirely of such objects as fruits, vegetables, flowers, fish, and books — that is, he painted representations of these objects on the canvas arranged in such a way that the whole collection of objects formed a recognizable likeness of the portrait subject.

All of which should lead the reader to believe that Bolaño intends to build a “recognizable likeness” of something using the disparate parts of his novel. This is the first book by Bolaño that I’ve read and I certainly enjoyed it but probably not to the same level as the praise heaped on it.

I loved Bolaño’s natural, graceful style. The imagery he invokes, such as “orifices of mud” (noted by Patti Smith) can be haunting, the image often lingering in the mind for many pages. The parallel stories, not just between sections but also within them, provide histories that have been hidden from view or understanding from the reader and the characters. Bolaño’s non sequiturs often hint at something deeper, causing the reader to constantly look for meaning where there may or may not be any. What initially looks like an aside may be the closest thing to a resolution the reader will receive. The power of the fourth book, “The Part About the Crimes”, floored me. The clinical precision in describing the murders numbs the reader to the violence behind the crimes, which I think is precisely Bolaño’s point.

Bolaño’s style embraces an incomplete approach, rarely finishing a thought or storyline without introducing more threads. The point at which Bolaño chooses to end a thread, though, can be telling. One example: the end of the book has the writer Archimboldi discussing the history of a particular brand of ice cream with the descendant of the brand’s founder. As the ancestor's additional achievements beyond the ice cream are revealed, the question arises about how a person's legacy will be shaped and transmitted. A fitting ending for Bolaño and the book.

So do the disparate parts provide a portrait of something identifiable in the same manner of Giuseppe Arcimboldo? I’m not sure it does. While 2666 is more than a detective story without closure, the overall portrait (at least in high resolution) remains elusive. Which may be exactly the point. Think of a Venn diagram containing two circles that only touch at one point—this is the only thing in common between the two sets. Now add a third circle that may touch one or both of the existing circles at precisely one point each. That diagram reflects how the book feels (although some sections contain more overlap than just one point), expanding the scope and size of area covered without bringing the overall set into focus. Whish is not to say there aren’t a few constant motifs and themes. The prevalence of dreams (which at some point I found annoying) lends an otherworldly feel to the book without delving into the mystical. The college professor Amalfitano’s descent into madness, complete with imagined voices and erratic behavior, adds to the surreal nature of events. Ironically within the descent, Amalfitano’s section contains clues on how to look at the book. The professor’s exploration of a geometry book, made up of three parts “each independent, but functionally correlated by the sweep of the whole” seems a clumsy attempt to ‘sell’ 2666’s structure. The repeated reminders of the textbook that Amalfitano hangs up on a clothesline on a whim, in order to see what happens when abstract theory or art meets reality, could have been dialed back some—at some point I wanted to assure Bolaño that we understand his message.

One of the persistent themes is spelled out by the writer Archimboldi when he declares that history is a series of instants "that vie with one another in monstrousness." The evil associated with those instants, which include more than the murders in the fourth book, will cascade and can overwhelm the reader. The fifth book, “The Part About Archimboldi”, contains atrocities committed during World War II on the German eastern front in addition to many other murders outside of war. If the point was to make the murders in Santa Teresa (a thinly disguised Ciudad Juárez) seem less aberrant in a world gone mad, then Bolaño was successful.


Some things seem overblown, such as one character saying about the Santa Teresa murders “the secret of the world is hidden in them.” The confluence of the maquiladoras located in Santa Teresa with narcos acting with impunity provides fertile ground for the murders. But the key is the broken justice system, where politics impede investigations.

Maybe the ultimate key comes from an artist held in an asylum who believes that “we find communion” from the maelstrom of the world with a “senseless God making senseless gestures at his senseless creatures.” Seen from this vantage point, the structure of the book reflects the chaos surrounding us. What if instead of an Arcimboldo painting, Bolaño’s five books construct a mirror in which we are supposed to see ourselves and the world around us? 2666 can deliberately frustrate readers searching for ultimate meaning in all the beauty and violence painted within the book. If nothing else, Bolaño achieves his own “great, imperfect, torrential” work, a book that blazes “paths into the unknown.”

And if the book is simply a lterary version of a Fürst-Pückler-Eis treat in the perfect season, there's nothing wrong at all with that, either.

There is a lot about literature in 2666, something I failed to address in depth. As with many other threads and things...but when you're looking at summarizing a work this sprawling, something's going to be left out.

I was happy to see Savage Detectives at the local library, and I definitely want to read it later this year.