The Sovereignty and Goodness of God discussion 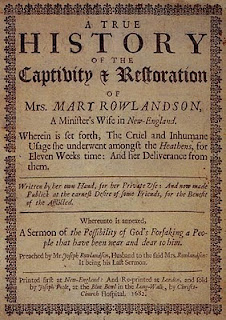 Before I knew what affliction meant, I was ready sometimes to wish for it. When I lived in prosperity, having the comforts of the World about me, my relations by me, my Heart chearfull: and taking little care for any thing; and yet seeing many, whom I preferred before my self, under many tryals and afflictions, in sickness, weakness, poverty, losses, crosses, and cares of the World, I should be sometimes jealous least I should have my portion in this life… . … If trouble from smaller matter begin to arise in me, I have something at hand to check my self with, and say, why am I troubled? It was but the other day that if I had had the world, I would have given it for my freedom, or to have been a Servant to a Christian. I have learned to look beyond present and smaller troubles, and to be quieted under them, as Moses said, Exod. 14:13, “Stand still and see the Salvation of the Lord.” (page 112 of The Bedford Series version I recommend)

Mary Rowlandson's book, going by different titles, can be found free of charge at Project Gutenberg (HTML or plain text) and at LibriVox (audio).

I highly recommend the version published by The Bedford Series in History and Culture in which Neal Salisbury provides an introduction to the work as well as including several "related documents", some of which I'll mention.

Mary Rowlandson’s account of her captivity by the Indians during King Philips’ War was one of America’s first bestsellers. Some background: Mary Rowlandson, wife of Lancaster, Massachusetts minister Joseph Rowlandson, was taken captive by Indians on February 10, 1675 and held for almost three months. Mary faced hardships and heartbreak during this period, being separated from her two oldest children and having her youngest child die in her arms. She traveled with her Indian captors across Massachusetts, Vermont and New Hampshire in twenty journeys, or “removes”. By proving herself useful to her captors, Mary increased the chances of her survival. Her narrative conveys her fortitude and faith in dealing with her ordeal. The narrative of her experience may not resonate with today’s audience but it provides a wonderful insight into the world of both the settlers and the natives. During her captivity she met Indian leaders such as King Philip, Weetamoo, and Quinnapin.

I had often before this said, that if the Indians should come, I should chuse rather to be killed by them than be taken alive, but when it came to the tryal my mind changed; their glittering weapons so daunted my spirit, that I chose rather to go along with those (as I may say) ravenous Beasts, than that moment to end my days; and that I may the better declare what happened to me during that grievous Captivity, I shall particularly speak of the several Removes we had up and down the Wilderness. (page 70)

A few thoughts on the book:
Mary’s faith was an obvious comfort to her throughout her captivity. To the modern reader it almost becomes a joke when any little thing can cause her to remember some scripture that applies to a particular situation, yet it is important to remember the overall circumstances in which she found herself. The reader also knows that it is a foregone conclusion that Mary will live, and her writing style can help foster that feeling. During the journeys, seeing death delivered for any reason (a woman and her baby tomahawked for complaining too much, for example) could not have made her ransom and rescue seem inevitable. Despite the cruelties meted out by the Indians, they were also capable of great kindness to her. Whether supplying her with a Bible or providing her with food and shelter, there were plenty of Indians that assisted her. The harshest treatment seems to have come at the hands of Quinnapin’s wives, Weetamoo (more powerful than her husband in her own right) in particular.

Mary’s attitude toward the Indians could not have helped matters. She had obviously never met an Indian she liked. Even the “Praying Indians” come in for abuse. It seems clear she lets the sins of a few (a Praying Indian who was later seen participating in an attack as one example) cloud her outlook toward all natives. A theme moving underneath the surface of her book, which has to be unintended, concerns the lack of barriers between the natives and settlers. The Indians had adopted many facets from the Old World (languages, tools, weapons, etc.) while the settlers were adept at implementing native methods for surviving in the new and different setting. Another major theme running throughout the work revolves around the difficulties and hardships encountered by the Indians. Their constant movement, a way of life before the settlers appeared, becomes a military tactic as well. Unfortunately the nonstop “removes” highlight the necessity of movement in order to procure food and find allies, oftentimes failing at both. In addition to hunger and weariness, a disheartening atmosphere descends on the Indians. Late in Mary’s captivity, the Indians are victorious in battle but fail to celebrate as they had in previous circumstances. The Indians realize their cause is lost at some point which facilitates Mary’s ransom.

The Bedford Series I recommend includes the following “related documents” (among others):

1) An excerpt from John Easton’s “A Relacion of the Indian Warre” (1675), which lays out the Indian case against the English. Easton met with Philip (Metacom) with the hope of resolving some of the differences between the groups. Easton goes into detail on the Wampanoag Indians’ grievances.

2) “The Examination and Relation of James Quannapaqua” (January 24, 1675). James Quanapohit (spelled differently in the document) and Job Kattananit were released from internment in order to spy for the English. James' report, gathered at great risk to his life, makes clear the English should have known that Lancaster would be attacked (and knew it three weeks in advance). Quanapohit’s report was discounted because the source was an Indian, underscoring the settlers' mistrust of the natives. Only when the settlers allowed Indians to assist significantly in the war and adopted some of their tactics did they prevail.

3) Joseph Rowlandson’s final sermon was included in the first publications of Mary’s narrative. His sermon underscores her story: the New Englanders had alienated God and brought down his wrath in the form of King Philip’s War. Redemption was a possibility if settlers hewed closer to God. His sermon, “The Possibility of God’s Forsaking a People” provides a textbook example of a jeremiad. This outlook also runs throughout Mary’s narrative.

Update (23 Feb 2011): This article at American Heritage covers additional aspects of Rowlandson's adventure. I liked this summary of her book: "part adventure story, part spiritual autobiography, but mostly an extended sermon reminding New Englanders of the power and mercy of Him who had saved one so unworthy."