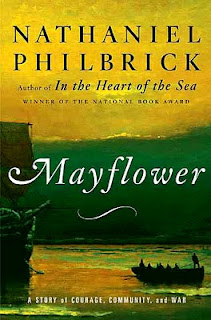 In the name of God, Amen. We whose names are underwritten, the loyal subjects of our dread Sovereign Lord King James, by the Grace of God of Great Britain, France and Ireland, King, Defender of the Faith, etc.

Having undertaken, for the Glory of God and advancement of the Christian Faith and Honour of our King and Country, a Voyage to plant the First Colony in the Northern Parts of Virginia, do by these presents solemnly and mutually in the presence of God and one of another, Covenant and Combine ourselves together into a Civil Body Politic, for our better ordering and preservation and furtherance of the ends aforesaid; and by virtue hereof to enact, constitute and frame such just and equal Laws, Ordinances, Acts, Constitutions and Offices, from time to time, as shall be thought most meet and convenient for the general good of the Colony, unto which we promise all due submission and obedience. In witness whereof we have hereunder subscribed our names at Cape Cod, the 11th of November, in the year of the reign of our Sovereign Lord King James, of England, France and Ireland the eighteenth, and of Scotland the fifty-fourth.

-- Text of The Mayflower Compact

My posting lately has been severely restricted due to work, but hopefully I’ll get caught up on a few of the books I’ve read. I’ll start with Nathaniel Philbrick’s engaging Mayflower. In addition to covering the Pilgrims’ history in England and Holland as well as the establishment of Plymouth Colony, Philbrick spends the latter portion of the book covering King Philip’s War (or Metacom’s War) in 1675-1676. Philbrick’s greatest appeal lies in presenting facts from all sides of an event before drawing any conclusions. Thus while puncturing much of the mythology surrounding the Pilgrims, a complex image emerges that may diminish the legend but still provides insights on actions that were taken.

The comparative peace that existed between the Pilgrims and the Indians during the first years stands in sharp contrast to the tension that arose as more settlers arrived. One of the Pilgrims’ traits I found interesting was how easily they were taken advantage of or duped, assuming other people would behave as forthright as they did. Merchant seamen swindled them when contracted to provide transportation. Investors failed to send supplies in a manner that would provide assistance. Indians used the Pilgrims to eliminate their enemies (Massasoit even lied when he thought he was on his deathbed in order to have another tribe attacked). Bad luck and stubbornness did not help their cause, such as choosing one of the least fertile locations in the area to plant their colony.

Philbrick’s telling of King Philip’s War, one of the deadliest wars (proportionately) in American history, provides a sad historical chapter. The war may have been possibly inevitable given the nature of the participants. Succeeding generations of the Pilgrims and additional settlers were much less considerate of the Indians’ rights and claims. But Massasoit’s belligerent son Philip was a master at inciting violence while at the same time acting surprised that his actions provoked others to battle. Momentum eventually swung against the Indians as support from other tribes was denied (most notably from the Mohawks) as wellas settlers accepting Indian help and adopting Indian tactics. The war provided several poignant lapses in the Pilgrim legend, conspicuously the massacre at the Great Swamp Fort (a blunder in both tactics and strategy), the internment of “Praying Indians” on Deer Island, and the shipment of conquered Indians as slaves.

After reading Mayflower I found it easy to come to the same conclusion as historian Samuel Eliot Morison: “The ways of the puritans are not my ways, and their faith is not my faith; nevertheless they appear to me a courageous, humane, brave, and significant people.” Neither vilifying the participants using present-day standards nor whitewashing their actions, Philbrick has provided an account of the Pilgrims that was a pleasure to read. At the least (or would it be at most?), it inspired me to read several of the source documents by early Americans.

this era is very interesting to me. It sounds like this was a rewarding read about it. I am not familiar enough to comment other than I'd love to read it to learn more! Thanks for sharing your thoughts.

I think this book is a very good starting point if you're interested in that era. My only real complaint is that after providing a lot of detail on the first few years, the next few decades are glided over pretty quickly to get to King Philips' War. I wish there had been a little more on the intervening years.

I'm finishing a few of the original books that Philbrick mentions in his notes and hope to post on them soon. I need to scout around and see if there is an equally good book on the founding of the Virginia area.