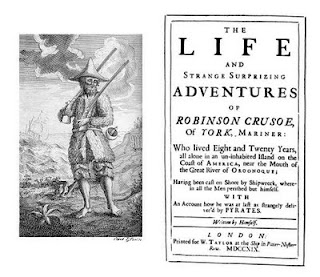 A story can be so firmly cemented as a cultural touchstone that you think you know it without having ever read it. Part of my interest in Daniel Defoe’s Robinson Crusoe comes from wanting to see what is consistent and what is different from my expectations. I was planning on reading some early English novels next year, but I’m moving this one ahead of the pack just for the fun of it.

Information on Defoe at Wikipedia

Defoe’s page at luminarium.org, which includes links to essays, resources and books about the author

The biography Daniel Defoe by William Minto (1900) at Google Books

The chapter “Defoe—The Newspaper and the Novel” from The Cambridge History of English and American Literature, available at bartleby.com

The Digital Defoe, which includes (among other links) On Teaching Another Defoe (viz. helping students learn“the most about Defoe as an author and about the age in which he lived”)

The title page from the 1719 first edition (pictured above):
The Life and Strange Surprizing Adventures of Robinson Crusoe, of York, Meriner: Who lived Eight and Twenty Years, all alone in an un-inhabited Island on the Cost of America, near the Mouth of the Great River of Oroonque; Having been cast on Shore by Shipwreck, where-in all the Men perished but himself. With An Account how he was at last as strangely deliver’d by Pyrates.
Written by Himself

At Project Gutenberg
Online .pdf version at Planet PDF (which can be downloaded)
An online version of the first edition at Pierre Marteau’s site
Free audio version of the book at LibriVox.com

An informative site which includes biography, background and links on Defoe and Robinson Crusoe. It appears to be part of an Eighteenth Century English Novel Course at Brooklyn College by Lilia Milani. Also of interest is detail on some of the possible sources and inspirations for the novel.

Picturing the First Castaway: The Illustration of Robinson Crusoe has many illustrations from various versions of the book. The site covers from the first English edition through the early 20th century.

There have been a couple of classics I felt that way about only to finally read them and find out I was *totally* wrong. :-) Enjoy your adventure!

Thanks for stopping by and posting your nice comment.