The Aftermath of Battle: The Burial of the Civil War Dead by Meg Groeling (Emerging Civil War Series) 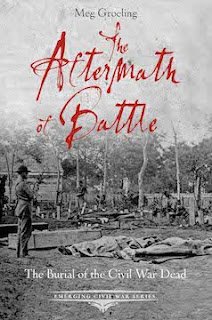 “After the battle, what did they do with all the bodies?”
— common question from U.S. Civil War battlefield visitors

I recently stumbled across the Emerging Civil War Series, which provides "fresh perspective on America's defining event." To date, the series contains overviews and details on some of the battles as well as issues surrounding the war. One such issue has to do with what to do with all the casualties of a battle. When visiting a Civil War park, the opening question repeatedly gets asked once the magnitude of the carnage sinks in. Meg Groeling address this question and many more related to it in The Aftermath of Battle: The Burial of the Civil War Dead.

The protocol of the time was the winner of a battle would take care of burying the dead since they held the ground. This meant their own fallen were usually taken of first and best, while the other side got whatever resources were left over. However, many situations proved difficult for even this simple procedure. The elements could make burials problematic. Oftentimes, both sides were immediately on the move after a battle, leaving little time to take care of the dead. In this case, locals were usually left with the challenge of burials. And too often the sheer numbers of dead men and animals was simply overwhelming.

Groeling's narrative begins with addressing what was done with the dead, but the book covers many more topics, such as:

If that seems like a lot squeezed into the book, it is. Groeling goes into great detail in some areas, but others are necessarily higher level summaries. Fortunately there is an excellent "Suggested Readings" section at the end that covers any area raised in the book for a curious reader. As the back jacket notes, The Aftermath of Battle is an "easy-to-read overview that will complement any Civil War library...." The book also provides plenty of information about many Civil War parks, battlefields, and cemeteries as well as museums and other related sites that would be of interest.

For a morbid topic, Groeling's writing handles the subject matter with grace and taste. The suffering during and after the battles are presented, but it's the portraits of compassion by people wanting to help those in agony or wanting to honor those who fell that resonated the most with me. More information on the Emerging Civil War Series can be found here. The publisher, Savas Beatie, has done a good job with the books I've looked at in the series. There were a few typos in Aftermath (most notably mislabeling casualties as deaths in one place), but overall the layout, the content, and the flow of information was well done. I'm not a fan of the font used for chapter headings (the same as on the book cover), but that's a minor quibble. Highly recommended.

In a separate post, I'll have an interview with Meg Groeling.
Update: the interview is in this post.