Lunatics, Lovers and Poets: Twelve Stories after Cervantes and Shakespeare 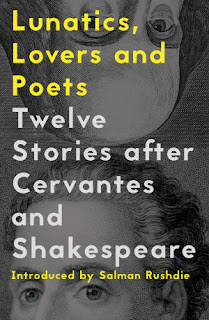 For this anthology, publisher And Other Books commissioned six Spanish-speaking writers to write stories inspired by Shakespeare and six English-speaking writers to do the same for Cervantes. The impetus behind the project being, of course, the 400th anniversary of the death of each writer on the "same day" (or a day apart), although with England was using the Julian calendar and Spain the Gregorian system, which meant they died approximately ten days apart. Regardless, it's close enough to support such a project.

I've commented before that most fiction I read can easily tie back to Cervantes, and that's not just true of the Cervantes-based stories in this collection but the Shakespeare-based stories, too. And I guess you could say several of the Cervantes-based stories show touches of Shakespeare as well. All of which reflects the importance of the two on current authors. One thing that comes across in each story is the universal nature of Cervantes and Shakespeare. Stories are based from the modern day back to the early 17th century, in locations all around the world, and all of them seem fresh and current. It's a fine collection highlighting the pervasiveness of each author.

The opening story by Ben Okri, "Don Quixote and the Ambiguity of Reading," perfectly sets the tone for the collection. The knight shows up at a printing shop and reads about his adventures as written by a Ben Okri from oral histories as well as from "manuscripts originally written by Cervantes, who wrote his from papers he discovered by Cide Hamete Benegeli, who got it from an Arabic manuscript." The matryoshka doll-like nesting of narration calls up Part I of Don Quixote while visiting the printing shop borrows from Part II. But this Don Quixote tries to teach Ben Okri how to read, which is, in large part, what Don Quixote is all about. This crazed version of the knight notes," Reading is about understanding that which cannot be understood, which the words merely hint at." The fact that the pages he read contained nothing like what he said he read makes the narrator wonder, "There still remains some doubt as to whether his reading of this secret reality is a consequence of his madness, or whether our inability to read it is a consequence of our dimness." I feel his pain.

There are other Cervantes-based stories from Don Quixote and his Exemplary Novels. Rhidian Brook's "The Anthology Massacre" tells of the narrator's completion of a novel told from Rocinante's point of view, obliquely references the collection of stories we're reading, and has a bodycount that would make Shakespeare envious. Kamila Shamsie creates the storyteller Mir Aslam, who seems to share characteristics of both Don Quixote and Cide Hamete Benegeli. Nell Leyshon and Deborah Levy start with "The Glass Graduate" from the Exmplary Novels, but take the premise in different directions, each of which touch on the psychosis of the original.

There is a similar range in the stories based on Shakespeare. Marcos Giralt Torrente's "Opening Windows" borrows heavily from Hamlet, especially the play-within-a-play device. Vicente Molina Foix's "Egyptian Puppet," set in Shakespeare's London, tells of a couple going to the Globe Theater to watch Antony and Cleopatra. The next morning the husband, a jailer, leaves for work but is never seen again. His wife moves on with her life, yearning for the man who once was while suffused in melancholy (very A&C-like). In the link above to "The Dogs of War," Juan Gabriel Vásquez gives us real life characters stepping directly from Julius Caesar into 1984 Bogotá, Colombia, filling their roles a little too convincingly.

Valeria Luisella's "Shakespeare, New Mexico" took a while to grow on me, but it gradually became my favorite Shakespeare-based story. A ghost town off the beaten path has become a tourist attraction with actors re-enacting historical characters and events. The catch is that the actors are permanently in character, even when there are no tourists present. The narrator plots to commit adultery with Billy the Kid while one character opts for a Mickey Mouse costume instead of historical dress. That's when things turn weird. Each actor tends to strut and fret upon their own stage of life.


Lunatics, Lovers and Poets proves to be a fine collection that commemorates Cervantes and Shakespeare and their continuing influence, not just on these writers but on all of us. Recommended.

The lunatic, the lover, and the poet,
are of imagination all compact.

Interesting concept. I'm surprised that Javier Marias isn't included in this collection, but then again, he writes about Shakespeare in pretty much all of his works.

They don't say anything on how the authors were chosen, only "twelve contemporary international authors." There are a few I would have loved to seen, too, but after finishing I was happy with their choices.

I guess I should have noted...I remember reading a review that placed Ben Okri's story (about Don Quixote walking into the print shop) in Spain, but it definitely sounded like Nigeria. I love that concept.

More on Cervantes tomorrow, this time from a 1950s perspective.