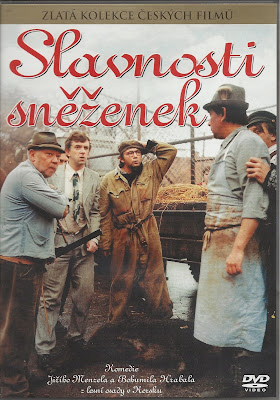 In my post on Rambling on: An Apprentice's Guide to the Gift of the Gab by Bohumil Hrabal I mentioned that Jiří Menzel had directed a movie based on those stories set in the Kresko settlement of Bohemia. I finally watched a copy of the movie with English subtitles and I found it almost as much of a joy as the stories on which they were based. This is the third Menzel movie I've watched based on Hrabal's stories and I'm convinced they were a match made in celluloid heaven. Menzel captures the playfulness, ambiguity, and the subversiveness of Hrabal's writing.

Menzel includes many of the quirky people and situations populating Rambling on, capturing their traits and peculiarities making them memorable. For example, watching the farmer take his goats for a ride in his car provides the same smile, inside and out, as the reading provided. Menzel downplays the subversion in Hrabal's stories, probably a factor of filming in Czechoslovakia in the early 1980s. Hrabal's chief of police dispenses arbitrary justice favoring his friends (and himself) while meddling in everyday affairs. While Menzel's characters distrust the police chief, he provides a calming effect on the populace, especially at a rowdy dinner party.

Even though the movie provides many laughs and smiles, a sadness permeates the bucolic setting. Like the stories, alcohol provides a social lubricant as well as an escape. Just what people are trying to escape isn't quite clear, amplifying Hrabal's ambiguous messages, although you wouldn't be far off the mark if you simply answered "their lives." While some things give these characters joy, many things drive their desire to escape, including family, work, government, opportunity, and materialism.

Similar to Hrabal's style, Menzel allows the quirkiness and banality of the residents to supply both beauty and humor. It's a dark humor, though, but one that celebrates the uniqueness of each character, breaking your heart while making you laugh. The central story for the movie is "The Feast," where competing hunting clubs argue over the right to feast on a wild boar shot in a local schoolroom. When you watch Menzel's version you'll agree with Hrabal's repeated admonition in the story that "you've never seen, nor could you have seen, the things I saw, we saw, the things that came to pass that time when a boar, a wild boar, got shot by us folk from Velenka inside the school at Přerov." Menzel combines "The Feast" with another story that marks a bittersweet turn to the drunken fight/feast.

I don't know where the movie was filmed but I seem to recall reading somewhere that the opening montage of local scenery was shot in and around Kresko (don't quote me on that, though), where Hrabal had a cottage he used when he wanted a break from Prague. Hrabal has a cameo in the movie, sitting on the porch of a pub with another patron, a pint of beer in front of him. I raised a glass to him while I was watching it and to the movie in general. Despite not displaying the full complexity of Hrabal's stories, Menzel does a wonderful job of adapting them to the screen. Very highly recommended.

Email ThisBlogThis!Share to TwitterShare to FacebookShare to Pinterest
Labels: Bohumil Hrabal, Jiri Menzel, Jiří Menzel, Movies, Rambling on: An Apprentice's Guide to the Gift of the Gab

Thanks for the post, Dwight. I've been in a movie rut of late, but this sounds like it might help break me out of it if I can get a hold of it. "Their lives" = funny (and sad)!

Sounds great. I'll see if I can track it down. Thanks Dwight.