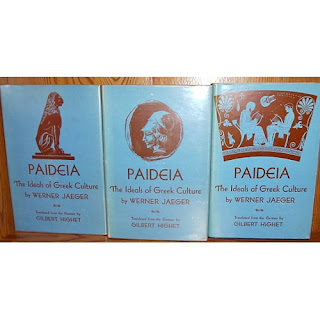 I had planned on posting on Werner Jaeger's monumental work Paideia: the Ideals of Greek Culture last year and didn't get very far before other things came up. I intend to correct that this year, so I'll begin with the initial posts I did publish and will go from there. Postings on the book will be sporadic, like everything else on this blog. The copy I am reading and quoting from is the fourth printing of the 2nd edition, published in 1962.

So what is paideia (the concept)? Before we get to the prefaces Jaeger provides a helpful explanation, both of the word and why he uses it:


Paideia, the title of this work, is not merely a symbolic name, but the only exact designation of the actual historical subject presented in it. Indeed it is a difficult thing to define; like other broad comprehensive concepts (philosophy, for instance, or culture) it refuses to be confined within an abstract formula. Its full content and meaning become clear to us only when we read its history and follow its attempts to realize itself. By using a Greek word for a Greek thing, I intend to imply that it is seen with the eyes, not of modern men, but of the Greeks. It is impossible to avoid bringing in modern expressions like civilization, culture, tradition, literature, or education. But none of them really covers what the Greeks meant by paideia. Each of them is confined to one aspect of it: they cannot take in the same field as the Greek concept unless we employ them all together. Yet the very essence of scholarship and scholarly activity is based on the original unity of all these aspects—the unity which is expressed in the Greek word, not the diversity emphasized and completed by modern developments. The ancients were persuaded that education and culture are not a formal art or an abstract theory, distinct from the objective historical structure of a nation’s spiritual life. They held them to be embodied in literature, which is the real expression of all higher culture. (v)

So why write about or study paideia? Jaeger presents several reasons in his Preface.
I’m providing the table of contents from Volume One below so you can see what’s included. I’m including a section at the end of this post for links to Jaeger’s work, which will hopefully grow as my reading continues. As usual, if you have any comments, tips, experience, etc. please feel free to comment!


Contents:
Introduction: The Place of the Greeks in the History of Education

BOOK ONE: Archaic Greece
1. Nobility and Areté
2. The Culture and Education of the Homeric Nobility
3. Homer the Educator
4. Hesiod: the Peasant’s Life
5. State-Education in Sparta:
A new cultural pattern: the polis and its types
Historical tradition and the philosophical idealisation of Sparta
Tyrtaeus’ call to arête
6. The City-State and Its Ideal of Justice
7. Ionian and Aeolian Poetry: the Individual Shapes his own Personality
8. Solon: Creator of Athenian Political Culture
9. Philosophical Speculation: the Discovery of the World-Order
10. The Aristocracy: Conflict and Transformation:
The transmission of Theognis’ poems
The codification of the aristocratic educational tradition
Pindar, the voice of aristocracy
11. The Cultural Policy of the Tyrants

BOOK TWO: The Mind of Athens
1. The Drama of Aeschylus
2. Sophocles and the Tragic Character
3. The Sophists:
Their position in the history of culture
The origins of education theory and the ideal of culture
Education and the political crisis
4. Euripides and his Age
5. The Comic Poetry of Aristophanes
6. Thucydides: Political Philosopher

Links on Paideia (the book) and paideia (the concept):
Old Ideals for a New World?, a review of Paideia by Borit Karlsson at H-Net Reviews. Karlsson looks at criticisms and ongoing subjects of discussion criticisms of the work and some of the ongoing subjects of discussion. A note on what was lost in the English translation, in particular Jaeger's use of an older style German that "carries within itself the ideals and imaginations--'Bildung'--of nineteenth-century views on knowledge and education as a means to mans growth as a moral and ethical being."

A Microsoft handouts presentation on "Paideia": An Introduction to Ancient Greek Cultural & Educational Concepts by G.D.Albear, M.A., at Eastern Illinois University. Looks to be an extremely helpful overview.

A tribute to Jaeger and Paideia by Clara Claiborne Park. A Reconsideration: Werner Jaeger's Paideia

Dallas Baptist University has quite a bit on the concept of Paideia, with a focus on the tie-in between the Greek concept and the rise of Christianity (a topic Jaeger also wrote about in a work I also hope to cover). There are more posts by them, easy to find browsing through the DBU Paideia College Society.

The Wikipedia entry on paideia 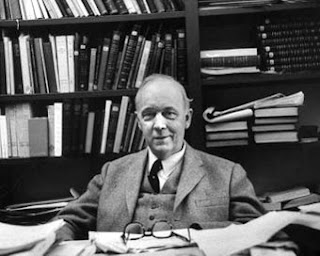 Werner Jaeger
Picture source
Posted by Dwight at 9:47 AM

I got interested in this set when you posted before, and it turns out we have it at the library I work at (!). I have the first volume at home, and am eyeing it with great trepidation. I don't know if I should try to tackle it this summer or what.

It's not easy reading, but is so full of information. Feel free to tag along on the posts before tackling it yourself! Hopefully I'll give you a good idea of what's in it.