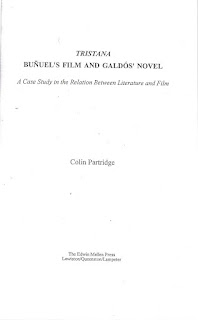 Tristana: Buñuel’s Film and Galdós’ Novel: A Case Study in the Relation Between Literature and Film by Colin Partridge (New York: The Edwin Mellen Press, 1995)

Colin Partridge has provided a valuable service for anyone interested in an English translation of Galdós’ novel. Tristana is a wonderful book full of Galdosian ambiguity and irony. Its original reception, though was underwhelming. From Partridge’s essay on the novel:

Tristana reflects therefore reflects a moral and social dilemma: the novel points in one direction to explorative personal ambitions and in another to the traditional attitudes and behaviors structuring Spanish society. Its ambivalences probably contributed to its neglect. The author himself appeared to dismiss the work; and there is evidence from the manuscript that his creative imagination was being drawn away from the text in the latter stages of its composition towards the dramatization of Realidad [an earlier Galdós novel that he was adapting for the stage]; he used the manuscript of Tristana to make notes for Realidad which was to be staged in Madrid in March 1892, less than two months after the publication of Tristana. However, the novel gained a level of popular appeal in the deades following Galdós’ death in 1920, but attracted little critical attention.

The novel follows the trials and tribulations of the youthful, orphaned Tristana and the two lovers in her life. The first lover is her guardian, Don Lepe, an aging Don Juan who couldn’t resist one last conquest. The second lover is Horacio, a painter with a similar background as Tristana. The ever-changing dynamics provide the ambiguities and ironies that take it well beyond a simple statement on feminism in the late 1800s Spain. As Partridge describes it (and I’m only slightly paraphrasing him), the novel is a somber comedy, an oral narration offering a wry commentary on human efforts to establish humane relationships, and a problem play questioning gender-based social values.

Something that struck me as I read the novel, and Partridge notes as well, is that each of these three characters is a rebel, or at least claims to be, of one sort or another. Don Lope holds himself outside of social institutions, whether of man or God, although he changes his attitude in old age and poverty. Tristana asserts her right to education despite her inability to focus on any one art for an extended period. She tires of these explorations after the amputation of her leg and, similar to Don Lope, the promise of security. Horacio’s bohemian lifestyle falls by the wayside as he discovers the pleasures of a rustic lifestyle and realizes his desire for marriage (and, presumed, fatherhood). Everyone falls in line with the existing power structure, but Tristana is the only one that doesn’t have an option without sinking into further dissipation. Her choices are restricted, although one of the ‘acceptable’ options—actress—she expresses an interest in and demonstrates an aptitude for, then abandons.

The initial evaluations of Tristana as highlighted in this post reflect the struggles by and disappointments in Galdós. He had been working for social improvements through his writings but little or nothing was being done. He wrote a disturbing tale that ends in disappointment for the reader even though the characters seem happy, making the novel more effective. Highly recommended. The book benefits from the two essays by Partridge, one on the novel, one on Buñuel's movie.

Posts on the novel:
Far from the desired feminist manifesto
Don Lepe
Tristana
Horacio
A Fortunata and Jacinta quote that fits in nicely with Tristana

Notes on the 1970 movie directed by Luis Buñuel