Off the Beaten Track in the Classics by Carl Kaeppel: Gaius Iulius Solinus

Kaeppel begins his book with an essay on "Gais Iulius Solinus, a Teller of Wonder-Tales". Solinus’ work, the Collectanea Rerum Memorabilium (Gallery of Wonderful Things), was written somewhere between 230 and 280 A.D. by Kaeppel's reckoning. Different editions of it can be found at The Latin Library, the 1895 Mommsen second edition being the one I’ve seen receiving the highest recommendations. The only English translation Kaeppel knew about was by Arthur Golding, “a quaint and charming work, though more a paraphrase than a translation.” I wasn’t able to find any additional translation, but if you know of one please let me know. [Update: I've looked through the facsimile reproduction of Golding's translation. I recommend Kaeppel's summary for all but the serious scholars.] The quotes in this post are from Kaeppel’s essay, while quotes from Golding’s translation, within Kaeppel's quotes, are indicated by single quotemarks. Also, remember that Kaeppel wrote these essays in the 1930s so terminology and scholarship may have changed in the intervening period.

So what does Collectanea Rerum Memorabilium cover?

Solinus is not an original writer. His object is simply to collect marvelous tales of monstrous races, strange animals, wonders by land and sea, from all available sources. Chief among these is Pliny, whom he uses constantly, though Pliny is never mentioned by name. Next come Varro and Pomponius Mela. In all, he mentions about sixty authors, about some of whom, e.g., King Juba and the Punic Books, nothing is known, while many of his marvels are from entirely unknown sources.

Kaeppel provides an outline of the contents of the work. The book proceeds geographically, starting with Italy then covering Greece, Black Sea lands/Russia, northwest Europe, Africa, and Asia. Since readers of Solinus’ time would have already been very familiar with Italy and Greece their sections are somewhat subdued, although Kaeppel says “he makes what he can of it” by providing tidbits of interesting tales. Starting with the Black Sea lands Solinus' stories begin to take flight, relaying tales about Gryphons, the land of feathers, and interesting tribes of men, such as the “loupgaroux—men who, at certain times, turn into wolves and regain their proper shape after a holiday among the beasts.” The marvels of Northwest Europe, including Britain, are no less fascinating but Africa is where the enchantment really takes off and doesn’t slow down whilecovering Asia (including China and India).

So why does Kaeppel include an essay on Solinus? Not just because some of the tales reappear again and again in ancient works and are used in more modern contexts (he provides two examples that are in novels by the Welsh author Arthur Machen), although that is of interest but because of what the historical inclusions/references represent. Kaeppel argues that Solinus’ work was

perhaps the most completely miraculous view of the world ever put forward. Much has been said about his sources, but it must be remembered that Solinus is different, not in degree, but in kind, from the classical authors he uses. Pliny’s Natural History, e.g., to which he is chiefly indebted, certainly does contain a great deal of curious and mythical matter, but it is the reverse of unscientific. Solinus made it his business simply to transcribe every marvelous tale, ‘extracting the dross and leaving the gold’; and the result is a book which, with one exception, is unique. The exception is to be found in the mediaeval Bestiaries, or story-books about animals. Read as Mr. Machen reads it, as a fairy tale, as a work of pure imagination, the Collectanea is by no means without literary merit; in fact, it may be compared with such stories as the ‘City of Brass’ or ‘The Queen of the Serpents’ in the Arabian Nights. The trouble is that it was not read in that way during the Middle Ages.

Apart from its literary qualities, the Collectanea is of great value, generally, to the historian and anthropologist, but by far its greatest importance lies in the light it throws on the workings of the early mediaeval mind. In this respect, though in this respect only, for Cosmas has no literary value whatever, it can be compared with the Christian Topography. [Kaeppel goes into detail on the monk Cosmas’ work and some of its geographical errors] … This fantastic scheme of the universe [by Cosmas], together with Solinus’ miraculous view of the world, was adopted in the Dark Ages. It needs little comment. They did not desire knowledge. Knowledge was there, ready to hand, knowledge gained by painstaking, truth-seeking enquiries. They despised it. They seemed deliverately to reject the sources of real information, the geography of Ptolemy, the description of the known world by Strabo, authentic narratives of travel like the Peripli of the ‘Red’ or Indian Sea, or of the Persian Gulf. It was nothing to them that, in the time of Hannibal, Eratosthenes had made almost exact measurements of the circumference of the earth. No greater contrast is imaginable than that between the First Book of Strabo, where he defines the scope of geographical enquiry, its relation to geology and history, and the manner in which evidence should be collected and weighed, and the miraculous view of the world put forward by Solinus. Strabo writes almost in the spirit of Darwin; Solinus like, well—Solinus. But the Dark Ages accepted the Collectanea as sober fact and rejected the geography of the classical world even as they rejected its mathematics and astronomy.

Did I mention that Kaeppel has strong opinions and rarely pulls his punches? His inclusion of Solinus was to point out “how and why mankind can lose what it has won and exchange knowledge for ignorance and superstition.” Kaeppel highlights that his study of the “Dark Ages” provides an unwelcome but profound truth: “Neither knowledge nor civilization is stable or assured; they must be kept so by those to whom they are entrusted.” An overstatement? Perhaps, but probably not by too much, and a timely message in any age. The problem wasn’t necessarily with Solinus, although he didn’t help things, but with those that accepted him (and other writers like him) as providing the truth. But how do we know this is the case?

Few writers have more profoundly or more mischievously influenced subsequent thought than Solinus. Whether he was a Christian or a pagan is uncertain, probably he was the latter; but at any rate his readers were almost all Christians, and not only were his legends accepted by the popular writers of the bestiaries and travellers’ tales such as Mandeville, but they were believed by geographers, grammarians, and the Fathers. Starting with four quotations in Saint Augustine, the number rises to some fifty in Priscian, and reaches over two hundred in Isidore, and the list could be increased indefinitely. The geographers used the topography of his most striking tales in their maps and, of these, the famous Hereford Map, as late as 1300, is perhaps the best example. His influence is most clearly shown in the general belief in monstrous races living on the edge of the known world, a belief which, perhaps more than anything else, hampered the spread, or rather the recovery, of knowledge.

I find Kaeppel’s claim against Solinus a little exaggerated, but the overall charge of preferring tales to proof during the so-called ‘Dark Ages’ (and earlier) isn’t completely off base. But then these stories have been around…well…is forever too much of an exaggeration? We’ll skip many early stories in my posts. Herodotus’ history has many such tales although he didn’t represent all of them as true. And while I’m not a historian (nor do I play one on TV, nor did I stay in a Holiday Inn Express last night), I don’t think the ‘Dark Ages’ was completely an age of “degradation and weakness of the human intellect” (as he describes it early in the essay). Although, as I've hinted at earlier, the view of the "Dark Ages" has changed quite a bit since Kaeppel's day, with evidence that supports that it wasn’t an age of complete darkness. Yet when a source gets quoted exponentially for a quite some time and even reverentially in the Middle Ages, including maps based on these fantastic tales, it’s also difficult to argue against its significance. Most importantly, Kaeppel's underlying message of the instability and fragility of civilization and knowledge hasn't changed since his, or Solinus', time. 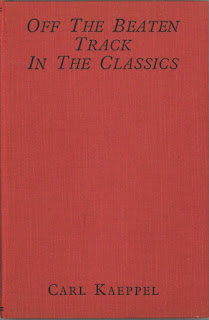 Email ThisBlogThis!Share to TwitterShare to FacebookShare to Pinterest
Labels: Carl Kaeppel, Gaius Iulius Solinus, Off the Beaten Track in the Classics

No, the underlying message hasn't changed. Thank for reminding us of this 'timely message in any age'.

My pleasure--this little book is a delight. I can only imagine what an evening with Kaeppel would have sounded like!