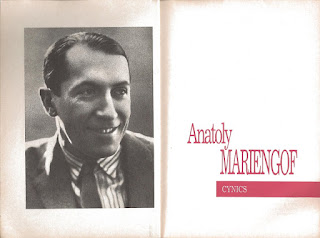 The Russian writer Anatoly Mariengof is probably more famous today for his friendship with the poet Sergei Yesenin (Esenin) but the novella Cynics proves to be a powerful work that I found both enjoyable and disturbing. Published in Berlin in 1928 by Petropolis, the book was banned in Russia and not available there until 1988. There was an English edition by Hyperion Press in 1973, now out of print, and a translation by Andrew Bromfield in the inaugural volume of GLAS: New Russian Writing (1991). This is the edition I read and will be quoting. This article at literalab goes into more detail on Mariengof and the novella—I’ll try not to cover too much of the same ground as it.

Cynics takes place in Moscow during the military communism period and the New Economic Policy. The narrator Vladimir has gathered notes he wrote during this period, making the novella feel like a diary or a series of blog posts. His entries from 1918 through 1924 cover events in his life and in the changing state and the pastiche gains strength from the comparisons and juxtapositions between the two. In some posts, Vladimir experiences the same misery he reads in the newspaper or from other sources, amplifying the distress. Other posts highlight the disparity between the ‘haves’ and ‘have nots’ during the various crises during this tumultuous period.

Vladimir’s entries convey the impact the historical events had on people, starting with the civil war, followed by famine and disease exacerbated by an inefficient and incompetent central planning. The entries trumpet the establishment of museums and artistic competitions only to be followed by notices of crop failures, typhus outbreaks, and cannibalism in the countryside. Since there are more bodies than diggers, Moscow’s dead have to be shipped out of the city in order to be buried. The government is more concerned with converting first- and second-class carriages on the trains to third-class carriages (symbolic in its own right) than keeping the city’s streets lit. Directives against lice (called “enemies of the revolution”) goes from laughable to pathetic as Vladimir and his wife delouse each other.

Vladimir continually spouts ancient Russian history that everyone ignores, although his references provide a key to what he is experiencing. For example, he looks at history to put his love/hate relationship in context:

It is impossible to understand this country: it forgives Ivan the Terrible but tears Otrepyev to pieces; it wages unsuccessful wars for seven hundred years and conquers more nations than the Roman Empire; it is unable to produce any fuses, and yet it builds the world’s most beautiful city on a swamp.

This love/hate relationship carries over to his personal life. Vladimir worships his wife Olga, which makes her constant cuckolding of him that much more intense. His aborted suicide attempt provides an example of what was going wrong at the time—the base of a seven-story apartment building is covered in the garbage tenants throw out the window, which would break the fall of his jump. Vladimir and Olga attempt to carry on in a lifestyle that no longer exists except for the rich and well-connected, first pawning or selling jewels, books, and eventually Olga’s body. Vladimir’s comments on the nepman Dokuchaev is something he and Olga figured out early during the turbulence and covers more than just making money:

A man who wishes to make money in Soviet Russia must be the person he needs to be. It depends on the person you are dealing with—a peasant shirt or a dinner jacket, a fool or an intelligent man, a scoundrel or a relatively decent individual.

Olga’s unfaithfulness isn’t indiscriminate. She chooses lovers than can provide what she (and Vladimir, at times) need and want. But she doesn’t easily fall into the caricature of a tormenting harpy—even though she negotiates her price to become Dokuchaev’s lover in front of her husband, she donates the check to the famine relief fund.

The tragedy and travesty of the couple and the country make for a powerful novella. Highly recommended. (Be sure to read the literalab article, too.)

1
“Take up your rifle, worker and poor peasant! Join the requisitioning battalions. To the village and the kulaks’ barns, for grain! The kulaks of Simbrisk, Ufa and Samara give you no bread—take it from the kulaks of Voronezh, Vyatka and Tambov…”
This is what they call “the catechism of the class-conscious proletarian.”


10
“Olga, your lover phoned a quarter of an hour ago…”
She took off her hat and began coming her hair with a large tortoise-shell comb.
“…he asked you to come at nine o’clock this evening.”


17
Typhus victims lie in the corridors of the hospitals, waiting their turn for a bed. Lice are now called enemies of the revolution.


18
Camel meat has been despatched to Moscow from the Caspian region.


19
On Sunday at two o’clock the foundation stone of the People’s Palace was laid on Karetny Ryad Street. Plans are being drawn up to build a theatre attached to the Palace. With a capacity of five thousand people it will be the second largest theatre in Europe.


23
Every day there are long lines of carts carrying coffins out beyond the gates of Moscow. These are all dead people that their relatives are taking out into the countryside to bury. There are so few gravediggers in the city cemeteries that they can’t afford to wait their turn.


29
The Council of People’s Commissars has decreed the withdrawal from passenger trains of first class and second class carriages, with measures to be taken immediately to convert them to third class carriages.


31
From tomorrow the gas-lamps in the city’s streets will not be lit.


35
All movement of passenger trains has been halted.