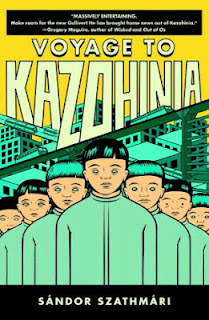 How to review a novel I greatly admired but didn’t necessarily click with? Instead of avoiding any write-up, as I did with Job by Joseph Roth, I’ll attempt to lay out both why I admired it and my problems with it. Published in Hungarian in 1941, Voyage to Kazohinia at first glance to be a (then) modern-day Gulliver’s Travels. The story begins with Gulliver, a British ship’s surgeon, volunteering to be transferred to the ship Invincible during the 1935 tensions between Britain and Italy over the Italian invasion of Ethiopia). While headed to Shanghai to protect British interests (including culture and civilization as well as trade), the Invincible is attacked and sunk somewhere in the Indian Ocean. Gulliver survives and washes up on the island of Kazonhinia.

Gulliver first encounters what looks to be the utopia of the Hins on Kaonhinia. Everything among the Hins is perfectly ordered. They teach Gulliver the language and the guiding concept of their society: kazo.

Kazo is pure reason that perceives with mathematical clarity, in a straight line, when and how it must act—so that the individual, through society, reaches the greatest possible well-being and comfort.

That is, to be Kazo is to organize work, rest, sleep, sport, food, and our attitude toward our fellow human beings so we can produce the maximum possible, but without damaging our health through unnecessary strain. … We must not forget, kazo is not individualistic but communal in sense: what is not kazo for someone else is not kazo for me, either. … [M]ost remarkable, as we shall see later, kazo has no emotional resonance. (pages 44-45)

The lack of “emotional resonance” is important—the Hins have no emotions. The basis for everything is objectivity, subjectivity does not exist. As Gulliver intuits early on, “behind this terrible perfection there was no substance.” (page 32) Everything is provided for in the Hins world. Food is available when you want and however much you want. You can work wherever you want, as long as it is kazo. Whoever needs something the most, such as shelter or clothing, determines who gets it. Many concepts we desire or enjoy—love, family, music, art, beauty—and societal tools—money, government, private property, stealing, character—don’t exist among the Hins. It’s an example of a perfect society, but it comes at the cost of its humanity. Or as Gulliver puts it later, “Life here does not take place, it only is.” (page 115)

Here are a few of the substantive points on Hin society and Gulliver’s interaction with it that I found interesting:
Gulliver admires their technological advances but the absence of purpose and loss of interpersonal relationships, especially with a woman he likes (she only cares about sex and relationships from a physical standpoint), causes him to request moving to where the other society, the Behins, are sequestered. There Gulliver finds the extreme opposite of the Hins. The Behins ignore physical realities. They fight over symbols (and their desecration) and imaginary ideas. The funniest contrast to the Hins has to do with food and sex. The convoluted Behin reasoning leads to food prostitutes—women that charge money to let men see them eat. Gulliver has gone from a land where contradictions don't exist to a land where everything is a contradiction. Szathmári has constructed the novel so that satire oozes from the page during the Behin section. A few (and only a few) examples:
The inevitable question arises of where we lie on the continuum between the hyper-rationality of the Hins and the irrationality of the Behins, especially in comparison to Szathmári’s time. I’m not sure I like the answer.

As for things that didn’t click for me about the novel, the most basic resides in not being a huge fan of utopian or dystopian literature. I know the “it’s not you, it’s me” defense is a poor excuse. Even with that hurdle to overcome, I found the novel engaging and many issues still relevant today. My main problem in the story occurs near the end when the Hins explain the Behins behavior as a genetic mutation. I found that jarring, mostly because it shows that the Hins do have a sense of history and the past isn’t imaginary to them. Granted it’s a concept they see as based on concrete evidence (or so I assume), but it still raises some inner contradictions.

After his rescue, Gulliver blithely carries on in his pre-wreck behavior, having learned nothing, a more active participant in the “dialogue of the deaf” than he realized. As Gulliver’s guide among the Hins points out, you never recognize that we don’t really see ourselves, individually or collectively, from within. We have to travel outside ourselves in order to understand. Fortunately Szathmári gives the reader plenty to contemplate in order to avoid Gulliver’s fate.

Wikipedia page for the novel

Videos from the book launch held in New York City, at the Consulate General of Hungary, on June 6, 2012:
Update: Ralph Dumain (from the YouTube clip above) has several items of interest regarding the novel and Szathmári. At his website The Autodidact Project he has compiled a massive bibliography and web guide on Sándor Szathmári (in Esperanto and English). He also has a lengthy podcast on " the fiction and ideas of Sándor Szathmári", which I plan on listening to this weekend (and may update this post after doing so).