The Desert of the Tartars: 1976 movie, Italy

I continue with my erratic foreign movie posts for this year as well as posting on movies adapted from books (as usual, this post will look at the differences between the film adaptation and the novel). For more foreign movies, check out Caroline's World Cinema Series 2012 and Richard's monthly Foreign Film Festival round-up (first half of year and second half). 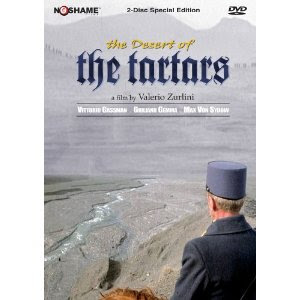 Add this movie to the excellent adaptations from movies I have seen this year. As you can tell from the cast list at the movie’s IMDb.com page it’s a pan-European production. Jacques Perrin not only plays Giovanni Drogo but was one of the principal producers, too. Included on the disc is an interview with Luciano Tovoli, the movie’s director of photography, and he states “It was Perrin who convinced Zurlini to make the film.” I’m glad he did.

The storyline, as I quoted from The Tartar Steppe's introduction in my post on the novel:

The Tartar Steppe is the story of a young officer [Giovanni Drogo] dispatched to do service in a remote mountain garrison overlooking a vast northern desert. At first desperate to escape and return to the pleasures of normal life, he nevertheless falls under the spell of the place to the point that he will spend the next thirty years there, sustained only by the vain hope that one day an enemy attack will offer a moment of glory and fulfillment. 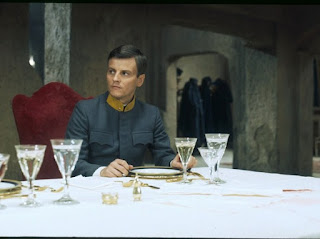 I should have mentioned in that post that the story is much more complicated than that, but for an overall summary it will do. The movie begins, as the novel does, with Drogo’s assignment to the mountain fort, his best friend from the city accompanying part of the way. His meeting with Captain Ortiz on the road to the fort provides the source for one of the major additions to the movie—a remarkably enhanced setting. Ortiz tells Drogo the history of the fort (although one of the running motifs is that no one can tell anymore what is history and what is legend) and talks of the ancient city next to the fort, destroyed long ago by the Tartars. The outer shots of the movie were filmed at Arg-é Bam in Iran (mostly destroyed by an earthquake in 2003), the “ancient city,” adding to the mystique and spell of the setting.

The movie highlights the fort’s adherence to military rules, emphasizing the blurred line between vigilance and paranoia. The shooting of a soldier, ignorant of the day’s password but who could be clearly identified from the fort’s gate, provides another nice addition to the film—a protest by the dead soldier’s platoon. Major Mattis, menacingly played by Giuliano Gemma, sadistically punishes the members of the platoon for their intransigence. Mattis becomes the human face of overly strict adherence to an ideal. There are many other additions and changes, most of them successful (such as the shot of the soldiers’ graveyard with upturned rifles) although some are not. The Colonel’s attacks and sedation for some unspecified pain, for example, may be meant as commentary about the one man that has seen battle, but it isn’t made clear. 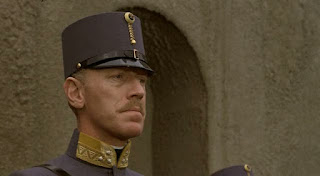 Because the setting of the novel is a remote outpost, the ability to visualize the desert on the screen adds to the feeling of isolation. Even with this added element, the film misses some opportunities to highlight some of the related themes of the novel, such as Drogo’s visit home and his isolation from his friends’ ordinary lives. It seems that the expansion of Captain Ortiz’s role (played by Max von Sydow) and his inability to accept life away from the fort fills in some of the gaps on these themes. The theme surrounding the willful blindness of some officers once a possible threat appears remains intact, producing the same frustration in the viewer as it did with the reader.

Despite these criticisms (which clearly come from reading the novel first, then watching the movie), I liked the film quite a bit and feel it did a good job on capturing much of what is moving about the novel. The extra challenge for the movie revolves around portraying a story focused on the soldiers’ internal lives as they search for their purpose in the world. The movie was very well cast, down to the minor roles. I definitely recommend it whether you’ve read the novel or not. 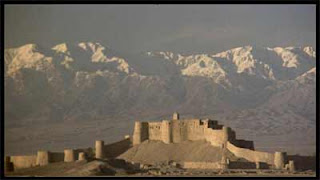 How can you watch the movie and say nothing of Ennio Morricone's score? It's one of his finest compositions:

It's the sound of sadness, melancholy.

Although Drogo's trip back to the city isn't shown, nor his inability to adapt to civilian life, I'm pleased with the expansion of Ortiz' character. Max Von Sydow played him very well - I burst into tears when they shook hands in the end, and then Ortiz does what he does, which is not in the novel but sounds to me like a logical result of his leaving the fort that had become his only life.

The movie is for me one of the best adaptations of a novel.

Point well taken on Morricone's score. In my defense I did have a paragraph with a link to the Italian trailer on YouTube for the film and mentioned you would get a chance to hear some of the score. Since the trailer didn't have subtitles I decided to delete the link and deleted the entire paragraph. Oh well, just another reminder that "preview" is your friend.

I agree that is a great adaptation. Max Von Sydow is wonderful is it...shoot, they all are. I hope I made clear that the changes they made worked very well.