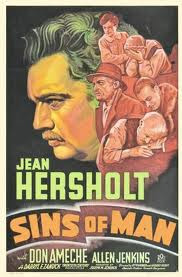 Freely adapted from "Job," the novel by Joseph Roth, "Sins of Man" is a thoroughly sentimental, painstakingly somber and devastatingly complete portrait of a man in sorrow. While it is uncompromisingly tearful, it happens also to have been splendidly performed, honestly directed and handsomely produced. In sum, a well-planned conspiracy against the lachrymal duct which has been so perfectly organized that it is impervious to any resentful cry of "You harrow me!"

Our preference, frankly, is for a more "contrasty" negative. "Sins of Man" has blocked in its tragic shadows solidly, courageously ignoring any romantic sub-plot and only in a few penultimate episodes seeking to bring its heavy theme into clearer relief through recourse to a "funny man." Although this is a more mature approach to tragedy than the screen generally employs, and must be encouraged in principle if not in this specific instance, still there is danger in overdoing it.

Your Hollywood-style Job is said to be, well, exquisite. They’ve turned Mendel Singer into a Tyrolean peasant. Menuchim yodels. I simply have to see it. I will roll in the aisles on your behalf.


Sins of Man, "freely adapted" from Joseph Roth's book Job, wasn't the easiest movie for me to get a copy to watch. I lean (strongly) toward Zweig's response. The best thing I can say about it is the movie demonstrates how horribly wrong Roth’s Job could have gone and makes me appreciate the book more than my initial lukewarm liking of it.