The Doll by Bolesław Prus: "to present our Polish idealists against the background of society’s decay" 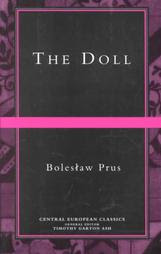 I have been reading the Central European University Press version of Bolesław Prus' The Doll (Hungary, 1996 paperback edition pictured above) and thoroughly enjoying it. The translation is by David Welsh with an introduction by Stanisław Barańczak. What looks to be the same translation is now available from the New York Review Books. I'm going to spend several posts on this book, with plenty of excerpts, and hopefully you can get an adequate flavor of the book. Prus can be a little heavy handed at time, explicitly repeating central points a few too many times, which ends up being the only thing keeping me from giving this book my highest recommendation. (Maybe that's partially a product of its serialization?) Even so, as I hope my posts will show, Prus' novel is well worth reading.

Bolesław Prus (real name Aleksander Głowacki) proves to be an interesting character. His participation in Poland's 1863 uprising against Russia may have provided the source for one of the greatest battle scenes in literature I've read (in Chapter X). The novel follows the fortunes of Stanisław Wokulski, a parvanu to upper-crust Warsaw in the late 1870s and his love for Izabela Łęcki, a lovely but shallow young woman from an aristocratic (but financially challenged) family. Unfortunately Izabela may be the weakest character in the novel, more a caricature than a real person. Even with that limitation, she ends up being a compelling character at times, such as when Prus introduces her (as I hope to show in the next post).

The New York Review Books' page for the book includes a link to the introduction by Stanisław Barańczak. Barańczak includes this insight from Prus about the novel: “In the most revealing of his self-commentaries written after The Doll, an extensive letter to the editor published in 1897 in Kurier Warszawski, Prus succinctly defined his intention as the desire ‘to present our Polish idealists against the background of society’s decay.’” I'm sure I will be quoting from this introduction now and then but I want to include this excerpt, starting on page xiii, in this post to give part of an overview of what's in the novel:

The less ‘accidental’ title that he came up with later was Trzy pokolenia, Three Generations. Such a title would certainly have helped Prus’s contemporary reviewers avoid many misreading and misunderstandings. In particular, the identification of ‘the doll’ with Izabela can only result in a considerably flattened, one-dimensional image of the novel. It is, of course, among other things, also a great novel about a middle-aged man’s ill-fated love for a pampered and affected young woman. But Wokulski’s infatuation is just part of his psychological profile and is not the only force animating the plot. Wokulski, while The Doll’s dominant figure, is flanked by two other characters vital to the novel: the old store-clerk Rzecki and the young scientist Ochocki. These three serve as representatives of the ‘three generations’ of ‘our Polish idealists.’ The thoroughly honest and humane but also disarmingly naïve Rzecki is a late child of the Napoleonic era, able to think only in outdated, Romantic categories of sacrifice, conspiracy, and messianic mission. Wokulski is an ‘idealist’ of the transitional phase in history: from the years he spent in Siberia as a punishment for his involvement in the January Uprising until his current position as a highly successful Warsaw businessmen, his life connects the end of the Romantic era with the beginning of the new Positivist one. (His commercial success actually stems from trade with Russia—one of the novel’s many pregnant ironies.) His ‘idealism’ is incomparably more concrete, active and rational than that of h is elderly subordinate and confidant. Wokulski’s own Utopia can be built,or so he claims, through wise investment and sound economic policy, for only a nation with economic independence has a right to political independence. Finally, Ochocki is a new type of ‘idealist’, one of those who, buoyed up by their faith in scientific and technological progress, pin all their hopes on society’s intellectual maturation.

… ‘The decay’ which, in Prus’s own words, forms a background for their dreams and deeds, is not just the decay of the obsolete Romantic ideology. It is also, and perhaps even more so, the decay of Positivist beliefs. The fundamental idea of both Western and Polish Positivists—their concept of society as a gigantic organism, whose parts function harmoniously for the benefit of the whole—could not sound more ridiculous than it does here, when confronted with a starkly realistic picture of contemporary Polish society, chronicled so accurately by Prus the journalist. If this society is a living organism at all, it is the organism of a Colossus with clay feet and a very little brain. It has a disenfranchised, hopelessly vegetating lower class at the base and aristocratic nincompoops, like Izabela’s father, at the top. For a former enthusiast of Positivism such as Prus, who had placed so much hope in the enterprising spirit of the middle class, it must have been painful that between the workers and the aristocracy there was little more than isolated figures like Wokulski, whose every effort at lasting social improvement (not merely philanthropic improvisation) is doomed to fail. Lll prus’s ‘social decay’ is a mire of stagnation. Every effort that carries some weight has to sink sooner or later.

… His keen observation dissects society not merely along its vertical axis. It also moves horizontally, revealing, for instance, the immobilising, destructive results of ethnic animosity. Polish-Russian and Polish-Jewish conflict can find, in the eyes of Prus, neither a rational explanation nor an easy solution. It tears the fabric of society even more irreparably than the class distinctions.