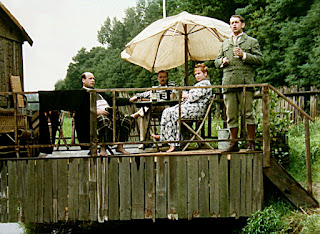 Jiří Menzel’s movie based on Vladislav Vančura’s Summer of Caprice highlights the “cinema ready” nature of Vančura’s novel. Menzel changed little, following much of the book. From the Criterion Collection’s essay Pearls of the Czech New Wave (a recommended read for the other movies listed, too):

As it opens, three friends in their fifties—Antonín (Rudolf Hrušínský), the proprietor of a bathhouse; Roch (František Rehák), a canon; and Major Hugo (Vlastimil Brodský)—are frolicking away the day swimming in a placid pond, smoking cigars, and drinking wine. Representing business, religion, and the military, the men are philosophical sparring partners as much as bosom buddies, engaging in debates about spirituality, commerce, and war. … A sudden rainstorm rousts the men from their diversions, a harbinger of change presaging the arrival in their village of the acrobat and magician Ernie (played by the amazingly dexterous Menzel himself, who shows off his tightrope-walking and handstanding skills). Ernie piques the erotic interest of Antonín’s wife, Katerina (Míla Myslíková), and the performer’s assistant, Anna (Jana Drchalová), piques that of all three men, who fumblingly attempt to seduce her (Antonín with a foot massage, Roch with poetry, Hugo with food). All these yearnings may as well be mere daydreams, however, as once the summer is over, Ernie and Anna get back in their caravan and leave the frustrated romantics to their own devices again.

The film could have easily been turned into a screwball sex comedy that would have undermined Vančura’s story. Fortunately the director didn’t go in that direction. Menzel captures the wistful and longing nature of the book very well—Anna awakens the passions of the middle-aged men but their inability to follow through on their desires highlights the melancholic feeling. Despite their bantering and barbs, their friendship remains at the core of the story.

Despite the faithfulness to the novel and the fine acting, the movie didn’t always “click” with me and I’m not exactly sure why. The languid pace and little action reflect the novel perfectly. I think part of it had to do with the ambiguity Vančura built into the story—were the men successful in their desire for Anna? Menzel removes the doubt, although his approach does play up the ineffectual nature of the men. His change in the major’s involvement during the fight between the magician and Anna also troubled me, but the modification does make for a funny final scene with the battered, bruised, and berated men sharing a drink while mulling over their humbling experiences.

As Obooki pointed out in a recent post, a much older Menzel points out in an interview there is a lack of compassion in current cinema. Capricious Summer gave the director a chance to highlight the compassion Vančura developed in his characters while also playing up the quirkiness of the place and people, providing a fun celebration of friendship and melancholy. 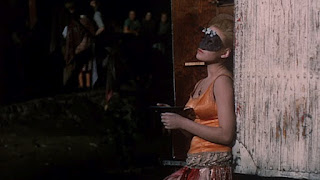 I almost always prefer the book to the film adaptation, Dwight, so it's interesting to hear that the loss of ambiguity from book to film might have resulted in the difference for you here. Maybe that's a subtlety that gets lost in translation so to speak. In related news, Facets Video puts out a catalog that makes me drool with envy and consumerist frenzy...

I've stated many times I don't mind changes from the book because it's a different medium and has different constraints. Let's just say that I enjoyed the movie in a different way than I did the book, in part because of that loss of ambiguity. That's why I included the excerpt on the canon and Anna in the previous post...it allows you to make up your own mind just how much happened between them.

I mentioned Facets Video because of the recent release by Criterion Collection (I'll mention the essay I linked again)--I'm not sure if there were any extras included with it or not. There were no extras with the Facets version. Thanks for the heads up on their catalog!

I sometimes prefer the movie but mostly also like the book better. A perfect adaptation however can add something additional, highlight what the book couldn't capture.
I remember now that I've seen a movie by Menzel before only cannot remember the name. annoying.
I'm not sure why this one didn't click with you but that happens. I will note tha author.

Don't get me wrong--I really enjoyed the movie but I felt a certain...detachment from it. I still recommend it and definitely recommend the book. Thanks Caroline.