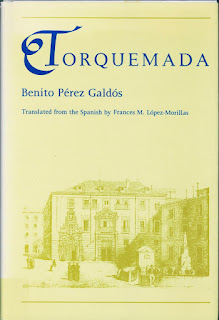 “[L]ook at the monarchy coming to terms with democracy, and the two of them eating off the same plate in the tavern of representative politics. And was this example not sufficient? Well, here was another. The aristocracy, an old tree with dried-up sap, could no longer survive unless it was fertilized (in the sense of manured) by the newly rich common people. And the sweat of the people’s brow had brought about some dandy little miracles in the last third of a century! Weren’t there a lot of people rolling around Madrid, lolling in carriages, whom he and everyone had once known selling dried beans and salt codfish, or lending money at interest? Were not many who in their childhood had been out at elbow or had gone hungry to buy cheap shoes, lifetime senators and councilors of banks by now? Well and good: to this element Torquemada belonged, and he was a fresh example of the people’s sweat fecundating--he was incapable of rounding off the sentence.” (page 131)

Dr. Rhian Davies provides a helpful summary page of the Torquemada novels at The Pérez Galdós Editions Project. In my post on the movie The Grandfather, I mentioned several themes that have run through the novels by Galdós I have read, many of which appear in Torquemada on the Cross. I wanted to pause and look at a few that are prominent in this novel. (See the “Story” post for storyline and names.)

Changing social dynamics
Torquemada proves to be a humorous example of the nouveau riche, an expanding class in Spain Galdós’ liked to highlight. Viewed as a leech, preying on both the rich and poor, the moneylender had trouble changing his miserly habits or moving outside his lowly social circle:

“Circumstances had changed for him with the fabulous growth of his wealth; he had a vague feeling that he had risen to a higher social category; whiffs of grandeur and gentlemanship, that is, of gentlemanliness, had risen to his nostrils. Impossible to establish himself in that higher state without changing his habits, and without repudiating to some degree all those ignoble arts of miserliness.” (page 90)

The Aguilas, a noble and gracious family that lost all their money, provides a counterbalance to Torquemada. Rafael del Aguila, disgusted by the way Torquemada accumulated wealth and his buffoonish behavior, wants nothing to do with the miser. Donoso upbraids Rafael, noting the “world has progressed” on the matter of where wealth comes from. Unspoken, but definitely hovering over Donoso’s rebuke, lies the question of the source of the old nobility’s wealth—was it always as untainted as Rafael idealized it? The first quote, by Cruz, in the “Story” post highlights the tension of the changing dynamics. For her, the family’s nobility and pride were nice but the humiliation of being in debt has made her realize that dignity and noble lineage won’t guarantee a meal.

I focus on this theme because Galdós explicitly draws a distinction between wealth, nobility, and morality. Torquemada’s wealth came from his business acumen, luck, and friendships…nothing related to his background or from his moral beliefs. In contrast to the miser are seemingly moral, upstanding people (like the Aguilas) experiencing poverty because of bad business deals (regardless of the motives behind the deals). Galdós presented an emerging structure in Spain where wealth was dissociated from morals, social prominence from nobility. Needless to say there were mixed feelings about these changes.

Political favoritism
Some institutions were not changing, as highlighted by the corrupt judicial system. The Aguila’s case, the reason Doña Lupe recommended Torquemada merge with the family in the first place, moves at a glacial pace toward resolution since money and social standing are needed for it to progress. Denoso sacrificed time, money, and effort in advancing the case but his resources are exhausted. It will remain to be seen in subsequent books how the case is moved forward and resolved.

Potential improvement
Another theme common in Galdós’ novels, or maybe better termed as his philosophy, focuses on the potential (and ability) of people, and thus society, to improve. While Torquemada may be the obvious case, rising up from humble origins and stumbling toward respectability (of a kind, at least), other characters reflect this as well. Torquemada’s business student, Doña Lupe, shows that even on her deathbed she had learned his lessons well and was able to initiate shrewd deals. Cruz and Fidela, already kind and virtuous, learn humility while maintaining their pride. Granted, not all improvements work. Galdós highlights the difference between superficial improvement and real change, including the provisional nature of some improvements. The latter was shown in Torquemada’s relapse, ending his quest to do good deeds after his son died.

What might be called a subset of this philosophy is the nature of most of Galdós’ characters—few are either completely good or bad. Most of them prove to be drawn in a complex, human manner which I’ll explore some in the next post.

Dwight, would it be fair to say that the Galdós you've read is less bleak or less cynical than the Baroja? Galdós seems to be given more credit for his "panoramic" portraits of Madrid--and by extension Spain--but I don't know whether that has to do with the size of his canvas or his subject matter and themes. Help!

In general I would say Galdós is more optimistic than Baroja, but I’m not sure that’s the right way of putting it. Maybe more along the lines that Galdós and Baroja paint similar pictures but they choose to emphasize different things. Both men seem to believe things can be improved, but Galdós is more optimistic about the potential while Baroja includes a feeling of disillusionment or disappointment. Maybe some of the difference has to do with the timing of the novels I’ve read by both of them—even though their careers overlapped a few years, everything I’ve read (or plan to read) by Galdós is pre-1898. I wonder how much his work changed in the new century, especially since most of that work was for the theater. It would be interesting to see the changes to El Albuelo in adapting it to the stage, not just because of the different formats but also reflecting the difference in dates.

Regarding the panorama/scope question, I wouldn’t say Baroja is any less panoramic than Galdós. The Struggle for Life trilogy is every bit as sweeping in scope and content as Fortunata and Jacinta (although you see two very different sides of Madrid). And the Baroja’s novels I have read delve as much into moral or philosophical questions as does Galdós (if not more at times). My guess the term “panoramic” is used in conjunction with Galdós because of the interrelated nature of some of his novels (such as having common characters between them). In the terms you use, I think that interconnectedness of novels make for a much bigger canvas, which allows more detail to be filled in over time.

That sounds likely, that 46 interconnected historical novels gets you to "panoramic."

I joke about the need for a giant book blog Galdós project, but you are demonstrating why the joke is not really a joke. The Torquemada books sound as good as I feared.

AR: Feared? Only in the "Great, now I have even more I want to read" meaning, I hope. I'm spending way too much time on them because they are so good. I'm probably going to back off on the last two books and just post some excerpts.

Richard: I should have previewed my response...I didn't realize I replied with an entire post!