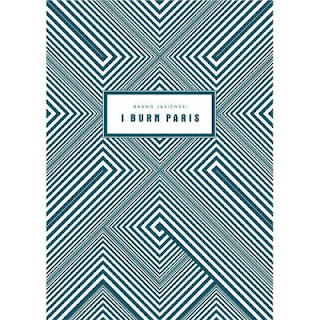 Please see my introductory post on I Burn Paris which has some good links, including the Afterword by Soren Gauger.

The story starts with Pierre, an assembly-line worker in an automobile manufacturer, fired from his job due to “France’s lousy economic condition”. Pierre, out of frustration at his inability to find a job and the infidelity of his girlfriend, poisons the water supply of Paris with a super strain of bubonic plague. Pierre sees pre-plague Paris as a debauched place, full of prostitution (used often as a metaphor for decadent capitalism, along with jazz) and other vices—it is the system he rages against, not any individual. As the plague unfolds the city reacts with a mixture of denial with continued drinking and dancing, then a turn toward religion. As the city is cordoned off to prevent any escape by inhabitants, communes are established along ethnic, political, and racial lines.

It’s at this point that Jasieński steps back to look at notable characters trapped in the city and the role they play as the plague wipes out the populace. Jasieński provides a long history of P’an Tsiang-kuei, his path to Communism in China, and his involvement in the political movement. The Jewish community rallies around Rabbi Eliezer be Zvi as he carries out a plan for some members to escape to America. Businessman David Lingslay, a wealthy capitalists trapped in the city, goes along with the rabbi’s plans after he believes he will contract the plague. Capt. Solomin and comrade Laval represent the White and Red side of Russia.

As Jasieński puts it, the plague “leveled social stratification” by indiscriminately killing rich and poor alike while the partitioning of Paris reflects one bad side of human behavior—the tendency to fragment instead of working together. During the crisis some people perform great acts or represent a better side of human nature. P’an’s education and personal drive place him at the head of the Communist coup in the Chinese district. Laval executes a daring plan to feed the Soviet quarter. David Lingslay ultimately does the right thing. A professor works tirelessly in the Chinese sector to find an antidote even though he saw P’an murder his son.

Prisons survive untouched thanks to having a separate water supply and no movement of people in or out of the fortresses. After the last death in Paris from the plague, the prisoners (mostly political in nature) escape and found their own colony safe from the outside world. While the whole novel is political in nature, the end section after the establishment of this communist utopia provides the most idealistic language. Meanwhile, France has set up a new capital in Lyon after writing off Paris and Jasieński tantalizes the reader with the implication that what happened in Paris will be repeated there and in other major “capitalist” cities.

I wish I could discuss I Burn Paris avoiding some of the messages underlying it but it’s not possible since Jasieński’s message is the political. Fortunately he’s not a one-note author and there’s more to the novel than politics. I’ll focus on translator Soren Gauger’s excellent Afterword since it turns out much of my response to the book is similar to his although I want to delve into a few areas where I diverge from his conclusions. Gauger divides his essay into Objective, Quasi-objective, and Non-objective sections. From the Quasi-objective section:

I Burn Paris remains a reluctantly acknowledged masterpiece in part because of all the ambiguities. The effect comes from following moral impulses so obsessively that they sometimes become their own opposites.

Gauger details some of the ambiguities, but I’m not sure I would label all of them with that title. There are several cross-currents moving above and beneath the surface of the novel, the biggest of which is the noted spread of Communism at the same time as the spread of a “deadly and unstoppable plague.” Jasieński provides a catastrophe as necessary in order to implement a successful communist society, one that will soon repeat in Lyon. Deeper than the subtle message that death and communism spread together is his implied (intended or not) verdict that communism has to be separated from the rest of the world in order to thrive. A deeper ambiguity appears in Pierre’s judgment about the communists around him in prison from a statement that could be read in two different ways depending on the identity of “They” starting the second sentence:

No, these people [political prisoners] don’t know how to hate! They have heaps of plans for replacing one machine with another. Replace this one with that, and again they spin circles, cogs mesh with cogs, they pull, drag, carry the defenseless human splinters and again they’ll bloody their hands on the black spokes of the wheels, these terror-crazed Pierres, incapable of stopping the wheels, or stalling them for even a second.

Meet the new boss? Or replace the system since fighting against the machinery will be futile? Even with that uncertainty, what isn’t ambiguous is Jasieński’s belief that communism should prevail and that society would be…well, I’ll let you read (and I will resist further, obvious comments):

Where once the Place de la Concorde had stretched with a measureless sheet of polished asphalt, from La Madeleine to the Chambre des Députés, from Champs-Elysées to the Tuileries, a meadow of ripe grain now rippled in the gentle southerly wind. This grain was being gathered by mechanized harvesters driven by brawny, tanned men in white undershirts. Men and women dressed in the same light harvesting clothes were nimbly piling the ready sheaves onto a waiting truck. At the edges of the field on all sides, women rested and breast-fed their infants.

Outside of the communist propaganda, Jasieński proves to be very sympathetic to individuals as he explores their humanity and ability to do the right thing regardless of ideology. He also emphasizes the ties of brotherhood, heavy-handed at times such as the case of Boris and Sergai, Russian brothers from the Red and White sides. In addition, Jasieński isn’t afraid to detail human failings without regard to ideology. The anti-Semitism Jasieński highlights isn’t limited to Capt. Solomin (which Gauger points out) but occurs in the Soviet and American camps as well.

I Burn Paris book may not be the masterpiece claimed but it has a lot to recommend. Jasieński’s language can be hypnotic at times as the reader has to decipher familiar things described in an absurd or bizarre manner as details in a world where the individual is of no concern to those in power. Fortunately not everything depends on propaganda and Jasieński can provide layers of meaning, sometimes clear but often ambiguous. Pierre's descent into madness are, as Gauger notes, a compelling section. Jasieński also focuses on the difference that brief moments can make in a life, whether through actions taken or images retained, both of which can propel an individual to greater achievements. The fantastic and bizarre that Jasieński describes, both in subject and description, makes for a thoughtful, disturbing read. 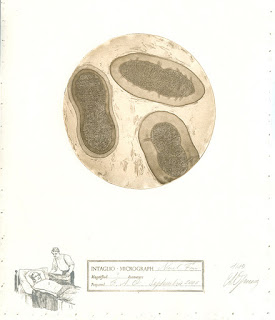 One of the illustrations by Cristian Opris from the book
Picture source
Posted by Dwight at 1:21 PM

Thanks to your initial post on I Burn Paris I picked up a French copy at the library and started it this weekend. The preface to this edition, by Benoît Rayski, is as impassioned a preface as I've read to anything, sternly warning away any readers who have "allowed [their] hearts to dry out" and who, by an "invalidism of the soul," partake of "an ideology dominant today" that the poor are primarily to blame for their poverty. For these readers, Rayski insists: "Non, non, et non, Je Brûle Paris n'est pas pour vous."

Sounds like Jasieński and Rayski would have made good fellow travelers.