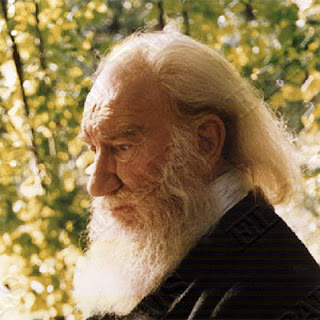 
"Look at each other closely, sons born of my cooks, fathered by my stable boys. You wanted to cage the Count of Albrit, who founded the Fishermen's Fraternity, who brought you water from Santaorra, who funded the Verola road, and the bridge over the Caudo river. My parents built the hospital, and the foundling hospital and the La Pardina chape, where you went to midnight mass every Christmas Eve not out of religious fervor but to receive the generous Christmas boxes we offered you. And how did you want to repay me for all those favors? By locking me up like a rabid dog, selling your consciences to the highest bidder! Look at yourselves, rooting around like pigs. Listen carefully. The poor lion of Albrit, who asked nothing of you and needs nothing from you, proclaims his contempt for you with every drop of his soul. He doesn't want even an inch of land from your city to bury his tired bones. There'll surely be room for him in the sea. Keep this world of yours which I don't understand, where lies infamy and greed do as they please. Enjoy your meal. Or rather, may it give you indigestion!"

Since I’m on a roll with reading Galdós, why not watch a movie based on his work? Since I haven’t read the novel or the play the movie is based on I don’t know how faithful it is to either original source. The movie follows many of the same themes (as well includes the humor and melodrama) I’ve found in Galdós’ novels.

The story is simple—the grandfather of two girls discovers a letter written by his son on his deathbed, acknowledging one of the girls is not his daughter. The grandfather, an adventurer who has spent all his money chasing gold in the Americas, seeks to find the true granddaughter of his bloodline. While Don Rodrigo, el Conde de Albrit, has no money to bequeath, he views bloodline and honor his most important legacy. The daughter-in-law, Doña Lucrecia Richmond, refuses to divulge the secret and tries to get rid of Don Rodrigo. The central question Don Rodrigo has to resolve is which does he value more--love or honor? Are they compatible?

A few common Galdósian themes highlighted in the movie: changing social dynamics (especially the emergence of the nouveau riche), criticism of the church (not in theory as much as how it is practiced), political favoritism (advancing people less than deserving), and the potential improvement of people. Galdós usually handles these subjects with a light touch and the movie does, too. The harshest judgment comes with the opening quote—after reciting the poor origins of the city’s leaders (who had just tried to shut him up in the monastery), Don Rodrigo highlights their less than honorable rise to power while harshly condemning them. Reading between the lines, Don Rodrigo would probably be more amenable to the changes in society if the debt owed to previous generations were acknowledged and respected, not to mention more emphasis on the older positive qualities which seem to have been discarded. The only Galdósian trait I could have done without is the overly melodramatic moments, fortunately kept to a minimum except for the ending.

- I wanted to highlight the wonderful character of Pío Coronado (played perfectly by Rafael Alonso, who died before the film was finished), the girls’ tutor. In one sense he’s the Fool to Don Rodrigo’s Lear, helping the older, disconcerted character find meaning and purpose, not to mention his only friend. I don’t want to overstress the Lear imagery, though, just to note there is clearly that feel.

- The scenes with Don Rodrigo and his granddaughters are joyful moments. Dolly and Nelly prove to be loving children, which highlights the ambiguity in many parts of Galdós' writing. Even though viewer may be sympathetic with Don Rodrigo's insistence on honor, especially given the lack of it in many of the surrounding characters, it's difficult not to cringe at his intent to punish an innocent girl.

- Fernando Fernán Gómez is wonderful as the grandfather and Cayetana Guillén Cuervo proves to be a beautiful match for the old lion.

- The filming locations around Asturias, Spain are beautifully captured by Raúl Pérez Cubero. I know it’s become clichéd to say “it’s a beautiful film to watch,” but this one really is, for the indoor scenes as well as the outdoor shots.


Don Rodrigo: "If you were asked to choose between honor and love what would you do?"
Pío Coronado: "Look, if that thing which we call honor could become something material it would be very good for fertilizing the land. Manure. For growing lettuce and tomatoes. That is honor, in my humble opinion. A piece of shit."

your post actually contains two recommendations in one. I haven't read any of Galdós' novels and the movie sounds like one I would enjoy. I hope I can manage to find it.
I like the themes and certanly don't mind that the cinematography is equally satisfying. I'm quite partial to beautiful pictures.

Fortunately the movie should be fairly easy to find (I got it from Netflix). The only novels of his I have read are Fortunata and Jacinta and the Torquemada novels, but I highly recommend them, too. Enjoy!

I've seen the actor Fernán Gómez in three or four movies now, but I think the picture you ran is the one where he looks most like a gnome! Anyway, like Caroline, I agree on the double recommendation nature of your post--am going to try to make room for Fortunata y Jacinta later in the year, but this film should be doable as well in the meantime.

I'll admit this profile picture of Fernán Gómez isn't that flattering. The description I've used is imagining Dennis Quaid in 20 years playing Walt Whitman...that's the first thought I had.

I'm hoping my notes on the Torquemada novels will help stimulate interest in Galdós, too. Of course, that's one of the curses of lit blogs--too many recos, not enough time.