Larks on a String (1969 movie: Czechoslovakia) 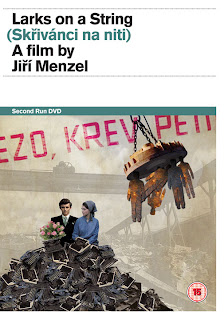 Bohumil Hrabal has been a favorite author of mine recently. Adapted for the screen by Hrabal and Jiří Menzel and directed by Menzel, this movie is a delight to watch. It captures Hrabal’s style well—he takes a depressing topic like life under Communism and focuses on the beauty of life, especially among offbeat characters, amid the travesty. A quick history on the film—Menzel and Hrabal filmed this in 1968 during the upheaval of that year in Czechoslovakia, only to have it suppressed by the new Communist regime. When the Communist regime fell the movie was officially released in 1990. Unfortunately several of the original scenes, censored during an attempt at an official release earlier, were saved only on deteriorating second copies.

I watched the movie from Second Run DVD, which is quickly becoming a favorite source for movies. Menzel filmed a 10 minute answer session on the film in which he provided the genesis for the format of the movie:

Considering the source is from short stories the movie doesn’t feel disjointed at all, uniting the various stories that unfold into the one braid Hrabal wanted. The setting begins in the late summer of 1950 (a reference is made to the Battle of Pusan in the Korean War at the start of the movie...although it's hard to ignore the same set of clothing is used regardless of different seasons) in the steel-manufacturing city of Kladno. We see the workers at a scrapyard, assigned to this dirty task for political reasons. Included in the group is a philosophy professor who refused to shred decadent Western texts, a public prosecutor who believed a defendant deserved a defense, an entrepreneur who had the gall to employ other workers, a barber that proved to be redundant since the country officially had 60% too many barbers, a professional musician because he played a bourgeois instrument (the saxophone), and a cook who refused to work on Saturdays. Voluntarily joining the group was a dairy farmer who closed his farm in order to help the state, although his idealism proved he would be the first casualty from the group.

Female prisoners also work in the scrapyard, serving a labor sentence for trying to defect. The guard overseeing the prisoners is about to be married to a free-spirited girl, someone who would rather dance with members of the gypsy band instead of participating in the formal wedding feast. The political supervisor running the scrapyard brags about his working-class past (while symbolically helping toss scrap into the rail-carts) and his concern for hygienic practices, the latter of which includes his penchant for bathing pubescent girls. Hrabal and Menzel even show the political boss' humanity, with a very awkward and depressing home scene where he drunkenly hopes to please his children. Here and elsewhere the banality of oppression is on full display.

Glimpses of the need for human contact shine through in the movie, ranging from the simple touching of hands to sex under the barbed wire of the prison. Despite the government's attempts the Communist symbolism of the junkyard, scrap being melted down into high-grade steel, doesn’t carry over to the melting down of people into a new human form designed to serve the state. The scrapyard became a failure when quotas were raised while the people never lower their resistance to indoctrination and control.

I’ve mentioned in previous foreign movie posts (or at least in the comments) that I wonder about the translation of cultural items in a movie. A few that stood out here was the graffiti scrawled in chalk, probably to offset the propaganda posters’ banal sayings. Another example: the supervisor upbraides workers not wanting to “get closer to socialism—what would the author of ‘Red Fire over Kladno’ think?” Sounds like a Communist tract that didn’t survive until the Velvet Revolution. What does translate well is the propaganda, especially that used in indoctrinating children. A teacher and her class arrive at the scrapyard to distribute red kerchiefs (May Day, perhaps?):

”The situation has worsened due to imperialists who are using our reactionaries for their evil aims. [Pointing to the female prisoners] Look at those repugnant, imperialism soaked faces. The fascist beast never sleeps. They stick their snouts into our blossoming garden. They exploit these monsters for subversion. We stopped them defecting to their benefactors. Keep away from them. Don’t be like one man who got in and impregnated an inmate. Another decadent capitalist soul for the world! We’re too kind! It seems that work discipline is vanishing.”

I have many more notes, such as the symbolism of typewriters and crucifixes being thrown in the carts for melting down. I'll stop, though, with one philosophy discussion that ties in to the final scene. While the male workers are walking at night and discussing Kant (among other things), a man falls in an open latrine: “This is man’s glory! His head full of ideals, his feet stuck in shit! Victory is one big shithouse.” 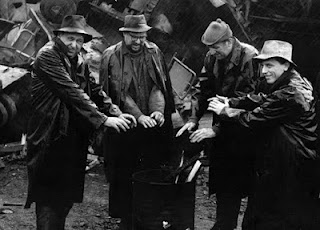 This does sound extremely good. I absoluetely want to watch it. I find it amazing that he was capable of using short stories and give the feeling of a coherent work. I haven't seen a lot of Czech movies but the few I saw were very different.

Thanks Caroline--I definitely recommend it. Not knowing the original stories, I don't know how coherent the collection was originally but they did a good job of bringing everything together here.

I'll have to add this one to the list, Dwight, and I love that joke that's the supposed source for the narrative "braid." Too funny! By the way, your movie picks so far have been exactly the sort of choices I was hoping to hear more about via the "film festival," so I'm really interested in seeing the future choices you have in store for us. Cheers!

Thanks Richard--glad it's in the spirit of the festival!