Scanning through the links I posted on Vasily Grossman and his book Life and Fate I see the reviews do an extremely good job summarizing the book and covering his life. Instead of restating the same points I’ll post on a few topics in the book most of those reviews did not cover (probably for good reasons, but I won’t let that stop me).

I’ll start with the title since it puzzled me. Why is “Fate” paired with “Life” in the title? Grossman uses the word “fate” in the book with a variety of meanings. In the most common usage, characters use it in the expected manner—a predetermined course of action or results they are unable to influence or change. Grossman also uses it when looking at decision points and the cascade of events after it, some predictable while others are unforeseen (more on this another post).

Then there’s the meaning in Chapter 43 of Part One, the first chapter with Sofya Osipovna Levinton and the journey to the gas chamber. He starts out with a fairly standard description of fate while also laying groundwork for another meaning: “The most fundamental change in people at this time was a weakening of their sense of individual identity; their sense of fate grew correspondingly stronger.” (196) Grossman builds on this: “What saves people when their bovine melancholy, their mute fatalism yields to a piercing sense of horror—what saves people then is the opium of optimism.” (198) The reader knows the outcome for many of the characters as soon as we meet them. While reading Life and Fate and viewing characters’ optimism, it’s easy to understand why Hope was in Pandora’s jar with the evils of the world since it can provide a harmful element when there is no foundation for it. Hope remained in the jar, though, proving to be beneficial at times—the “opium” of hope allows humans to carry on after the foundations for life have been extinguished.

We're now at Grossman's additional meaning of fate: “Sofya now understood the difference between life and existence: her life had come to an end, but her existence could drag on indefinitely.” (199) Existence, or fate, can mean a person stumbling through their remaining days after freedom has been denied. Instead of bowing to her fate, Sofya finds a new meaning in life—to be a mother to little David for the short time they have left. The human spirit, what separates Life from existence or fate, proves to be a current running through the novel.


There are several themes providing unity to the book but one thing provides a physical unity—the Volga River. Many of the settings are either on the Volga or on one of the tributaries that is part of its watershed: Stalingrad (now Volgograd), Astrakhan, Moscow, Ufa, and Kazan. The Volga provides a symbol during the siege of Stalingrad—while the Soviet soldiers keep the Germans from reaching the river before the counterinsurgency begins, they retain hope. The river provides a common element for many of the characters—something providing safety or signifying danger. 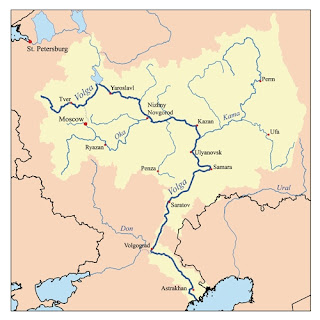 The Volga River watershed
Picture source
The reason I’ve been stressing the need to visit the BBC site and download their dramatization of the novel is because there is a time limit on availability. I have listened to five out of the total eight hours and recommend it but I plan on a separate post to note some context and caveats.
Posted by Dwight at 4:47 AM

Antony Beevor's "Stalingrad" also emphasizes the Volga as part of Stalin's no retreat policy for Stalingrad: forces weren't supposed to withdraw to the other side of the river under penalty of being shot for desertion, and yet some units--such as artillery groups and reserves that were being brought into the city from elsewhere--had to be positioned there for lack of space within Stalingrad itself.

I have been wanting to read "Stalingrad" but just haven't gotten around to it. Looking forward to more comments on it. And as you'll see in Life and Fate (or maybe already have seen), Stalin and other command decisions make little sense at times given the situation.

I'm about 3/4 of the way through "Stalingrad" and can highly recommend it as a companion piece to Grossman's novel. Beevor spends a lot of time noting how command decisions by both Hitler and Stalin effectively crippled the leaders of the armies on both sides, but his military narrative as a whole is just as edgy as Grossman's novel in terms of giving you a feel for what the day to day insanity must have felt like for the common soldier stuck in the middle of the conflict. To this point in my reading, astounding works, both of them.