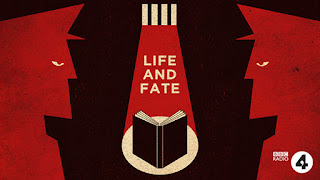 I mentioned it in earlier posts so hopefully you downloaded the podcasts of Life and Fate from the BBC site before they were deleted last week. My reaction to their production is similar to the reaction I had with the book—a few minor quibbles but extremely impressed with what was accomplished. How do you turn an 850 page book into an 8-hour radio show? Easy answer—very carefully. Fortunately that’s just what they did.

The amount of characters has been pared down so it will be easier to keep up with who is talking and what is the relationship to other characters. Having just read the book I found it generally easy (but not always, especially where changes to the book were made) to keep up. For those that haven’t read the book, I can see where this might be a challenge. BBC4 Radio provided a
character map that should be helpful, both for the radio program and the book.

From an interview with Kenneth Branagh, who plays Viktor Shtrum:

“I think Grossman wanted both [Viktor as a flesh-and-blood character and a political metaphor]. He makes Viktor a kind of poet-scientist who is interested in the beauty of maths and the beauty of physics; for whom the truth, the scientific truth, is all.

“But at the same time he gives him an obsession: a sort of rather weakening and yet very recognisable obsession with the wife of a colleague. Grossman makes him very flawed and very human.”

I don’t have many weak points to highlight. There are some parts of the book I wish received more attention than others, but that’s more of a personal feeling since I don’t believe the overall message of the book was weakened. The same goes with decisions made on what to include—when you’re limiting yourself to 8 hours you have to be ruthless at times in your cuts while working to include as much as possible to convey the overall feeling and meaning. The annoying part of the broadcast for me was the choice of accents and slang—whenever a setting involves foreign characters there has to be a choice on how to have them speak and the language they use. I don’t really care on the final choice as long as it’s consistent. I know it’s a minor point but I found the hodgepodge of accents and inclusion of so much British slang in mouths of the Russian characters distracting.

For anyone who downloaded it but hasn’t listened to it yet, I would provide a caveat: if you are planning on reading the book before listening to the podcasts, I recommend finishing Part Two in the book before starting to listen. Grossman presents only a few chapters at a time on any character or setting while the radio program chooses anywhere from one to a few characters to follow and present all of their sections in a linear fashion. For example, the first episode focuses on the Shtrum family in Kazan and Moscow which takes you to the middle of Part Two of the book.

There are many areas I found extremely well done. The intensity from the book, disturbing and harsh at times, was maintained. It’s not an easy book to read, even when ignoring the size and structure, and this production includes many of the unsettling details Grossman provided. One of the strong points of the radio production’s structure was the “pairing” of character storylines in the early episodes: Viktor and Lyuda, Krymov and Zhenya, Vera and Lt. Viktorov. Since these are scattered throughout the book, pairing characters in one episode helped bring out the emotional component of Grossman’s novel. I’ll limit myself to one more strong point of the radio production: by Part Three in the book the reader has most of the storylines fairly well established but connections between characters can be easily forgotten. Listening to the radio episodes helped keep the connections clear for me—anything that helps reinforce the intricacies of Life and Fate should be recommended on that point alone.

Along with Grossman’s book, highly recommended. If you haven't read the book the names and settings may be a little confusing, but I think it won't take long to understand each part and put it into its place in the overall story.

If you missed downloading the podcasts, I burned them to CDs—I’ll be happy to mail you my copy of the discs (my email address is in my profile). (The CDs have been spoken for)
I would love to see other bloggers posting on this book and program.

A few video clips about the program:

Kenneth Branagh and David Tennant on Life and Fate (Part One):

The TV ad for the series that highlights the arrest of the novel: