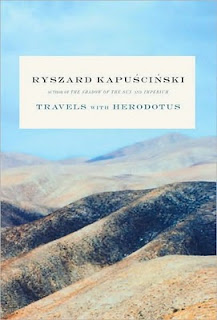 Ryszard Kapuściński's Travels with Herodotus is a marvelous half-memoir of his career and half-reflection on Herodotus’ The Histories. Other than a few articles I’ve read over the years, this is my first extended exposure to Kapuściński. I have definitely shortchanged myself in not reading more of his work before now. Kapuściński was a Polish journalist/correspondent that consistently put himself in some of the world’s hot spots. From the TIME.com article on this book:

Before his death in January [2007] at age 74, he had been jailed 40 times, witnessed 27 coups and revolutions, survived four death sentences, contracted tuberculosis, cerebral malaria and blood poisoning, and was once doused with benzene and nearly set ablaze. "I was driving along a road from where they say no white man can come back alive," he wrote of that incident, in war-torn Nigeria. "I was driving to see if a white man could, because I had to experience everything for myself."

The last half of the last sentence sums up the spirit that suffuses Travels with Herodotus as well as Kapuściński’s view of Herodotus. Kapuściński starts with an overview of the situation in a post-World War II college, relating the extraordinary situation of Herodotus’ book’s translation into Polish. I think this part is worth an extended excerpt because it captures several appealing features of the book :

In the mid-1940s The Histories had been translated by Professor Seweryn Hammer, who deposited his manuscript in the Czytelnik publishing house. I was unable to ascertain the details because all the documentation disappeared, but it happens that Hammer’s text was sent by the publisher to the typesetter in the fall of 1951. Barring any complications, the book should have appeared in 1952, in time to find its way into our hands while we were still studying ancient history. But that’s not what happened, because the printing was suddenly halted. Who gave the order? Probably the censor, but it’s impossible to know for certain. Suffice it to say that the book finally did not go to press until three years later, at the end of 1954, arriving in the bookstores in 1955.

One can speculate about the delay in the publication of The Histories. It coincides with the period preceding the death of Stalin and the time immediately following it. The Herodotus manuscript arrived at the press just as Western radio stations began speaking of Stalin’s serious illness. The details were murky, but people were afraid of a new wave of terror and preferred to lie low, to risk nothing, to give no one any pretext, to wait things out. The atmosphere was tense. The censors redoubled their vigilance.

But Herodotus? A book written two and a half thousand years ago? Well, yes: because all our thinking, our looking and reading, was governed during those years by an obsession with allusion. Each word brought another one to mind; each had a double meaning, a false bottom, a hidden significance; each contained something secretly encoded, cunningly concealed. Nothing was ever plain, literal, unambiguous—from behind every gesture and word peered some referential sign, gazed a meaningfully winking eye. The man who wrote had difficulty communicating with the man who read, not only because the censor could confiscate the text en route, but also because, when the text finally reached him, the latter read something utterly different from what was clearly written, constantly asking himself: What did this author really want to tell me? And so a person consumed, obsessively tormented by allusion reaches for Herodotus. How many allusions he will find there!

Kapuściński‘s desire to see what’s beyond the border, what’s on the other side, provides him an opportunity to travel in his job. Upon his first assignment outside of Poland his editor-in-chief presented him with a copy of The Histories which was his companion on many of his trips. The hook is provided for the remainder of this book as Kapuściński weaves his personal experiences with reflections on Herodotus’ achievement.

What follows are remarkable experiences in India, China, and Africa in addition to insights about what it took Herodotus to compile his work. My favorite aspect of Kapuściński’s memoirs is his unapologetic recounting of his experiences, whether he makes explicit the tie-in with Herodotus or not. Language proves to be only one difficulty in understanding a different culture: “Cultures are edifices with countless rooms, corridors, balconies and attics, all arranged, furthermore, into such twisting, turning labyrinths, that if you enter one of them, there is no exit, no retreat, no turning back.” Memory plays an important role in the book (or I should say both Kapuściński’s and Herodotus’ books), finding a way to strengthen the fragile nature of recollection. Kapuściński never hides his admiration for Herodotus’ achievements.

Herodotus’ book arose from travel; it is world literature’s first great work of reportage. Its author has reportorial instincts, a journalistic eye and ear. He is indefatigable; he sails over the sea, traverses the steppe, ventures deep into the desert—we have his accounts of all this. He astonishes us with his relentlessness, never complains of exhaustion. Nothing discourages him, and not once does he say that he is afraid.

What propelled him, fearless and tireless as he was, to throw himself into this great adventure? I think that it was an optimistic faith, one that we men lost long ago: faith in the possibility and value of truly describing the world. … But while maintaining the superiority of his fellow countrymen, Herodotus is not uncritical of them.

Kapuściński shows much of the same drive and determination to learn. He recounts his own experiences and those of Herodotus with equal gusto in order to find out what happened and record it for posterity. Kapuściński ‘s delivery of episodes from The Histories, wanting to know about what was left out as well as what was included, demonstrate his storytelling abilities (although keep in mind his tendency to exaggerate or embellish).

If you are not familiar with Herodotus or Kapuściński, Travels with Herodotus proves to be a great introduction to both writers. Even if you have read The Histrories, Kapuściński’s approach adds insight and new ways of looking at the work. Highly recommended.

Note: translation of the book by Klara Glowczewska

Update (2012 Aug 6): In the wake of Ryszard Kapuściński: A Life by Artur Domosławski (translated by Antonia Lloyd-Jones) there has been a lot written about Kapuściński's inaccuracies (to put it nicely) and his collaboration with the Communist intelligence agency in Poland. A good overview on the dust-up can be found in Neal Ascherson's essay on the book and Kapuściński's writing.

Update (2013 Jan 8): Another review of Domosławski's biography by Daivd Ost at Dissent magazine.

“Passion, passion, passion!” Domosławski quotes Kapuściński telling a friend, speaking of the indispensable quality that makes for good creative work. The only serious weakness of this biography is that we don’t see the passion that is so clearly stamped into Kapuściński’s character. Domosławski focuses more on the logistics of his travels and the veracity of selected texts than on the passions that animated him. We get glimpses of these in descriptions of his encounters with friends and in the reminiscences of those friends. But something about the man remains a mystery. Kapuściński could sit for days with street people and guerrillas, listening but not writing. Other times, he carried a gun, in Angola apparently used it—yet the same man who often overstated banal events kept silent about this. There’s something here way beyond fascination with the third world that one wishes his pupil Domosławski had tapped into. Domosławski gives us a Kapuściński of the Left, but tells us too much about his relationship to the Party and not enough about the ardor in all his choices.

Yet this remains an extraordinary book offering a complex picture of a man and his time, and provoking in the reader the deepest reflections—on literature and journalism, the nature of political commitment, and the challenges to maintaining that commitment as the world changes around you.