A Summons to Memphis discussion 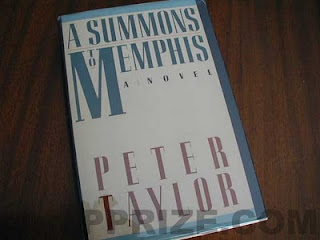 The courtship and remarriage of an old widower is always made more difficult when middle-aged children are involved—especially when there are unmarried daughters. This seemed particularly true in the landlocked, backwater city of Memphis some forty-odd years ago.

Almost immediately upon arrival in Memphis, this Nashville family of ours heard the news of a rich old widower in our very neighborhood who had taken a notion to remarry and who was being denounced and persecuted by his own middle-aged children. The image of that old man was for me one that I would carry sempiternally in my head even until the present time, as some kind of symbol, I suppose, of Memphis itself—a rich old Memphis father, that is, the provisions of his will already well known, deciding suddenly to take unto himself a second wife and thus changing the prospects of everybody concerned, an utterly selfish act on the old man’s part with no care for past family tradition and no thought of how his descendants would regard him. To complete this picture in my head of this symbolic Memphis situation there were, of course, the inevitable middle-aged children coming forward in force—and possibly some of the grown-up grandchildren—coming forward, that is, to assert that they would not countenance such a step on the part of their rich and selfish old widower-father, who cared more for his own gratification and comfort than for the name and honor of the family. Alas, it was a picture we would see depicted all too frequently during the early years of our life there on the banks of the Mississippi River.

I recently read a glowing review of Peter Taylor’s A Summons to Memphis that intrigued me enough to find a copy at the library. While there are some good things to be said about the book, I was underwhelmed. I love Taylor’s prose and style but I think this book would have been better as a short story (or several).

Phillip Carver, a rare book collector and dealer living in Manhattan, receives phone calls from his sisters asking him to come home and help stop their widowed father from remarrying. The family still harbors deep-seated grudges, not to mention emotional stunting, from the father’s dictatorial actions, including relocating from Nashville to Memphis as well as his intrusion into their relationships. After Phillip reviews his family’s history and dysfunction, the reader follows the outcomes of his trip to Memphis and his father’s looming marriage to a much younger woman. Additional trips by Phillip to Tennessee follow as well as more meddling by family members.

Taylor’s prose ambles along, providing rich detail to invoke an early to mid-20th-century portrait of the South. While it is easy to scoff at the premise that the family’s move could have such an impact on the members, I think Taylor means it as an allegory for Southern difficulty moving from past to present. Even if that’s the case, it feels rather clumsy and contrived even though it occasionally provides insight into some of the problems that needed to be addressed. His comments on the mother, who kept her wild side in check with a thin veneer of the genteel manners expected of her, highlights some of these problems: “For Mother it meant a total alteration of her role within our family and at the same time a kind of personal liberation for which she was not prepared and of which she did not know how to make an advantage.”

Phillip rejoices at his liberation and freedom in moving to New York City. “Oh the foolishness of Memphis ways! And I felt a surge of happiness that I had got away so long ago.” As the reader already knows, and Phillip has to find out, his physical move has done nothing to loosen the complex ties to his family and the region. Taylor’s use of Phillip as the narrator, someone physically and emotionally distant from the other characters, proves to be an effective technique in revealing what happens.

The pacing of the book, however, can be maddening. A garden hose, coiled up but slightly tilted, could represent the story’s progress—constantly looping into the past with only marginal advancement in the story. When major plot points appear they feel rushed, as if these points exist only for more endless looping back in time. When this approach is done well, as in Ford Madox Ford’s Parade’s End, each circle into the past builds toward a climatic payoff. Unfortunately there is no payoff here. The constant repetition of words and phrases ended up annoying me instead of building up expectations (which is just as well). Phillip’s “revelation”, if you can call it that, is juvenile at best, which may be Taylor’s point. The entire family is so emotionally stunted that any progress made will be in small increments or, more likely, illusory. The distance between Phillip and his family ends up being a problem since it is more than a physical gap—he doesn’t understand them so there is little he can provide to the reader. We don’t really get to know the sisters and Phillip’s shallow attempt at understanding his father falls flat.

Even though I hate saying anything bad about a book that does have some genuine good moments, I would recommend exploring Taylor’s short stories instead of A Summons to Memphis.

Email ThisBlogThis!Share to TwitterShare to FacebookShare to Pinterest
Labels: A Summons to Memphis, Peter Taylor

I couldn't agree more. I read the book some time ago--perhaps when it first came out, because I knew Mr. Taylor to have been a mentor of one of my teachers. I too found myself puzzled by the acclaim. It's good to know I'm not the only one.

And glad to know I'm not the only one. I wanted to like the book based on the promising opening as well as enjoying some of his short stories. Unfortunately it wasn't meant to be.