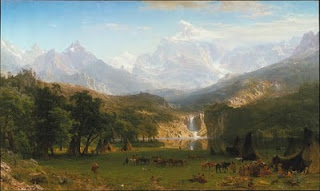 Trevor at The Mookse and the Gripes recently reviewed John Williams’ Butcher’s Crossing, prodding me to look for the book in our library system. Fortunately they had one copy available and it is everything he claims. Trevor covers many of the parts I wanted to address while avoiding what drives the last half of the book (which I’ll try to do too). Fortunately The New York Review of Books released a recent version of Butcher’s Crossing, although if this is the version you read skip the introduction by Michelle Latiolais—it is painfully embarrassing.

William Andrews, a third year Harvard student and son of a Unitarian Church lay minister, for reasons unclear to himself, seeks to experience a freedom and a vigor he found lacking at home in Boston. Under the spell of Emerson and others he heads west and ends up financing and riding along on a buffalo hunt to the Colorado Territory. While Williams highlights the destruction involved as the country moved west, he avoids a simple “innocence lost” tale. There was a high price paid for the westward movement, not just on the land and resources but on those settling the area. The Forward quotations, one by Emerson and one by Melville, remind today’s reader, insulated as we are, that nature can heal and destroy. Nature may judge “like a god all men that come to her”, but it can be an arbitrary, indifferent, and harsh adjudicator. Will, in searching for “the source and preserver of his world, a world which seemed to turn ever in fear away from its source, rather than search it out,” finds more than he was looking for as well as reason to fear. Questions, unasked but implied in those Forward quotes, circle around this power of nature—what does it take to tame or transcend it? What is the cost of taming it?

Andrews, warned that he will come back different from this outing declares “I will only become myself!” For precisely that reason he should have been more concerned at what he would ultimately find. His previous experiences with nature had been restricted to short walks from the college campus and engravings in books and magazines, both of which only hint at what he will see and experience out west. In addition to the power of nature, one of Williams’ themes revolves around not just what we know and learn but, just as importantly, when we learn it. Andrews is constantly looking for something, although he is hard-pressed to express exactly what it is he’s looking for. Although not a strict Transcendentalist, his actions demonstrate a belief in nature and intuition to elevate (or at least placate) his spiritual state. Wanting to encounter nature in its full force in order to become one with it will be a rude awakening. He is able to survive on inner courage and experienced help, proving he has what it takes to belong in the West. The “what it takes” is key and, as he finds out, has little to do with his idealization of nature.

Here are a few quotes from the book, this one as the hunting group approaches the Rockies:

Andrews felt that the mountains drew them onward, and drew them with increasing intensity as they came nearer, as if they were a giant lodestone whose influence increased to the degree that it was more nearly approached. As they came nearer he had again that feeling that he was being absorbed, included in something with which he had had no relation before; but unlike the feeling of absorption he had experienced on the anonymous prairie, this feeling was one which promised, however vaguely, a richness and a fulfillment for which he had no name.

That name will elude him, as indicated during his participation in the hunt:

During the last hour of the stand he came to see Miller as a mechanism, an automaton, moved by the moving herd; and he came to see Miller’s destruction of the buffalo, not as a lust for blood or a lust for the hides or a lust for what the hides would bring, or even at last the blind lust of fury that toiled darkly within him—he came to see the destruction as a cold, mindless response to the life in which Miller had immersed himself. And he looked upon himself, crawling dumbly after Miller upon the flat bed of the valley, picking up the empty cartridges that he spent, tugging the water keg, husbanding the rifle, cleaning it, offering it to Miller when he needed it—he looked upon himself, and did not know who he was, or where he went.

When leaving the valley in the Spring, Will finds that “he would be leaving something behind, something that might have been precious to him, had he been able to know what it was.” Understanding and comprehension elude many of the characters. Even worse, several characters are driven to actual or near madness or to a desolate nihilism (the latter including the hide trader McDonald):

“Young people,” McDonald said contemptuously. “You always think there’s something to find out.”

“Well, there’s nothing,” McDonald said. “You get born, and you nurse on lies, and you get weaned on lies, and you learn fancier lies in school. You live all your life on lies, and then maybe when you’re ready to die, it comes to you—that there’s nothing, nothing but yourself and what you could have done. Only you ain’t done it, because the lies told you there was something else. Then you know you could have had the world, because you’re the only one that knows the secret; only then it’s too late. You’re too old.”

Williams avoids judgment in the book, preferring to present the struggle to tame the West as a mirror to the human soul. Just as man is capable of heroic and horrific deeds, often at the same time, so reads our history.

A highly recommended read, and I look forward to reading Williams’ other two books, Stoner and Augustus soon.

I read Stoner last year and thought it one of the best things I'd read in a long time. I've been putting off Butcher's Crossing so as to intensify the pleasure I hope to get from it when the time is ripe and I finally stumble across a used copy.

There are a few issues I had with ,Butcher's Crossing, but they were minor and I didn't really mention them. Not everything fits together as well as I would have liked, but I think being surprised at how much I liked everything else overtook me. Regardless, I thoroughly enjoyed it and hope you will too.

I've moved up to fourth on the wait list for Stoner in the county library system (started off 6th). Unfortunately they don't have a copy of Augustus, but if Butcher's Crossing is the 'lesser' of his three major works, I'm reading them all.