While I haven't spent much time at C-SPAN's video library, they (thankfully) have more than political events available for viewing. Here is the link to a talk by historian William Goetzmann:

Mr. Goetzmann talked about the book My Confession: Reflections of a Rogue, written by Samuel Chamberlain. He focused on the life of Chamberlain, an 19th century adventurer in the Mexican War, who traveled with criminal gangs. He also talked about Blood Meridian written by Cormac McCarthy who used excerpts of Chamberlain's journal for the book. After his prepared remarks they answered questions from the audience.

I have enjoyed both books for different reasons and I'm looking forward to hearing Mr. Goetzmann's comments (even if it is almost ten years after his talk). I'm hoping to find additional interesting book events in their library.

Two additional links on Chamberlain and his book:

The Texas State Historical Association's site on Samuel E. Chamberlain's My Confession. The picture gallery has a sampling of Chamberlain's watercolors.

Some background on John Glanton's gang by Chamberlain. 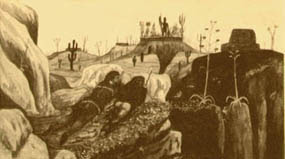 Chamberlain with an Apache in his Sights
(from S. Chamberlain's sketches)

UPDATE: I am including some notes on Goetzmann’s talk. I am not including anything in quotes although there is a mixture of direct quotes and paraphrases.

Belated thanks for this ancient post, Dwight! Just finished Blood Meridian and appreciate the insight into Chamberlain's text and some of the other bibliographical goodies you mention. Do you yourself agree w/the claim that some of McCarthy's violence overkill is self-parodying in nature, by the way? I'm not sure I see it that way, but it's an interesting point to consider.

While there definitely is violence overkill in "Blood Meridian," I didn't see it as self-parodying, although I can see why someone could think so. I saw it as driving home the point that many parts of the west was a bloody and lawless place, sort of like the opening of the radio show "Gunsmoke": "The story of the violence that moved west with young America." It also factored in with larger themes of the book, but I saw it more as a counter to the all-too-common gloss of that movement west. Although I easily could be wrong.

I remember reading "Blood Meridian" in August 2001, and it did more to explain what happened a month later than any talking head on TV did.