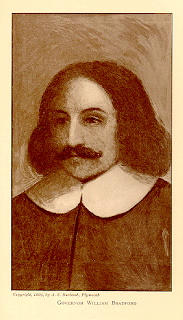 May not and ought not the children of these fathers rightly say: Our faithers were Englishmen which come over this great ocean, and were ready to perish in this willdernes; but they cried unto the Lord, and he heard their voyce, and looked on their adversitie, etc. Let them ther fore praise the Lord, because he is good, and his mercies endure for ever. Yea, let them which have been redeemed of the Lord, shew how he hath delivered them from the hand of the oppressour. When they wandered in the deserte willdernes out of the way, and found no citie to dwell in, both hungrie, and thirstie, their sowle vas overwhelmed in them. Let them confess before the Lord his loving kindnes, and his wonderfull works before the sons of men.
(from Chapter 9)

And thus was this poore church left, like an anciente mother, growne olde, and forsaken of her children, (though not in their affections,) yett in regarde of their bodily presence and personall helpfulness. Her anciente members being most of them worne away by death; and these of later time being like children translated into other families, and she like a widow left only to trust in God. Thus she that had made many rich became her selfe poore.
(from 1644’s entry)

All quotes from the 1962 edition edited by Harvey Wish, supplemented by the Early American Digital Archive link listed below.

William Bradford’s Of Plymouth Plantation covers the Pilgrims during their move to Holland (starting in 1607 and 1608), briefly mentions the 1620 voyage to America, then covers annual events through 1646. Bradford’s work includes not just his history of the founding of Plymouth but documents (such as letters and treaties) involving the development of the colony.

A few resources for Bradford’s book:

Wikipedia’s entries on Of Plymouth Plantation (including the interesting journey of the manuscript) and William Bradford.

The complete book is available at the Early American Digital Archive.

Samuel Eliot Morison’s essay "Those Misunderstood Puritans” covers all of New England’s Puritans, but is helpful in understanding (as well as piercing both long-held and politically correct myths surrounding) the mindset of the average Puritan.

A few of the interesting characters and events in the book:

John Lyford, who said and did one thing to the colonists while communicating other things to England. During banishment deliberations it was revealed that he had raped a woman in Ireland, fathered a child out of wedlock, and constantly slept with housemaids.

Thomas Granger, who was tried, convicted and hanged for bestiality.

Thomas Morton (or as Bradford called him, the “lord of misrule”) and his ‘alternate’ community in Merrymount. Bradford is usually very even-keeled when describing events, but he unloads on Morton. Bradford apologizes for going “too long aboute so unworthy a person, and bad a cause.”

Isaac Allerton, acting as the colony’s agent, cheated Plymouth out of money in addition to saddling them with debt.

Bradford’s take on Roger Williams: “But he is to be pitied, and prayed for, and so I shall leave the matter, and desire the Lord to shew him his errors”, “a man godly & zealous, having many precious parts, but very unsettled in judgmente”.

William Brewster, a minister who came over on the Mayflower, receives a glowing memorial from Bradford.

Some general thoughts on the book:

While religion was a central aspect of the Pilgrims’ experience, the business aspect appears as a major focus. As I mentioned in Nathaniel Philbrick’s Mayflower, the Pilgrims were constantly being taken advantage of in many of their dealings. While they do show increasing business savvy (hiring an additional person to oversee a new agent, for example), some things were out of their control. The death of the lone ship carpenter, for example, would limit their trading ability until an adequate boat can be built.

Since Bradford was the governor of the colony for many of the years covered, his role in insuring safety and providing supplies merits special attention. Even though the book is written in the third person and often downplays his own role in events, Bradford proved to be an exemplary leader. The decision to make everyone responsible for growing and providing their own food insured adequate harvests after their initial communal system failed.

While Bradford appears to be a trustworthy fellow, I think it is important to keep in mind that there was a propaganda war centered on the colonies, a battle for how history was to be recorded and business interests awarded. Several times Bradford addresses charges against the colonists, such as Thomas Weston calling the Pilgrims “good beggars” or Isaac Allerton’s “infamouse & scurillous booke against many godly & cheefe men of the cuntrie; full of lyes & slanders, and fraight with profane callumnies against their names and persons, and the ways of God.” Conflicts arise between parties because of differing interests. These disagreements occur among and between different groups, including the various colonies, plantations and businessmen in England, religious and non-religious settlers, and settlers from different countries.

Into these conflicts add the potential for disagreement or physical confrontation with the Indians. Bradford provides an interesting outlook toward the natives, usually focusing on contractual obligations. The power struggle between Indian tribes drags the settlers into the mix at times, such as the Pequot War and the war between the Mohegans and Narragansetts (see the article on Uncas for a good summary). Bradford’s work makes it clear that disease had a major impact on the colonists as well as the Indians. He mentions the unsanitary conditions of the Indians aided the spread of disease and gave examples of settlers helping Indians when and where they could. The relationship between the colonists and Indians proves to be complex, with Bradford providing anecdotal examples of the two groups helping each other.

The direction the colonies are headed concerns Bradford. He worries that increased settlements, sprawling around the bay and westward, will change the sense of community that he feels is necessary for the colonists to flourish (spiritually as well as physically). “And others still, as they conceived them selves straitened, or to want accommodation, break away under one pretence or other, thinking their owne conceived necessitie, and the example of others, a warrente sufficente for them. And this, I fear, will be the ruine of New-England, at least of the churches of God ther, & will provock the Lords displeasure against them.” His entry for 1642 starts with a long musing on the reasons for the increase in evil deeds. “But it may be demanded how came it to pass that so many wicked persons and profane people should so quickly come over into this land, & mixe them selves amongst them? Seeing it was religious men that begane the work, and they came for religions sake.” The opening passages of this post demonstrate the ideals Bradford thought the colony should pursue and how he saw events unfolding.

To some extent it was inevitable that Bradford would be disappointed since there was a large percentage of non-religious settlers. Even for religious colonists conflicting goals, interests, backgrounds and work ethics were bound to create friction. But that did not stop him or other leaders from attempting to keep the initial intent alive. The opening of the New England Confederation in 1643 mirrors Bradford’s (and other Pilgrim’s) hopes from the first: “Wheras we all came into these parts of America with one and the same end and aime, namely, to advance the kingdome of our Lord Jesus Christ, & to injoye the liberties of the Gospell in puritie with peace…”. After finishing this book, I found it helpful to go back to read the opening chapters and the Mayflower Compact again to compare Bradford’s wistful mood at the end with what was intended for the Pilgrims’ colony:

Lastly, (and which was not least), a great hope and inward zeall they had of laying some good foundation, or at least to make some way therunto, for the propagating and advancing the gospell of the kingdom of Christ in those remote parts of the world; yea, though they should be but even as stepping-stones unto others for the performing of so great a work.

An aside: The last paragraph of Bradford’s work makes a nod to changes in the political landscape in England. Edward Winslow has been “detained longer than was expected” due to “the great alterations in the State,” a nod to Oliver Cromwell and the execution of Charles I. Writing in 1650, Bradford could not have known that the Commonwealth would be short-lived. Is part of his wistfulness the result of this change, providing an atmosphere the congregation at Scrooby had longed for? I don’t believe that to be the case since the stated aims of the Pilgrims are much more expansive than 'toleration'. In addition, there is almost a touch of bitterness aimed at Winslow for being gone so long without consent. Bradford feels he would be better used in the colony. While Bradford surely intended to write more (1647 and 1648 are noted but have no entries), this last paragraph sounds an odd final note to the book.